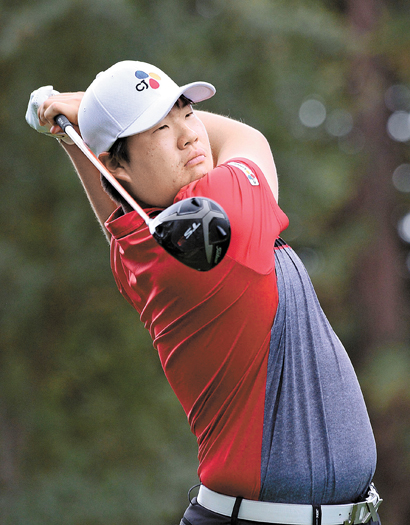 Im Sung-jae watches his shot during the first round of the Safeway Open at the Silverado Resort and Spa on Oct. 4 in Napa, California. [GETTY IMAGES/YONHAP]

Although the 2018-19 PGA Tour season just began, Im Sung-jae is already being mentioned as a strong candidate for the Tour’s rookie of the year.

Before the season opener on Oct. 3, PGA Tour posted “Top 10 PGA TOUR rookies to watch in 2018-19,” and Im was the top pick. Im earned his full-time PGA Tour status card this season by topping the 2018 Web.com Tour Regular Season money list, which includes his two victories.

“[Im] had a steady season from start to finish, proving he’ll be a strong candidate for TOUR success,” said the PGA.

Just as he did on the Web.com Tour, he quickly responded to the high expectations by leaving a strong impression at the season opener, the Safeway Open in Napa, California, on Sunday. Im finished tied for fourth at 13 under par, one shot short of joining a three-way sudden death playoff along with Kevin Tway, Ryan Moore and Brandt Snedeker of the United States. Tway ended up winning the tournament with a birdie on the third playoff hole.

Im, who started the final round four shots behind the leader, got off to a slow start with back-to-back bogeys on the first two holes. However, he finished strong with three birdies in his last five holes of the round to start his rookie season with a top-five finish.

“I wanted to play my game,” Im said after the round. “I stayed calm and finished strong.”

Born in 1998 on Jeju Island, Im started playing golf at the age of four. He was only nine years old when, in 2007, he became the youngest golfer in Korea to be recognized by the Korea Golf Association for making a hole-in-one. Continuing his success, Im joined the national team at the age of 12 and turned professional in 2015.

Im was still in high school when he played on both the KPGA and the Japan Golf Tour (JGTO) in 2016, finishing 75th on the KPGA Tour and 59th on the JGTO Tour money lists. Then during the 2017 season, the 19-year-old made a significant improvement by finishing 12th on the JGTO money list while earning eight top-ten finishes. On the KPGA Tour, he finished 53rd on the money list by playing in only five tournaments.

Rather than playing in the JGTO’s season finale in 2017, Im went to the United States to play in the Web.com Tour qualifying school, where he finished second. Though the 2017 season allowed Im to boost his golfing career, he didn’t have a professional win on his resume yet.

Having started his Web.com Tour without much expectation, Im wasted no time in getting recognition on the Tour with his win in The Bahamas Great Exuma Classic in January, the season opener. Im’s victory at the season opener allowed him to become the 16th player to win the event in its first appearance and the seventh Korean-born golfer to do so on the Web.com Tour.

He finished the season strong by winning the season finale, the WinCo Foods Portland Open. Although Im didn’t have a win between the first and last tournament of the season, he has still managed to maintain the top spot in the Web.com Tour money ranking, the only player to do so in the Tour’s history.

Standing at 1.81 meters (6 feet), Im is one of the Tour’s longer hitters, easily hitting his drives over 300 yards. Not only that, his experience on Korea, Japan and American Tours acts as another strength of his.

In addition, playing in the final group in his first tournament was another confidence booster for Im for the rest of the season.

“By playing with Snedeker [who won eight PGA Tour events throughout his career], I learned a lot,” Im said. “Snedeker was a player I watched on television since I was young. So, it felt interesting that I got to play with him. It was also a good experience to play in the champions group on the final day of my debut tournament.”

This week, Im will skip the CIMB Classic in Malaysia and prepare for The CJ Cup at Nine Bridges, hosted in Jeju starting on Oct 18.

“Now, even if I play against famous players, I don’t think I’ll get nervous. I have the confidence that I can play well,” Im said. “If I get a chance like this later in the future, I think I can play better.”