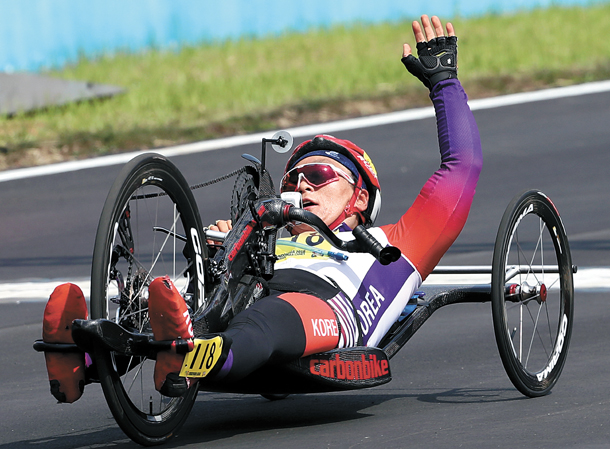 Prior to Tuesday’s victory, Lee also won gold in the women’s time trial race by clocking 21 minutes and 16.133 seconds. Once again, Wang took silver. With two golds, Lee successfully defended her title in both of the events, the first Korean impaired athlete to do so.

Lee, who was paralyzed from the waist down at age 19 after falling from a building, has been an all-around para-athlete. She started her athletic career with table tennis in 2007, at the age of 34, following a suggestion from her mother. In 2012, she switched to athletics, before becoming a para-cyclist in 2013.

Only a year after she started cycling, Lee qualified for the Korean national para-cyclist team and competed at the 2014 Incheon Asian Para Games. Lee’s Asian Games debut was more than successful as she won gold in both the time trial and road race. Lee further extended her success at the 2016 Rio Paralympic Games, winning silver in the women’s road race.

Following the Rio Paralympic Games, Lee once again expanded her athletic ability by starting para cross-country skiing at age 44, in November 2016. Once again, Lee didn’t have any trouble getting her name onto the national team roster, making her Winter Paralympics debut by competing at the PyeongChang Winter Paralympic Games in March. Although Lee failed to medal in any of the seven events she competed in, she still managed to complete all her races.

Following the Paralympics, Lee had no break as she immediately began training for cycling at the Para Asian Games this month. However, rather than feeling tired, Lee thinks that every day of training and competing is meaningful.

“Through training and competing in competitions, I feel alive,” Lee said prior to her departure to Indonesia. “The time’s going by too fast. I’m happy to be spending a valuable day every day. That’s why I keep challenging. I want to try everything I can.”

After the women’s race, Korea also took another gold in the men’s competition as Yoon Yeo-keun completed his race in 1 hour 29 minutes and 4.918 seconds.

On day four of the Indonesia 2018 Asian Para Games, Korea continues to strengthen its second place standing with 20 golds, 16 silver and six bronze, as of 6:30 p.m. Tuesday.

The unified swimming team, too, found success by winning bronze in the men’s 400-meter freestyle relay on Monday after accepting the judge’s final decision on Tuesday.

During the men’s 400 meter freestyle relay final on Monday at Gelora Bung Karno Aquatic Center in Jakarta, the Korean team finished third, behind Japan and China, with a time of 4 minutes and 24.95 seconds. Shortly after the race the judges disqualified Japan for a false start and the unified Korean team was awarded silver instead of bronze.

However, the judges’ decision was overturned after Japan appealed. The unified team refuted the appeal, but ultimately failed to win over the judges. Due to the continuous complaints and appeals, the medal ceremony was postponed.

Although Korea finally accepted bronze, they now face another problem. Once the final decision was made, the Asian Para Games organizers decreed that only South Korean para-swimmers will be allowed to stand on the podium as they were the only athletes that raced in the finals. In the heat race, two South Koreans and two North Koreans raced together but in the finals, four South Koreans competed.

“It’s a decision that goes against the message of the unified Korean team, which is peace and harmony,” South Korea’s chief manager Jung Jin-owan was quoted as saying on Yonhap. “We’ll use every channel available to allow both North and South Korean athletes to stand on the podium.”

This is the first ever medal won by the unified team at an international sporting event for impaired athletes.