Suk Hyun-jun is ready to fight for starting spot

Suk Hyun-jun is ready to fight for starting spot 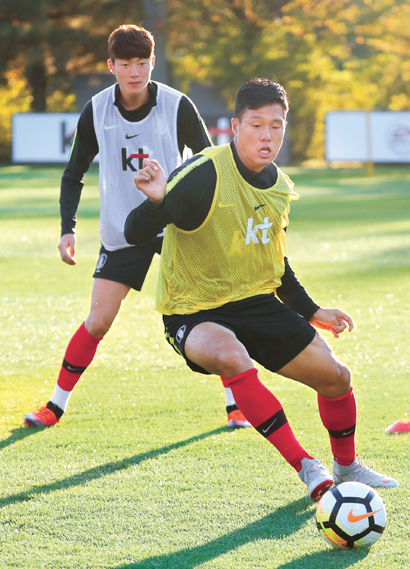 On his return to the national team after two years away, Korean striker Suk Hyun-jun said Monday he is ready to make his case for a starting spot.

Suk is one of the 25 players selected by Paulo Bento for Korea’s friendly matches at home this month. The Taeguk Warriors will take on Uruguay on Friday and will meet Panama four days later.

The Stade de Reims striker has four goals in 11 caps for Korea.

While other national team members arrived at the National Football Center (NFC), the national team’s training ground, in their agent’s or families’ vehicles, Suk was the only player who arrived by taxi.

“It felt awkward when I arrived here again,” Suk told reporters at the NFC in Paju, north of Seoul. “I feel like I have to adjust to the national team again.”

Bento said he decided to test Suk after FC Augsburg forward Ji Dong-won became unavailable due to injury. Suk, who had stints with Portuguese clubs FC Porto and Vitoria Setubal, said he has big expectations playing for Bento.

“I heard that he is charismatic and had good results with the Portuguese national team,” he said. “I feel honored and thankful to be with the national team. I know I have to really work hard.”

Suk is likely to compete for a starting spot against Hwang Ui-jo, the Gamba Osaka striker who was the top scorer at the Asian Games. Suk said he is ready for the competition.

“Wherever you go, there’s competition and a starting spot doesn’t come for free,” he said. “I think I’m physically strong and a powerful forward. Hwang has good shooting skills, but I’m a player who can fight with defenders inside the box.”

Suk has been frequently mentioned as a reliable striker in major tournaments, but he rarely made the final roster. The only major tournament he competed in was the 2016 Rio de Janeiro Olympics.

“I had injuries before this year’s World Cup, but I guess avoiding injury is also a skill,” he said. “I know I wasn’t able to satisfy the coach’s standard, and maybe that was the reason why I was left behind at the last moment.”

While his younger teammates avoided their mandatory military service by winning gold at the Asian Games, Suk, 27, has yet to clear the national duty. When asked about his plans for military service, Suk said he is looking for a solution.

“I signed a four-year contract with my current team, and I’m looking for ways to postpone my military service until it expires,” he said. “It’s not that I’m going to dodge the military service. I want to solve it in a good way and will announce the results later.”