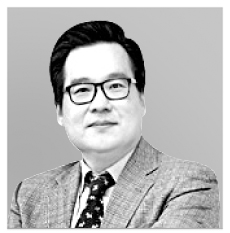 Ahn Min-ho
The author is a professor at the School of Communication and Media at Sookmyung Women’s University.

Korea is home to global hardware brands like Samsung Electronics and Hyundai Motor, but does not host any innovative software names such as YouTube, Google or Facebook. About 18 years ago a Sookmyung University team created a video-sharing platform called Olive Cast, where anyone can easily upload videos they had created. It closed down a year later despite many regular users. Apart from technological and financial setbacks, the platform did not last because of distrust in a novel system where anyone can easily upload video content. The unfamiliar concept felt dangerous. A few years later, an online site surprisingly similar to Olive Cast caused a splash in the U.S. and elsewhere. The site grew to be the world’s most well-known media platform, YouTube.

Koreans are avid users of YouTube. Against the waning popularity of Twitter and Facebook, YouTube rivals terrestrial TV channels in terms of the time spent on the media platform. Various problems have cropped up because it has become so common. The government recently released the outline of a new expanded broadcasting legislation that would place streaming services under the same regulatory watch as mainstream media content. Authorities claim it is necessary to bring new media into the legal regulatory system and address reverse discrimination issues with domestic paid-services against foreign names like Netflix. But some already suspect the move as regulation against right-wing local YouTube channels critical of the liberal administration in a campaign to throttle fake or adverse news and contents.

Freedom of expression and censorship have always been a hot potato. Proponents of regulations claim unregulated communication can exaggerate problems and stoke unnecessary fear and confusion to argue that communicators should be restricted to licensed people. They believe that lies can be highly infectious and unsettle society.

In another aspect, popular communication can be cleverly bent to oppress and manipulate views to suppress disgruntlement, criticism and desire for change. Social communication that can substitute capital and power can make people comply with an existing system, stay indifferent to problems and force them to obey mainstream values. The former can be conservative views and the latter progressive or socialist ones. Both do not trust the market where opinion and thought is freely exchanged.

There is also a liberal view that argues for maximum freedom of speech and a right to be heard. Under such a claim, free social communication can act as important physical and psychological grounds to allow different people to understand one another, compromise and co-exist in society. Anyone must have the right to speak without regulation and be respected for his or her view. That can be possible when there is an innate belief that good and bad can be naturally filtered out in an environment of fair and free competition.

It is hard to say which of the three views is right. Today’s world is very complicated and different views can help better understand reality. One thing is certain, a society with predominantly conservative or progressive views cannot generate innovative enterprises like YouTube.
YouTube brings together a diverse range of people with different propensities and features. It is a platform that can feed the public with content unavailable and impossible to access via mainstream media. It is why even those in their 60s are turning onto the platform that used to be the realm of young people seeking oddities and novelties.

Today’s YouTubers are different from the public who blindly follow universal values. They are connected but stay individual. Contemporaries seek out differentiated and extraordinary ideas and experiences. Mainstream media falls short of living up to such a desire. It is ridiculous to try to regulate it with an old system. The move is suspected of political motivation as the criticism against the mainstream press suddenly shifted to the so-called fake news distributing channel.

If surveillance is needed, regulation should be kept to the minimum. Instead of outright interference, authorities must help build an environment that can self-regulate. Even if it looks unsettling at first, faith in the market can breed innovation.