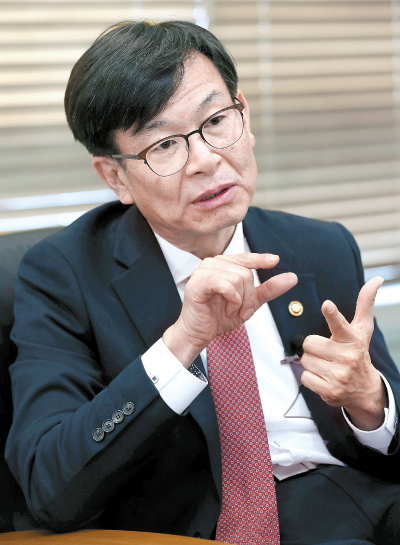 Fair Trade Commission Chairman Kim Sang-jo during an exclusive interview with the JoongAng Ilbo on Sept. 27 at the Korea Chamber of Commerce and Industry in central Seoul. [CHOI SEUNG-SHIK]

Fair Trade Commission Chairman Kim Sang-jo once again took aim at the business model and corporate structure of Korea’s chaebol during an interview with the JoongAng Ilbo on Sept. 27.

“A decision-making structure that will take responsibility or make difficult judgments is absent,” Kim said. “The biggest problem with chaebol is that the current status will continue for quite some time.”

He said the only way for the Korean economy and business groups to overcome the difficulties that they face is for the second and third generation of conglomerate founding families to make a decisive decision that shows their willingness to take responsibility and share their overall plan in reform chaebol.

“The key is for the second and third generation to take the role of board chairman focused on making adjustments and modification [of the general direction of the conglomerate] rather than the current role of a CEO where they are receiving reports on everything and giving orders,” Kim said. “This does not mean that they should be moving off the stage and only acting as shareholders that receive dividends.

“They should leave daily management to the experts and focus on coordination in enhancing the internal energy [within conglomerates] while communicating with external parties.”

The consolidated oversight system is a monitoring system that was adopted by the Financial Services Commission in July that evaluates the soundness of financial affiliates owned by conglomerates as a single entity rather than independently. The goal is to prevent insolvency spreading among conglomerate affiliates through risk management.

Kim, nicknamed the Chaebol Sniper, has been digging into issues surrounding chaebol for nearly 20 years while working at a civic group.

He said he didn’t mind the nickname and, in fact, considers it a complement.

The Chaebol Sniper showed his willingness to push forward with chaebol reform.

“It’s been 30 years since reforming chaebol has become our society’s project,” Kim said. “Yet it has failed.”

He said the reason behind this failure was largely because we have been focused with a limited scope. He said that in order to be sustainable, reform laws including commerce, finance, tax and criminal laws should be enacted as a single unit. Simply put, the reform of chaebol should be discussed by all government departments as a whole.

Q. What’s the problem with chaebol?

A. Chaebol themselves are faced with difficulties. This is not a problem exclusive to corporate governance but rather a more fundamental risk. There aren’t many companies that are like Samsung Electronics that have been breaking new records one after another in operating profit. We’re facing a situation where the overall industrial structure of the Korean economy needs to be reformed. The problem chaebol face today is the risk in their business models and governance.

Isn’t that the general risk that all companies face?

When you look back on the progress that the Korean economy has made, there hasn’t been a time like the one we face today. Even in the late 1990s and late 2008 when the country was faced with an economic and financial crisis, the direction was clear. We were sure we could make a leap forward once we solved certain problems. But today we’re not sure where we should go and how we will overcome the difficulties that are upon us. There’s not many companies with a decision-making system that can make difficult choices and take responsibility. It makes you wonder if the second and third generation [of chaebol founding families], who have inherited their businesses, are hesitant in making decisions.

Is corporate governance a problem?

Conglomerates 30 years ago were relatively small compared to the size they are today. Back then it was possible for heads of conglomerates to know everything that was happening with the group and make orders accordingly. Today, such management is impossible.

A CEO type leadership where the head of the organization hears everything and gives orders is difficult in today’s environment.

That is why there needs to be a role that coordinates and collects the internal mood within the organization and communicates with outside parties. The second and third generation should make the transition and the necessary adjustments and fine tune the organization rather than acting as CEO.

Are you asking them to step down?

Not at all. This does not mean that they should step back and become shareholders that only get paid dividends while separating ownership and management. They should leave the daily management to the experts and focus on the bigger picture. Their title isn’t important.

Is there a successful role model?

Twenty years ago, LG converted into a holding company structure. It decided early on to change course and it has served the company well. Google also creates a holding company that fine tunes all of its businesses. Sweden’s Wallenberg Group has passed down its management rights for four generations, yet the Wallenberg family doesn’t intervene in the management of each and every affiliate.

LG might have faced difficulties 20 years ago. I understand that a holding company isn’t the ultimate solution. [Samsung] could decide to convert into a holding company or make small changes to its current governance. But if they choose to keep the current structure or make only a few changes, they may face legal risks involving the complicated cross-shareholding governance. The more time that passes, the higher the cost will be.

What is the Kim Sang-jo approach to chaebol reform?

In large, there are three approaches. One is to execute the existing law vigorously. It is very important to send out a signal that the government will no longer tolerate illegal practices. The second is to help companies [voluntarily] make changes in response to the first move. The third is to fill up the blind spot [which may have been missed in the first two steps] through reforming the law. These are what we have been trying to put in the overall reform bill on the fair trade law.

Will it be effective?

The economic regulation system works effectively only when the prevention regulation and post-surveillance work simultaneously.

How will it work?

However, a business group the size of Samsung Group has to make a pre-emptive judgment that considers how Korean society will change in 10 years. Advanced economies since the 1970s have worked and succeeded in settling post regulations where financial companies’ risks are frequently evaluated. I think [the consolidated oversight system] is a process that will complement the regulation separating the cross shareholding of financial companies and nonfinancial companies.

Is this a sustainable reform?

Then what is important?

On affiliates paying brand usage fees, we have to look into what standard has been applied and why affiliates pay. Answering these questions by making information public should be the starting point.

The income sources should be properly explained to shareholders and the market, and companies should be penalized for illegal profiting such as giving exclusive business to affiliates.

When cutting off the route to illegal practices, reform can then be sustainable and holding companies have no other choice but to raise their stake in affiliates.

There are those that argue that [the government] needs to encourage business.

“Encouraging business” is a compelling expression. But at the same time, it raises questions. In Korea, the meaning of encouraging businesses is to solve compliancy issues that companies face. However, for the Korean economy to have a promising future, the playing field needs to be leveled so that SMEs and mid-sized groups can compete fairly. Creating a fair competition environment is important. Such encouragement is urgently needed.

The unfair practices committed by global ICT companies are a major issue.

The legal suit over Qualcomm is currently in progress while we are investigating Apple and Google. Some of the issues have already ended and are currently in steps toward a final decision. I am well aware of the need to apply strict competition law against companies that use their dominant position in the market, whether it is local or foreign. We are currently working hard and will soon reach a conclusion.

Three former heads of the FTC has been indicted, and the FTC’s exclusive right to report to the prosecutor’s office is on the verge of being passed to other institutions. It seems the internal mood within the FTC isn’t good.

I fully understand the feeling of loss and the frustration that employees feel. The fundamental problem needs to be solved. Honestly, there aren’t many opportunities for FTC employees to be reemployed in other companies or institutions.

We don’t have affiliated state-owned institutions [to fall back on] and, because of our nature of overseeing companies, moving to the private sector isn’t easy. Eventually, our employees need to grow as experts on antitrust laws, and it is important for us to create an infrastructure where their skills are recognized outside the organization. It is my biggest concern today.