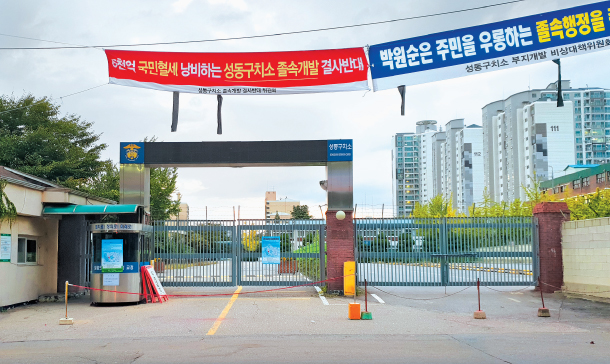 The government announced a plan to build more housing to cool the real estate market late last month, and it is already receiving backlash.

Two of the 11 areas designated for new apartment construction in Seoul - the former Seongdong Detention Center in Songpa District and Gaepo-dong in Gangnam District, both in southern Seoul - are the subject of heated debate from local residents.

Plans for public housing in the detention center area are likely to be canceled due to opposition from local residents. The value of real estate in the areas surrounding the designated construction zones is growing, however. If the plans for public housing are canceled, some are concerned that only the wealthy will be able to purchase the apartments.

The mood at the old prison

Just 100 meters (328 feet) away from Ogeum Station, a major transfer point, is a tall wall that used to separate the city from the inmates at Seongdong detention center. The detention center relocated to its new building in nearby Moonjeong-dong in June 2017.

Barbed wire still remains at the top of the wall. The former prison’s front gate is shut, but a banner that reads “strongly oppose the hasty development of Seongdong detention center” has been draped across it.

The government announced that 1,300 new apartments would be built in the area as part of the plan announced in September.

Local residents fiercely opposed the plan after they learned that most of the apartments would be public rentals. They expected a private redevelopment after the relocation of the detention center, which was considered the primary factor hurting the neighborhood’s real estate value.

Residents formed an opposition committee and demanded the construction of facilities for culture, art and youth employment, which were promised by the Seoul city government. Songpa District head Park Seong-su of the ruling Democratic Party agreed with angry residents, and said “[The government] did not consider the situation of Songpa District and its residents who are most affected.”

The Seoul government had already announced last year a plan to build 1,000 to 1,100 new apartment units on 51,975 square meters (12.8 acres) in the area. The city’s development plan for the area also included education, culture and youth start-up centers as well as other public facilities on an additional 26,483 square meters of land.

The government’s latest measure adds to Seoul city’s original plan by adding 200 to 300 units and an additional 6,000 square meters of land.

The Seoul government tried to appease local residents after the Land Ministry announced its plan in late September. It insisted that it will push forward with its initial plans to build community centers and said that most of the apartments will be sold to owners before their construction rather than designated as public housing.

Many neighborhoods oppose public housing apartments from being built in their neighborhood. They fear that accepting poorer people into the area will affect education quality in the area’s schools and drive down the value of apartments.

The Land Ministry’s current plan is for 700 of the 1,300 apartments to be designated as a “newlywed hope town.” They will give priority to low to mid-income couples who recently married or are planning to. They can either buy the apartments or rent them for a minimum period of ten years. The ministry has not indicated what will happen with the other 600 apartments.

The Seoul Housing and Communities Corporation (SH), a company owned by the Seoul city government, has the rights to the land in question. An official from SH said the Seoul government has all but decided to designate the apartments be sold just as regular apartments. The only decision that hasn’t yet been made is whether SH will personally build the apartments or pick a construction company.

“The mood has quieted down after news that government rental housing won’t be built and facilities will be established as planned,” said a neighborhood realtor who requested anonymity. 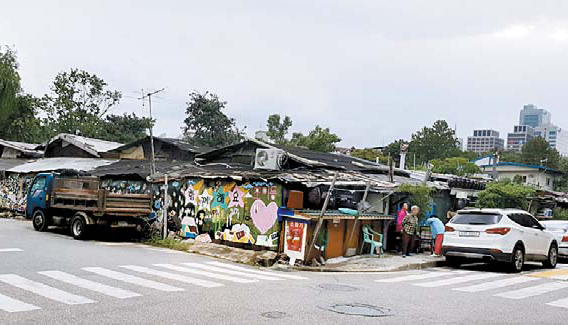 The entrance to a shantytown in Gaepo-dong, Gangnam District. The area’s reconstruction plan will provide housing for 340 newlywed couples. [LEE HYUN-SANG]

This village, one of the last shantytowns south of the Han River, lies across a bridge from Yangjaecheon stream, about a five minute walk from Maebong Station on Line No. 3. Currently, 60 households live in the area. People first settled in the Gaepo-dong shantytown after they were forced out of their homes in the late-1970s, when Seoul underwent large-scale development.

The neighborhood’s atmosphere was surprisingly calm on Oct. 1.

“We don’t really know. I suppose the country will provide a good [relocation] plan,” said a woman in her 70s who was shopping for groceries from a truck vendor. She seemed to be aware of the sharp rise in interest in the area from outsiders.

Old tin-roof buildings and makeshift homes dotted the narrow alley that runs through the neighborhood. Some homes were left empty after a fire in 2011. Tower Palace, one of the most expensive apartment complexes in Seoul, is visible from the area, its buildings peeking above a low roof blackened by coal tar.

While residents were reluctant to speak about the new apartment construction, the general mood was that the relocation plans for residents, which had been delayed for years, were reaching a breakthrough.

Although the area was designated for public development back in 2012, a clear plan for the current resident has yet to be decided upon. Seoul is considering whether to provide the residents with 60 homes out of the 340 apartments in its planned project, which is also aimed at newlyweds.

However, there are problems that still need to be resolved, including compensation for land. The Gangnam District Office has been imposing an annual fine on households in the area of around 1.3 million won ($1,150) for illegally occupying the area since 1991.

The government seizes assets if someone cannot pay a fine. If a person has no assets five years after the fine was first issued and cannot pay the fine, then the fine is dismissed. But if the government finds that someone received income or owned assets during that five year period, then the fine is revived and they will have to pay it. The residents are worried that on top of being forced to relocate due to the development they may be forced to pay the fines.

The government has not yet come up with a concrete plan to relocate local residents.

Permanent rentals or public housing are options, but the project operator faces issues such as financial constraints and worries over fair housing distribution.

“Residents are willing to wait until Seoul releases their specific plan,” said Chung Han-ho, an official at Gangnam District’s public housing support division. “There are many cases where the fines are dismissed, which wouldn’t be a major problem.”

The pre-construction sales prices of the apartments built on the Seongdong detention center and in Gaepo-dong will be limited, as they will be built on government-owned land.

Real estate prices are rising in nearby areas, as expectations are growing that winning the lottery for the new apartments will guarantee big profits.

The pre-construction prices of the small apartments planned for the Seongdong detention center area are expected to be around 500 to 600 million won. A person who wins the apartment via a random lottery could make a profit of at least 300 million won, considering the recent sale of the 59-square-meter apartment across the street. This situation is spurring concerns that the government’s plan to cool the market by building more apartments will actually overheat it even more.

There are also concerns that the apartments for newlyweds, whose preconstruction sale prices are estimated to be around 500 million won, may end up going to the rich.

The apartments are limited to newlywed couples with a combined annual income of less than 78 million won. Such couples likely wouldn’t have the financial resources to buy such an expensive apartment without the help of their parents.

The government’s Sept. 13 housing market plan extended the ban on sales of apartments built on public land to eight years from six, depending on the ratio of preconstruction sales price to surrounding market value. It also increased the amount of time that residents have to live in the apartment from three years to five.

This measure was put in place to prevent people from profiting off of rising apartment prices shortly after purchasing one.

“There is a problem when only a few are reaping profits when rental housing is placed in expensive areas,” said Shim Gyo-Eon, a professor of real estate at Konkuk University. “Instead, it would be better to help those who need housing by providing housing support fees by raising as much profit as possible.”