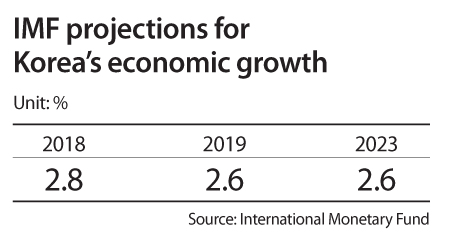 The International Monetary Fund (IMF) lowered its outlook for Korea’s economic growth this year and next, citing trade tensions between the world’s two largest economies, slower momentum in global trade and financial turbulence in emerging countries.

In its world economic outlook (WEO) released Tuesday, the IMF cut its growth forecast for this year to 2.8 percent from 3 percent.

Next year’s projection was reduced to 2.6 percent from 2.9 percent.

The report painted grimmer prospects for the overall global economy this year and next, trimming its predictions by 0.2 percentage points each to 3.7 percent for both years.

The agency cited the trade war between the United States and China as the main factor for the changes.

“Escalating trade tensions and the potential shift away from a multilateral, rules-based trading system are key threats to the global outlook,” the report said, “Since the April 2018 forecast, protectionist rhetoric has increasingly turned into action, with the United States imposing tariffs on a variety of imports, including on $200 billion of imports from China, and trading partners undertaking or promising retaliatory and other protective measures.”

Asia’s advanced economies including Korea and Australia were affected by the disputes, it said.

“The downward revisions to the 2019 growth forecast for Australia and Korea relative to the April 2018 WEO partially reflect the negative effect of the recently introduced trade measures,” it said.

At home, Korea faces its own headwinds such as a deteriorating job market, growing debt levels and weak investment.

The revisions are in line with predictions by other research institutes and agencies.

Last month, the Organization for Economic Cooperation and Development (OECD) downgraded its growth estimate for Korea this year to 2.7 percent from the previous 3 percent while multinational investment companies also trimmed their projection.

The central bank has a more sanguine forecast of 2.9 percent, but the Bank of Korea will likely revise downward its estimate this month.