Social media can trick you into purchases better avoided

Social media can trick you into purchases better avoided

Social media can connect companies with potential customers like no technology before it. 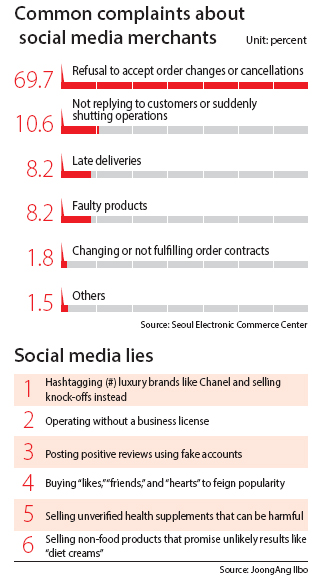 But a lack of regulation over advertising heightens the potential for dishonesty or even fraud, making online shopping a somewhat risky business for consumers.

Last year, Koreans purchased nearly 80 trillion won ($70.3 billion) of goods online, some 15 trillion won more than the previous year, according to Statistics Korea. Beginning from 2016, more online purchases were made through mobile devices than computers.

The Mimi Cookie scandal recently highlighted the dangers of shopping using social media. Last month, the popular online bakery was caught cheating on its claim of selling handmade, organic cookies. In fact, it was reselling cookies from Costco.

Mimi Cookie’s problem was being too popular on social media. People raved about its wares on social media, the orders flooded in and the bakery had no means to fulfill them.

With limited information available on online sellers, customers must rely on other users’ reviews - and they can be wrong, misleading or even fake.

That can lead to disappointment, being ripped off - and can even endanger customers’ health.

In an era in which online fame translates into monetary rewards like higher sales, businesses try to get as many followers and “likes” on their social media pages.

Many are willing to pay to appear more popular, and that has created a whole industry known as “click farms” that can provide the extra “likes.”

Type “how to increase likes” into Naver and dozens of results pop up. These businesses claim to be able to promote pages on all social media platforms including Facebook, YouTube and Twitter. Some offer specialized services on YouTube to write comments in styles desired by the customer.

Click farms can fulfill client orders for “likes” and positive user comments within five minutes of accepting payments. Their preferred method of communication with clients is texting via messaging app Kakao Talk.

“Though the accounts [that comment and like] are not of actual people, they appear genuine because they have realistic pictures and a bio,” said a click farm operator when the JoongAng Ilbo inquired about its services.

“Our services will boost your business’s credibility and fame,” the operator added.

These businesses often collect personal information floating around the web to create false accounts and then develop a program that can post hundreds of “likes” or comments with one click on a social media page or post.

While buying likes or positive comments is obviously dishonest - and South Korea’s intelligence agency has gotten in hot water for such behavior during elections to support candidates - there aren’t any regulations that ban such activity.

Facebook and other social media platforms delete accounts that do not act in compliance with their guidelines, including the use of click farms. But they don’t take any legal action, leaving click farms fearless and ready to create new fake accounts whenever old ones are detected and deleted.

YouTube stars are some of the biggest social influencers of the day.

If their videos are interesting enough, millions of subscribers will tune into what the YouTube stars say, do and buy every time a video is uploaded.

Businesses, hoping to cash in on their powerful reach, pay generous sums to YouTube influencers in return for their endorsement of products.

Channels of famous YouTubers often end up as businesses themselves, and they hire management agencies to help negotiate sponsorships and maintain a positive public image.

Recognizing that YouTubers could use their influence to promote products that have not been tested or verified, the Fair Trade Commission (FTC) began clamping down on misleading advertisements on YouTube from last month. Previously, the antitrust watchdog had only investigated false advertising on online blogs.

“So far, we have confirmed very few cases where YouTubers have accepted payments from sponsors [without publicly disclosing their financial relationship],” said a FTC spokesman earlier this month.

The FTC will continue to watch for YouTubers who endorse products from sponsors without disclosing their financial relationships to viewers. Some of the most frequently endorsed products include dietary supplements, cosmetics and electronic appliances.

With thousands of fake advertisements and reviews on social media, some gullible users are fooled into making purchases that don’t live up to promises.

Detox foot pads that promise to detoxify the body created a big buzz on social media earlier this year.

“I didn’t know I had so much bodily waste. I applied the pads on the soles of my feet overnight and they helped me lose weight,” one review said on Facebook.

Sellers claimed that the pads, which users stick onto their feet while sleeping, are certified safe and patented by the U.S. Food and Drug Administration. One of the largest sellers claimed to have sold an accumulated 100 million patches.

That product ultimately failed the smell test: People on social media scoffed at it and sales fell. But social media platforms are still flooded with advertisements for products guaranteeing unrealistic results, like weight-loss creams. But video ads appear particularly genuine as businesses hire professional models and actors to have them act pleasantly surprised after testing products.

Once users click on such a video, social media platforms take that as a sign of interest and supply an endless chain of similar videos on their news feeds.

Those videos often have thousands of likes and comments by both fake and real users vouching for the products.

Many sellers don’t even have a website and communicate with consumers through messaging apps. This leaves customers unable to do anything when merchants run off with their money.

In the first half of this year, Korean consumers filed 489 complaints about online transactions, 18 percent higher on-year, according to the Seoul Electronic Commerce Center.

The most frequent complaint was about merchants who refused to accept order changes or cancellations, and merchants who did not respond to texts or calls.

“Consumers have reported a rise in problems shopping via social media platforms Naver Band, Instagram and Kakao Story [in recent months],” said a spokesman from the Seoul Electronic Commerce Center. “To prevent scams, consumers should check to see if the seller has a proper business license number.”