In past, staring at screens was popular, too: The folding screen was a high mark of Joseon Dynasty art

In past, staring at screens was popular, too: The folding screen was a high mark of Joseon Dynasty art

A visitor looks at a 10-panel folding screen depicting Mount Kumgang at the “Beyond Folding Screens” exhibition at the Amorepacific Museum of Art in Yongsan District, central Seoul. [YONHAP]

Koreans, especially during the Joseon Dynasty (1392-1910), loved folding screens. The famous folding screen of “The Sun, Moon and Five Peaks” was used as an emblem of the royal authority during the dynasty and was always being placed behind the king. For nobles, large folding screens that can measure up to four meters in lengths depicting birds, flowers, mountains or chaekgeori (drawings of books and study rooms) were used for fancy interior decoration. Ordinary people also used screens for events like weddings, birthdays and ancestral rituals. Joseon was the era of the folding screen.

An exhibition recently kicked off at the Amorepacific Museum of Art - which is inside the cosmetics giant’s new headquarters in Yongsan District, central Seoul - allowing visitors to take a look at an array of folding screens from the Joseon Dynasty (1392-1910). Titled “Beyond Folding Screens,” it is the museum’s second exhibition since its relocation and the first on traditional Korean art. The museum’s first exhibition in the new building, designed by British architect David Chipperfield, was “Decision Forest,” showcasing work of contemporary electronic artist Rafael Lozano-Hemmer.

“The Joseon Dynasty was the period in Korean history that witnessed the greatest development of painting,” said Hyun Moon-phil, researcher at the museum, “and it is this period in which great numbers of folding screens were produced and utilized.” 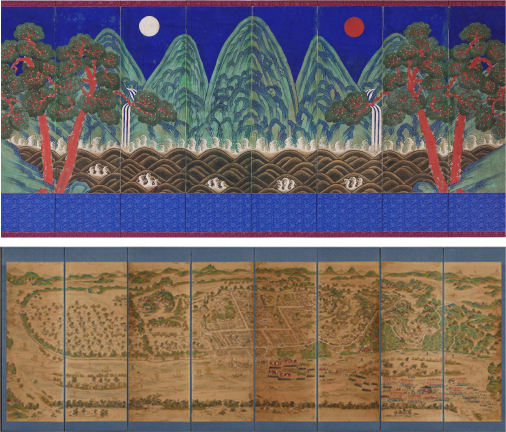 Top: “The Sun, Moon and Five Peaks,” is a famous folding screen that was used as an emblem of royal authority by the Joseon kings. The painting features the sun, the moon and five peaks. Above: This folding screen depicts a scene of Pyongyang and a procession by the governor of Pyongan Province. [AMOREPACIFIC MUSEUM OF ART]

The Amorepacific Museum of Art managed to bring in 76 folding screens for the exhibition. They are divided into eight sections, says Pyun Ji-hye, one of the curators of the exhibition.

“We decided to install this folding screen at the beginning of the exhibit as the two Koreas are on better terms and visitors can look at the painting and get their hopes up that South Koreans may soon be able to visit Mount Kumgang,” said Pyun. “The painting is quite humorous as the artist personified the peaks. Some peaks are also in the shape of animals if you take a closer look.” 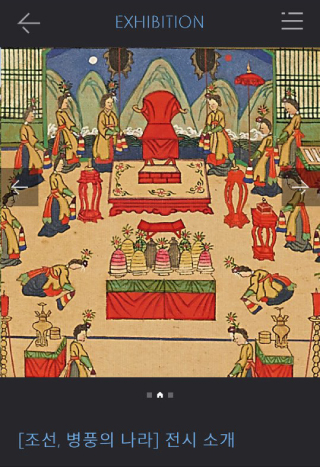 A smartphone application offers an audio guide in Korean and English. [SCREEN CAPTURE]

Pyun said such a humorous feature proves that the painting was drawn during a transitional period when folding screens became more commonly enjoyed by ordinary citizens.

There’s a folding screen that Emperor Gojong presented to Carl Andreas Wolter, who was then the head of Meyer & Co., the Korean branch of a German trading company which was the very first foreign company to locate in Korea. After the signing of the Protectorate Treaty between Korea and Japan in 1905, Korea lost its diplomatic sovereignty, and foreigners like Wolter had to leave Korea in 1908. Feeling sad to part with Wolter, the emperor turned a painting into a folding screen. In 2013, the museum purchased it from the Wolters and brought it back to Korea.

Titled “Daoist Immortals Crossing the Sea,” the painting shows Daoist immortals on their way to attend a banquet of the Queen Mother of the West by the Turquoise Pond, Pyun explained.

There’s also a painting of “Pyongyang” on display, which is registered as Seoul Cultural Heritage item No. 176. The screen depicts a panoramic view of the Pyongyang region and a procession by the Governor of Pyongan Province. According to Pyun, the drawing was based on “A Map of Pyongyang in the Pyongyangji” (records of Pyongyang, 1590).

To help visitors understand the exhibit, the museum offers a smartphone app called APMA Visual Guide, which can be downloaded from an app store. After connecting to the museum’s free wi-fi and entering the verification code, which is on the admission ticket, visitors can hear an audio guide in Korean or English.