[National Treasure] Symmetrical ornaments for the crown of a queen

[National Treasure] Symmetrical ornaments for the crown of a queen 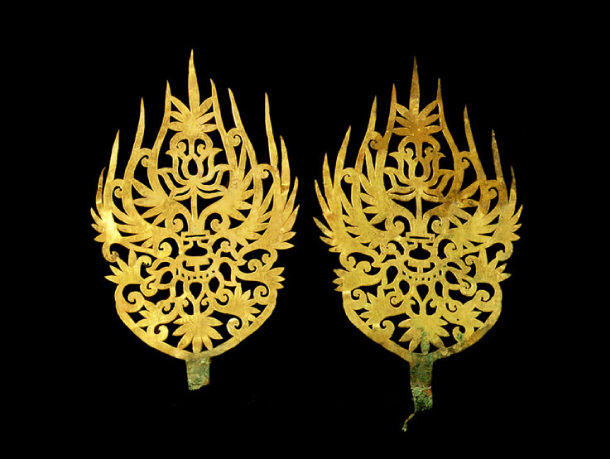 This pair of golden ornaments for a crown are identical in size and shape. They were excavated from the Royal Tomb of King Muryeong in Gongju, South Chungcheong. They are 22.6 centimeters (8.9 inches) tall and 13.4 centimeters wide.

When the royal tomb was discovered in 1971, these ornaments were found placed on top of each other at the head of the queen’s coffin.

A gold plate was cut to form these symmetrical ornaments with the use of sharp tools.

A vase can be seen in the center, with honeysuckle-shaped patterns emerging. A lotus-shaped plate supports the vase.

Above the vase is a flower in full bloom. There is a flame pattern on the edges from the middle to the upper part of each ornament. These ornaments are a little smaller than those for the king’s crown, which were discovered at the same site.

Both are simple in design and there are no special attachments such as beads.

It’s one of the most well known royal tombs. Unlike many other tombs, it was built with bricks, and a great amount of burial goods - 2,906 pieces in 108 categories - were excavated.

They have been important sources for studying the Baekje Dynasty, particularly its culture and customs.

Among the goods found, a jiseok, or slab of stone inscribed with the deceased’s dates of birth and death together with his achievements, reveals the exact date of construction.

The Royal Tomb of King Muryeong is the first among all the tombs from the Three Kingdoms Period (57 B.C.-A.D. 668) that records the name of the buried king.