To commemorate the 53rd anniversary of its founding, the JoongAng Ilbo is running a special series of reports on the development of a market economy in North Korea.

The JoongAng Ilbo teamed up with the Institute for National Security Strategy (INSS), a national security research institute under the National Intelligence Service, to interview recent defectors on the current state of North Korea’s economy. Interviewees ranged across economic classes and geographical areas. They included some higher level defectors with knowledge of the regime’s economic policies and how they are changing.

Names have been withheld or changed for the defectors’ security and that of their families still living in the North. - Ed. 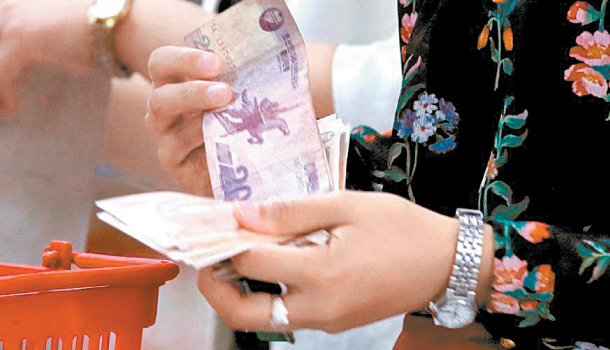 A woman counts her money in North Korean won at a supermarket in Pyongyang on Sept. 12. More and more people in the country are relying on private markets to meet their daily needs. [AP/YONHAP]

Even as international sanctions continued to mount on North Korea, and fears rose of massive shortages, the price of rice - the nation’s staple - remained stable.

Analysts familiar with recent economic changes in the North offer an explanation. Prices remained stable, they suggested, because wealthy retailers controlled supply by releasing their inventory of such goods onto the market.

These entrepreneurs, known in Korean as the donju, which loosely translates as “masters of money,” are said to be the invisible hand of the North’s growing economy - working for both profit and stability.

Acutely aware of developments domestically and abroad, this new mercantile class preempted possibilities of an economic shake-up when international sanctions were announced by ensuring merchandise got into the hands of smaller vendors even if payments had to be deferred to a later date.

The donju are involved in a wide array of businesses, from retail to smuggling, but their primary role is money-lending, thanks to the enormous quantities of foreign capital at their disposal.

One defector who escaped the North last year says the donju have recently accumulated such influence that they virtually control prices in the market, particularly thanks to their command of a vast smuggling network from China that bypasses international sanctions.

If North Korea’s rapidly growing real estate market is any indication of the country’s inching towards capitalism, the donju can be seen as the principal drivers.

In the way they are characterized by defectors, the donju appear to be not all too different from the nouveau-riche of any rapidly growing economy, sporting luxury automobiles and living in the best residences money can buy - within the meager limitations of North Korean society.

Many donju wield prestige comparable to local party leaders, defectors say, and that influence goes a long way to expand their wealth even further.

In the past, people with more than $50,000 were regarded as donju,” said one defector who used to do business on the North Korea-China border. “Now, even in the provinces, you need to have at least $1 million to call yourself a donju.”

The managers of some rural factories, who are party cadres, often must resort to supplicating local donju to obtain the raw materials necessary to maintain production.

The donju have come a long way from beginnings that were humble. Many started off as shuttle traders moving merchandise across the border with China, while others went abroad as part of government-sponsored enterprises aimed at generating foreign currency, like managing a team of laborers at sweatshops in China or Malaysia.

“Making money in the domestic jangmadang [private markets] is tight,” said one defector with a relative who worked as a trade company official abroad. “The donju mostly made their fortunes in foreign currency from businesses abroad.”

Many of those who are sent to work across the border for two or three years come back with a lot of cash in hand, he said. “I heard that even after you pay the government its required sum, you still have half left over.”

The most successful, this defector added, are able to build close ties with local business interests and further enlarge their businesses. “It is a well-known secret among border traders that some entrepreneurs eat $1,000 meals at restaurants in China or Russia with local associates.”

Another defector familiar with cross-border business practices attested that duping the government is quite a commonplace practice for personal enrichment. 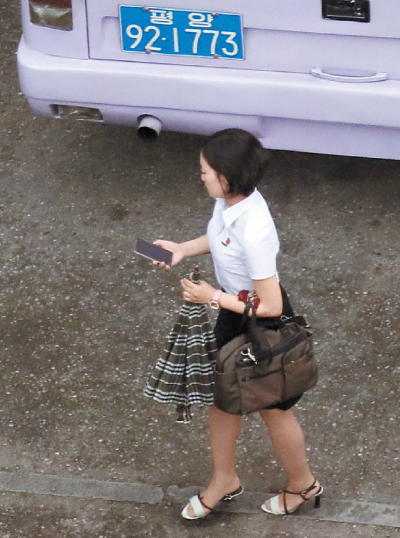 A woman walks in Pyongyang while looking at her mobile phone on July 5. [YONHAP]

“If a manager takes around 100 laborers across the border and pays each worker $1,000 every month, he will make $1.2 million by the year’s end,” he said. “Then when the manager returns home, he can easily underreport labor costs and take away around $300,000 to $400,000 in personal profit that year.”

Recently, businesses in North Korea have taken the initiative to conduct trade across the border without going through official trade offices. Donju provide initial capital for setting up business, and act as private financiers.

The government turns a blind eye to the donju’s numerous enterprises, taking a cue from a speech made by Kim Jong-un in 2015, in which he ordered officials to increase investment while “not asking where the foreign currency comes from.”

In a sense, the donju are performing functions traditionally provided by the state, which for its part has been gradually loosening its iron grip over the planned economy, with such measures like giving state-run enterprises freer rein over production.

In 2014, the government amended its “socialist responsible management system to enterprises,” by which it relegated the management of production, employment and quality control, as well as the development of new products, to the managers of state-run enterprises.

The measure was widely regarded as a step beyond the regime’s earlier efforts to inch closer to capitalism in late June 2002 - known as the July 1 Measure - which rebalanced domestic prices and renominated the currency to flush out cash hoarded in peoples’ homes.

That was largely a failure, however, due to the ambiguity of top officials in the Worker’s Party - North Korea’s ruling establishment - towards capitalist enterprise. The director of planning and finance department, who was responsible for the failed renomination, was ultimately executed.

Services that used to be provided by the state at no charge, like education and health care, have been scaled back, and people now have to pay out of their pocket for better health care.

Another example is the use of the state’s few highways, which used to be free provided one had an automobile, itself a luxury in the North. Though it is virtually impossible to know exactly how many vehicles are in use in North Korea today, virtually all sources agree that traffic in Pyongyang has been heavier than ever before.

On the border with China, trucks carrying merchandise in and out of the country now pile up at the border, adding pressure on the country’s dilapidated roads.

The government now charges a toll of 2 euros ($2.30) for every 100 kilometers (62 miles) traveled on its roads. A drive from Pyongyang to Wonsan, a major coastal city on the country’s eastern shores, costs 8 euros.

Travelers wishing to use these roads must buy a toll card for 2.5 euros and top it up with the necessary sum to pay these fees. This prepaid system, according to a defector, is meant to prevent toll booth workers from skimming off fees from drivers.

Another indication of the North Korean government’s newfound focus on markets is its policy towards cellphone subscriptions. According to the INSS, North Korea is believed to have a consumer base of over 5.8 million cellphone users, which is growing every year.

“In principle, one person can only own one cellphone,” said one high-level defector. “But an increasing number of people own multiple phones by registering their second or third phones in other people’s names.”

To buy a phone and pay the monthly bill requires U.S. dollars.

“Used cellphones cost around $100, while new ones cost on average around $300 but can go as high as $1,000,” said Lee Ki-dong, the vice-president of INSS. “By such estimates, over $1.74 billion is believed to have been spent to open these phone accounts.”

Lee believes the government is undertaking a policy of “dollarization,” encouraging the use of the foreign currency in order to flush out dollars hoarded by average people, thus encouraging market development.

“The North Korean regime is reducing its own burden of supporting the people,” said Lim Soo-ho, senior research fellow at the INSS. “This is freeing room for the government to focus its investments in strategic industries.”