Look out golf fans, the LPGA is back in town

Look out golf fans, the LPGA is back in town 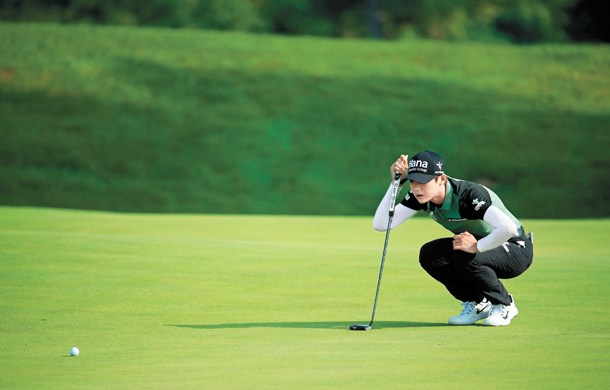 Park Sung-hyun reads the line of her putt during the final round of the Indy Women in Tech Championship Driven by Group 1001 at the Brickyard Crossing Golf Club in Indianapolis, Indiana, on Aug. 19. [GETTY IMAGES/YONHAP]

Local golf fans will once again get front row seats as their favorite players hit the fairway here in Korea with the 2018 LPGA KEB Hana Bank Championship kicking off in Incheon today.

The tournament, returning for its 17th year, will feature 78 players - 59 from the LPGA tour, 12 from the KLPGA and seven sponsor-exempted competitors - competing for the $2 million purse. 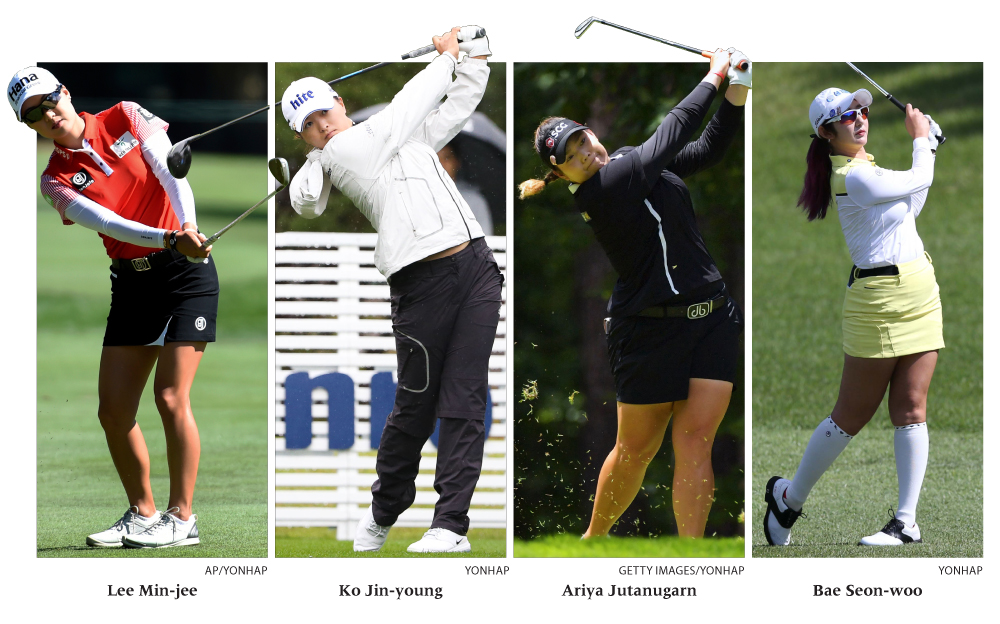 The tournament comes at an exciting time for women’s golf in Korea. Just last week, the LPGA’s UL International Crown was held in Korea for the first time and the Hite Jinro Championship, one of the biggest tournaments on the KLPGA tour, was held in Yeoju, Gyeonggi. The two popular events set the stage for a competitive KEB Hana Bank Championship as about half of the players in the field competed here last week.

Park Sung-hyun hopes to continue the success of Team Korea at the UL International Crown by winning her fourth individual title of the season at the championship this week. The current world No. 1 has gone from strength to strength this season, winning three tournaments and holding the top spot in the Rolex Women’s World Ranking for eight consecutive weeks.

Entering the tournament with a team victory last week, Park is eager to redeem herself from a runner-up finish last year and a singles match lost against Thailand’s Ariya Jutanugarn on Sunday.

“I felt great with my shots last week and hopefully I’ll be able to keep it up this week,” Park said at a press conference on Monday. “In the past, I haven’t done as well at par-5s as I would have liked to. I am going to adjust my approach and try to go and make more birdies and eagles.”

Park and Jutanugarn have emerged as rivals this season as the only players to have each won three tournaments on the LPGA Tour. Although Park holds a slim 0.26 points advantage over world No. 2 Jutanugarn, when it comes to the Player of the Year award, Jutanugarn is well ahead of Park.

Depending on the results from the remaining tournaments in Asia this season, Jutanugarn could potentially reach the top spot in the world ranking. In addition to the two players’ success this season, they are two of the longest hitters on the Tour.

Park, Jutanugarn and Brooke Henderson of Canada are expected to draw the biggest crowds during the first round as they are paired in the same group. They will be the last group starting on the first hole at 10:40 a.m. today.

Including the top two players in the world ranking, the field this week will include a total of five of the top-10 female golfers. Lee Min-jee of Australia is one of them as she enters the tournament ranking seventh in the world ranking. Although Lee hasn’t received much attention this season compared to other top-ranked players, she had been consistent, having already picked up a win in May at the LPGA Volvik Championship. Lee has 11 top-10 finishes this season and is ranked second in the Race to CME Globe, behind Jutanugarn. Along with Park, KEB Hana Bank is Lee’s main sponsor.

Lee will start her first round on the first hole at 10:18 a.m. along with Nasa Hataoka of Japan and Kim Sei-young.

Ko Jin-young also returns to the tournament this year to defend her title. Last year, Ko won the tournament as a non-LPGA Tour member, the fifth Korean golfer to do so, by defeating Park by two shots. Following her victory in 2017, Ko made her LPGA Tour debut this year without having to go through the qualifying school and is currently leading the Tour’s rookie of the year race.

Ko got off to a great start by winning the ISPS Handa Australian Women’s Open in February. Although she has only won one tournament so far this season, Ko has shown consistency, making 10 top-10 finishes and moving up to No. 12 in the world ranking. Originally, Ko was selected as one of four golfers to represent Team Korea at the UL International Crown, but she turned it down to compete at the KLPGA’s Hite Jinro Championship as it is her sponsor event.

“You have to create as many birdie opportunities on par-5s as you can and iron shots will be especially important,” Ko said during a press conference on Monday.

Although Ko has a dominant lead in the LPGA’s rookie race, holding an almost 300-point lead ahead of England’s Georgia Hall, she’ll need a strong finish at the tournament as well as in the remaining events in Asia to secure her rookie title, as Hall is also seeking a shot at the rookie title in the second half of the season.

Hall may not have as impressive a career as Ko, but her major victory in August - the Ricoh Women’s British Open - allowed her world ranking to move up significantly, from 39th to 10th, and she is now ranked sixth in the world ranking, six spots above Ko.

Ko will play her first round, starting from the first hole, along with 2015 champion Lexi Thompson of the United States and 2016 champion Carlota Ciganda of Spain at 10:29 a.m.

Over the last 17 years, a total of five KLPGA Tour players have earned their full-time LPGA Tour status card by winning the tournament. KLPGA players tend to have strong finishes at this specific LPGA Tour event as it is played at home. This year, Bae Seon-woo hopes to follow in their footsteps and earn her spot on the Tour.

“This will be my fourth year at this tournament and I haven’t done well here so far,” Bae said at a pretournament press conference on Monday. “But since I won last week and I am on a roll, I should have a pretty good tournament this year.”

Although Bae hasn’t seen much success at the tournament in the past three years, this year, she feels better than ever as her win at the Hite Jinro Championship on Sunday has boosted her confidence. The win on Sunday allowed Bae to enter the tournament as one of the highest-ranked KLPGA players in the world, at No. 38.

“For all golfers, it’s the ultimate dream to play on the U.S. tour,” Bae said. “If I win this week, I’ll talk to [Ko] about her experience.”

Bae will start her first round on the 10th hole at 10:18 a.m. along with KLPGA player Park Chae-yoon and Sarah Jane Smith of Australia.

The first round of the KEB Hana Bank Championship will start today at 8:28 a.m. at the Sky 72 Golf Club Ocean Course in Incheon.