Finding a vision late in life with smoke and flame: Jean Boghossian says that elements that destroy can also create

Finding a vision late in life with smoke and flame: Jean Boghossian says that elements that destroy can also create 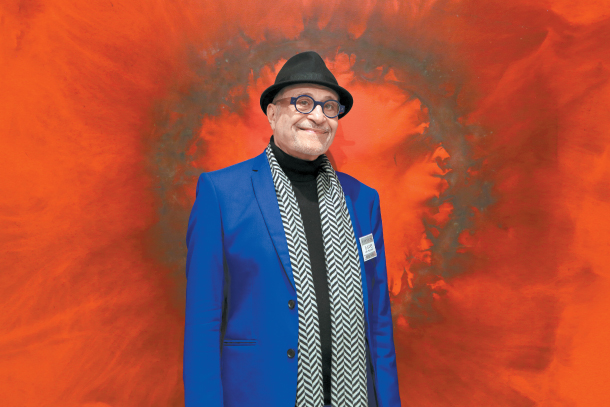 Artist Jean Boghossian stands in front of his acrylic and smoke painting “Untitled” during the opening of his solo show “Flamme Interieure” at the new Museum Ground in Yongin, Gyeonggi. [MUSEUM GROUND]

Although the Brussels-based Lebanese artist of Armenian descent is better known in Korea as president of the Boghossian Foundation for charity and art patronage, he is well-known as an artist in Europe and the Middle East and was exhibited in the Armenian Pavilion at the prestigious 2017 Venice Biennale.

The 68-year-old artist began his formal training in painting and sculpture relatively late. He was in his late 30s and had been working in the family business of dealing and designing jewelry. “For the last thirty years, I was going through the history of art not only theoretically but also physically; I was working on Impressionism, Surrealism and Cubism until I reached abstraction,” he said in an interview with the Korea JoongAng Daily (KJD) in Seoul on Sunday.

In 2010, Boghossian began to use techniques of fire torching and perforation to create his unique abstract paintings. “For the last eight years, my work has been defined by flame, fire and smoke,” he said. He also burnt books, wood and polystyrene panels, using various instruments including blowtorches, to create sculptures.

His solo show “Flamme Interieure [Inner Flame],” which runs through March 24, 2019 at Museum Ground, features 46 of such works. Below are excerpts of the KJD’s interview with him.

Left: Boghossian’s smoke paintings hang in a gallery of Museum Ground. Right: One of his sculptures made of a book laser-cut and burnt is also in the exhibit. [MUSEUM GROUND]

Q. Would you explain your works using fire?

A. My work is regulating chaos. Fire is violent and destructive but my work is constructive and positive. In my works, fire is integrated with pigments. Pigments burn but they keep their colors.

Fire is my partner. He chose me to reveal what he can produce. [The artist spoke as if fire were a person.] I try to guide him to what I want. Sometimes he follows but sometimes he resists and sometimes he burns me. (laugh) It’s a kind of dance - like dancing a tango. So we, fire and me, dance and we get the results that you see.

When did you hit upon the idea of using fire?

When I was a young guy, I made jewelry [for the family business] and used blowtorches to melt the metal. But I forgot about it when I started art many years later.

After experimenting with the history of art, I jumped into abstraction, which became a freedom for me. When I got free, I felt so happy. So I don’t want to go back to representation. [With abstract art] I can express much more and suggest much more. Contemporary art is suggesting - not telling. The viewers listen to what the works suggest and they might understand something else. That’s the beauty of abstract art. The viewers become part of the production.

You are also holding a solo show in a Beirut building that was partly burnt during the civil war. You are from countries - Armenia, Syria and Lebanon - that suffered wars just like Korea. Aren’t you concerned that people could associate fire used in your works with wars and other violent things?

I’m more concerned about how to show that fire can produce peace, like words. Words can produce a war but words can also produce peace. Even the same words can produce love and hate, depending on how they are said. Everything can be used differently; this is my message. Knowing this, humankind can surpass stupid things in order to have a better vision. It’s very important that I’m showing something positive with something that could be negative.

For me, art is the solution to the world, although some say you cannot change the world with art. I tell them art is the only thing left, as religion does not live and politics does not live. We have to believe in art.

The world is crazy and art can help and bring them together.

Your works seem to share some East Asian aesthetics and philosophy.

I’m inspired by East Asia and I traveled to East Asia a lot. I started my business in Hong Kong, Thailand, China, Japan and Korea when I was a jeweller before. I always loved poetic mountains in East Asia and there is a painting of them I’ve done with flame and smoke in my solo show. [The exhibition include black-and-white, smokey-looking paintings reminiscent of ink paintings.] And I was fascinated by East Asian calligraphy. My use of fire also has something to do with calligraphy. I’m glad that you realized that, because I’ve studied East Asian culture including its religions such as Taoism, Confucianism and Buddhism. I believe I’m a citizen of the world and, being a citizen of the world, you have to know what is happening in the world and also have to contribute to it.