Lee Jini proves she’s truly her mother’s daughter: But the model and actor is showing she can make her own career

Lee Jini proves she’s truly her mother’s daughter: But the model and actor is showing she can make her own career 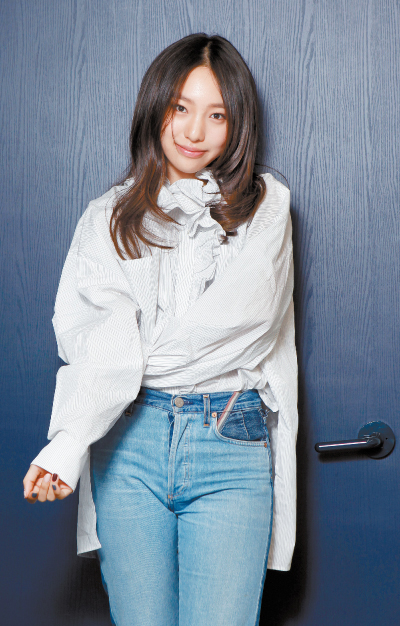 She may just have turned 19 this year, but model and actor Lee Jini already has a wealth of experience under her belt. She made her debut in 2013 at the age of 14, and since then Lee has been making her name in the entertainment scene with talents that go beyond just fashion. She’s branched out into cosmetics and television.

Currently, Lee is an emcee for JTBC4’s beauty variety show “My Mad Beauty 2” along with celebrity Park Na-rae and singersKim Hyo-yeon of Girls’ Generation and Lee Mi-joo of Lovelyz.

The female panelists talk about the latest cosmetic trends in Korea and give viewers tips on finding the best styles. With every fashion show and television program she pulls off, she has the best teacher waiting at home to give her tips on how to do better - her mother, actor Hwang Shin-hye.

When Lee started to work as a television entertainer, people were skeptical as to whether she actually had what it takes make it to the scene. Some believed she would stay in the shadow of her mother, who was one of the leading stars of the 1990s. But Lee is more than capable of doing everything for herself, it turns out.

“When I was on my first catwalk [in 2013], all I could do was tell myself, ‘Don’t fall down, don’t fall down,’” said Lee. “I looked up ways of relaxing when you’re nervous on the internet, and I saw that it helps if you draw circles on your palm with your fingers. I was doing that the whole time I was waiting for my turn. When I was done, I was so excited that I pulled it off. Fortunately, I’ve never fell down in any of my other shows.”

Lee sat down for an interview with the Korea JoongAng Daily to talk about her blooming career and how she got to understand her celebrity mother better by following a similar path.

Q. How did your modeling career begin?

A. To be honest, I had no idea I would become a model or that I’d want to be one. But I had a friend who wanted to become a model, and she convinced me to go to a modelling academy with her. That’s where I realized for the first time that this profession may actually be very fun and interesting to pursue. The funny thing is, my friend dropped out the very next day [laughs]. We still keep in touch, and I bought her a nice meal after I made it to the big stage.

Your mother is a big-time star. What did she say when you first told her that you were going to take modeling seriously?

At first, she told me that I shouldn’t start if I wasn’t going to take it seriously. She told me that if I was going to make such a big choice, that I would have to take big responsibilities that came with it. But after that, she was very supportive, and she still monitors everything and every show that I do. I go home and she tells me things like, “You look better with your hair down than up,” “You need to talk slower,” “You need to work on your pronunciation” and “Sit with your back straight and don’t cross your legs.” She’s the scariest teacher that I have.

Does she give you good comments as well?

If she tells me that I looked pretty, then that’s the best compliment I can get [laughs]. But if I go to her for tips on how to do better, then she always tries to help me as much as she can.

What’s one of the hardest things about being a model?

The fashion industry moves a season faster than the rest of the people. So in summer, designers already have the fall/winter season line out, and in the winter, they design clothes for the summer. The problem with this is that whenever we’re taking a photograph, the weather’s always against us.

I remember a winter when I was 16, and a cold wave watch was issued. I was shooting a photo for a sportswear brand’s summer collection. They had me wearing short tennis skirts with cropped T-shirts or short pants with all my hair pushed back. I even had to lie down on the frozen ground. I felt sick that night and couldn’t get up from my bed until the next day. It’s hotter in the summer wearing coats and fur accessories, but I can cope with it. But I can’t deal with the cold weather.

You’re currently on the JTBC beauty show “My Mad Beauty 2.” What are some makeup and style trends these days?

Well, this season’s color is brown, as is the case with most autumns. But this year, the eye shadows have a velvety texture to them, and it looks best together with sparkly pearls. The hottest trend with styling is with leopard patterns. Whether it’s a leopard shirt, skirt or accessories, everyone’s getting themselves an item with the pattern on it. An interesting thing about a fad is that it actually makes something look pretty, even though you didn’t like it in the past. I couldn’t understand leopard patterns, but yesterday I got my nails done in them.

Now that you’re on TV more, are there some things that you’ve come to understand about your mother?

Definitely. I talk about a lot of things with her, because there are things that we see in common. When I was younger, I couldn’t understand why she couldn’t spend time with me. But it turns out, she was doing the best she could. Now, I think it’s amazing that she’s done what she has for such a long time and that she made it to where she stands. I think I’m starting to actually understand my mother’s past.

What goals do you have for the future?

I hope I get to try out more roles on television. Somehow, I’ve only done rich characters with different personalities - so, a stupid rich girl, a nice rich girl or an immature rich girl. In the future, I’d like to try a character that’s more down to earth and outgoing. Maybe a university student from a campus romantic comedy. Whatever role it is, I’m ready to show good chemistry with my partner.