The death of daigou

The death of daigou

PARK HYUN-YOUNG
The author is the head of the global economy team of the JoongAng Ilbo. 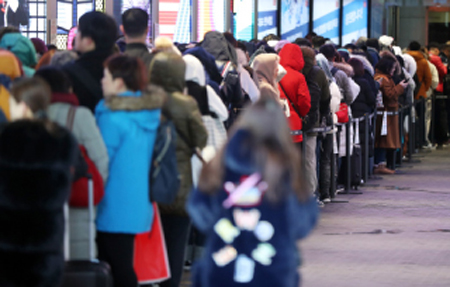 Chinese shoppers are waiting in line to buy luxury brands at a duty-free shop in downtown Seoul on a freezing day last December. [YONHAP]

Last week, videos and photos of Chinese customs officers checking overseas shopping spread on Chinese portal site Baidu and messaging app WeChat. Chinese people arriving at Shanghai Pudong Airport waited in a long line to get customs clearance. Each bag was opened and checked, and inexorably high taxes were imposed on luxury goods over the duty exemption limit. One user shared a photo of a receipt paying 17,100 yuan ($2,472) for cosmetics and lipsticks going over the exemption limit.

Most of them were passengers arriving from trips to Korea and Japan. More than 100 people were caught per airplane. There was speculation and rumors that the Chinese authorities were sending a message to Chinese travelers during the country’s National Day golden week from Oct. 1 to 7 to refrain from shopping sprees abroad.

The Chinese national radio station also reported on Beijing’s crackdown. Citing a JP Morgan analyst, Bloomberg and other foreign media reported that daigou — Chinese people’s buying and selling of international products on behalf of customers in mainland China — who frequently travel to Korea were the main targets. It reminded me of the harassment of Korean retailers and distributors in the aftermath of the Thaad antimissile system deployment in Korea over the last two years.

Chinese people buy luxury goods abroad because they are 30 to 40 percent cheaper than buying them in China. But if Chinese customs strictly apply the duty free limit, the benefit will be diminished. Chinese people would naturally shop less abroad. The duty free limit for Chinese nationals is 5,000 yuan. Because the limit has not been enforced strictly, daigou merchants brought back luxury goods mostly from Korea and Japan.

As a result, Korea has been a luxury shopping destination for Chinese people. Korean branches of global luxury brands such as Louis Vuitton, Chanel and Gucci as well as Korea’s local brands made lots of money thanks to Chinese visitors. Sales of luxury goods purchased in Korea and brought to China make up 1.5 percent of the international luxury goods market.

China’s crackdown on overseas shopping can be interpreted as a way to reduce overseas spending to boost its domestic consumption as China is struggling in the trade war with America. If China fully launches the strategy to boost domestic consumption, Korea will suffer the most. The case of AmorePacific is a good indicator. It shows how tourism and retail policies are overly reliant on China. Korea should not be the most vulnerable partner that China can bully.