Hanwha gives back for 66th anniversary

Hanwha gives back for 66th anniversary 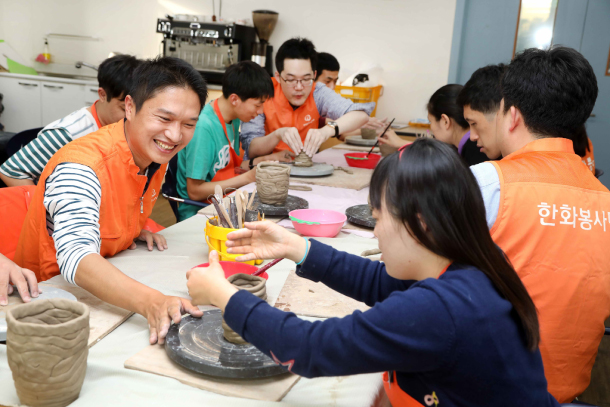 Hanwha Group is celebrating its 66th anniversary by holding a series of social contribution projects with its 22 affiliates, the company said Wednesday.

“We have to establish a culture of growing together, not alone,” Hanwha Group Chairman Kim Seung-youn said Tuesday in his congratulatory remark for the anniversary.

Hanwha’s anniversary was on Tuesday, but the company decided to celebrate its anniversary for all of October via social contribution projects carried out by its 3,400 employees. Hanwha has been celebrating its anniversary this way every year since 2007.

The projects include repairing old houses, giving educational support by mentoring and cleaning the streets. The company also said it will install solar energy streetlights in less developed areas.

About 700 Hanwha employees stayed behind until midnight to clean up garbage at the Seoul International Fireworks Festival, organized by the company, in Yeouido, western Seoul, last Saturday.

On Monday, the Seorak office of Hanwha Hotels & Resorts held an event to offer free meals to about 80 senior citizens in the region while the Yongin office visited the homes of senior citizens living alone to deliver food to them directly. Employees of Hanwha General Insurance and Hanwha Investment & Securities also donated blood on Wednesday.

“We believe that these annual social contribution events have put Hanwha Group to where it is now,” a spokesperson from Hanwha said. “We will continue to come up with diverse projects [every year] so that the public can start looking forward to the month of October.”