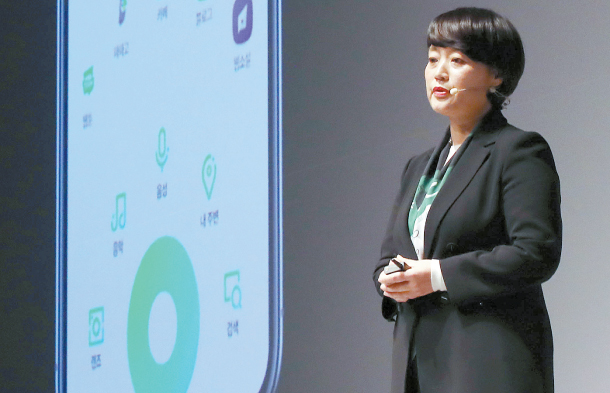 Naver CEO Han Seong-sook on Wednesday announces an overhaul of the design of its mobile app that leaves nothing but a search bar on its homepage at a Naver Connect event in Gangnam District, southern Seoul. [YONHAP]

Naver announced a major face-lift to its mobile app Wednesday, leaving nothing but a search bar on the homepage.

Gone is the content - news stories and trending keywords - that have been exposed as being manipulated in the past.

Since the launch of a mobile version of Korea’s No.1 internet portal in 2009, the homepage has been a busy combination of a search bar, curated news articles and a rolling bar that shows trending search keywords. It was a miniature version of the portal’s PC homepage.

“What sparked our consideration was the fact that seven news articles and 20 trending keywords were dispersing the concentration of our 30 million users,” said Naver CEO Han Seong-sook on Wednesday at a Naver Connect event in Gangnam District, southern Seoul, where the company shared business plans for next year.

The new homepage has a Naver search bar at the center, similar to Google’s. Below that are two small banners reserved for advertisements and weather information.

“Internal research shows that 60 percent of Naver users visit our page to search,” said Kim Eon, who is in charge of design at the company. “The search bar’s size was relatively small considering the fact that 60 percent [of users] come to use that function. And I’m sure a lot of you have experienced coming to Naver to look something up and finding yourself carried away by news articles or trending keywords. We thought it was important to rearrange it in a way that best fits our main function.”

In fact, the news and keywords on the mobile homepage have been in the center of controversy this year. A power blogger who goes by the alias Druking and two associates were found to have used illegal software to manipulate online opinion on portals’ news sections and get politicians they favored on the trending keyword list.

Naver faced criticism that its carelessness allowed manipulation of its content.

Han said internal discussions on the change started in February, denying that the Druking case was a main motivation.

“The company has been seeing a slower inflow of users in their teens and 20s, and our homepage seemed to be giving the strong impression that the site was for an older user base in their 30s and 40s,” she said.

After simplifying the homepage, Naver made multiple secondary pages that can be accessed by swiping right or left. Swiping right shows news articles and trending keywords. This section is called “East land” and will mainly have text content.

Another major feature introduced Wednesday was the Green Dot. A green button will be located on the mobile homepage. With a click, the Greet Dot opens a window to allow a search by voice, QR code and other methods.

Naver’s new mobile homepage will be released in a beta version downloadable from Google Play today. An iPhone version will come later.