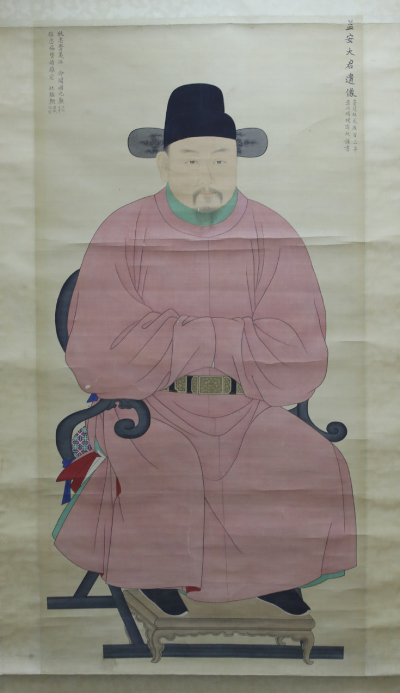 Recovered - A lost portrait of Grand Prince Ikan (1360-1404) has finally been returned to the Yi clan of Jeonju in North Jeolla on Wednesday at a ceremony organized by the Cultural Heritage Administration inside the National Palace Museum of Korea in central Seoul. The Grand Prince Ikan is the third son of Taejo Yi Seong-gye (1335-1408), the founder and first king of the Joseon Dynasty (1392-1910).

The portrait was stolen from one of the Yi clan families in 2000 and smuggled to Japan by a broker and then brought back into Korea. The Cultural Heritage Administration’s investigation team managed to catch the thief and the broker in 2001, but were unable to find the portrait until recently. The broker had been hiding the portrait, according to the administration.

According to Jung Jin-hee, an adviser to the Cultural Heritage Administration, the portrait was painted in 1993, presumably copying an original painting by royal court painter Jang Deuk-man.

“The portrait embodies typical portrait painting styles of the Joseon Dynasty’s noble family,” said Jung, “and through this painting we can compare the features with the portraits of his father Taejo and infer the features of his brothers Jeongjong and Taejong. Because of its rarity, we regard the existence of it as very valuable.”