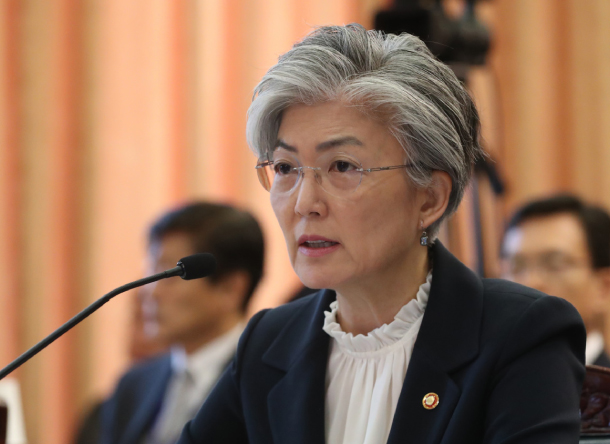 Foreign Minister Kang Kyung-wha speaks during a parliamentary audit at the government complex in central Seoul on Wednesday.[YONHAP]

Foreign Minister Kang Kyung-wha said that the government is “reviewing with relevant agencies” whether to lift South Korea’s May 24 sanctions on the North during a parliamentary audit on Wednesday.

During an annual audit of the Ministry of Foreign Affairs, Kang told a lawmaker from the ruling Democratic Party that South Korean tourism to the North was being blocked by the South’s May 24 measures rather than UN sanctions.

Kang later clarified that “the relevant agencies are always reviewing this issue,” adding that, “the discussion is not happening at the government level.”

The conservative Lee Myung-bak administration implemented the so-called May 24 measures in 2010. The package of sanctions essentially prohibited South Korean individuals and companies from engaging in economic and cultural exchanges with the North, blocked any new investment in the North and banned North Korean ships from the South’s waters.

The measures were in response to the sinking of the South Korean Cheonan naval vessel on March 26 that year, which killed 46 South Korean sailors. South Korean authorities said North Korea torpedoed the Cheonan, while Pyongyang denied responsibility.

An exception to the ban on inter-Korean trade was the Kaesong Industrial Complex, the last vestige of inter-Korean economic cooperation. However, that too was closed down in February 2016 during the previous Park Geun-hye administration in response to the North’s fourth nuclear test and missile provocations. Tours to the Mount Kumgang resort came to an end in 2008 after a North Korean soldier fatally shot a South Korean tourist. Kang confirmed once more that Kaesong, until it had been shut down, hadn’t been a sanctions target.

Nonetheless, many of the May 24 measures overlap with existing UN Security Council sanctions aimed at curbing the North’s nuclear and missile programs. Kang signaled that the lifting of the May 24 measures will largely be symbolic action for now because of existing UN Security Council sanctions on the North that will continue to block trade and investment in the country.

“A considerable portion of the May 24 measures overlap with the UN sanctions,” Kang said. “Even if they are lifted, it will not lead to substantial action.”

She added, “The lifting [of the measure] is a situation that has to be reviewed comprehensively, taking into consideration inter-Korean relations. In a situation where there is ongoing dialogue on denuclearization and the advancing of inter-Korean relations, there is need for flexibility in such a review, without infringing upon UN Security Council resolutions and sanctions on the North.”

“North Korea has been endlessly asking for the lifting of the May 24 measures, and doing just that is giving them a present,” said Rep. Chung Jin-suk of the Liberty Korea Party. “The government will have to ask for the understanding of the families of the Cheonan victims.”

A Foreign Ministry spokesman said in a statement later that day that, “the issue of lifting the May 24 measures is a matter that has to be reviewed across the board, taking into consideration inter-Korean relations and the sanctions situation.” The statement added that it will be in keeping with the framework of the UN Security Council resolutions.