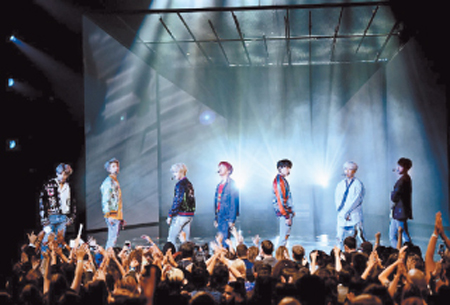 Global superstars BTS have made it onto the 2018 “Next Generation Leaders” list from Time Magazine.

On Thursday, Time Magazine posted an article titled “How BTS Is Taking Over the World” along with a video containing excerpts of their interview. In the video, the group’s leader, Kim Nam-joon — also known as RM — talks about how proud the group is of their country.

“As a Korean, we love our country and we’re proud of our country so much. And it’s just an honor to be called an ambassador of Korean K-pop,” he said in English in the video.

Suga then added in Korean, “Those from my parents’ or my grandparents’ generation, even more so than those from our generation, are very proud of us. They love seeing us on the news. And so for me, it’s enjoyable to see my father proud of things like that.”

Time annually chooses a variety of young people in different industries to highlight their achievements in changing the world.

Along with BTS’s article and video, Time Magazine also released an image of the cover of the international edition of the magazine featuring the septet. The magazine is set to be released on Oct. 22.

BTS is currently in Europe for its “Love Yourself” world tour. It has recently finished off a two-day concert series in London’s O2 Arena, from Tuesday to Wednesday. All 40,000 tickets sold out within minutes in June.

The Blue House confirmed on Thursday that BTS will visit Paris on Oct. 14 to perform at the “Korea-France Friendship Concert,” which will be attended by President Moon Jae-in.