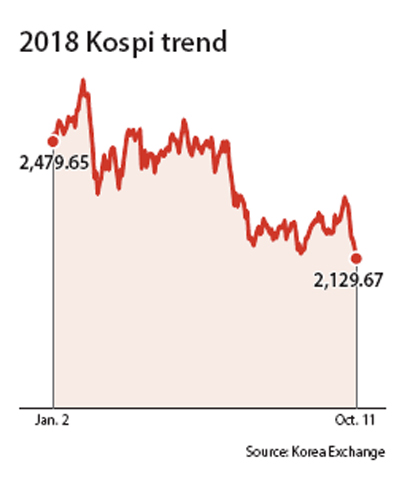 Korean equity and currency markets nosedived Thursday with the main Kospi bourse seeing its largest drop in seven years, taking a negative cue from Wall Street the day before.

The Korean won also hit this year’s lowest level at 1,144.4 won against the U.S. dollar, up 10 won or 0.9 percent from the previous trading session.

The benchmark Kospi and the junior Kosdaq have been on losing streaks for eight consecutive trading days with uncertainties outside of Korea dampening investor sentiment.

“Different factors play into the drop,” said You Seung-min, an analyst at Samsung Securities. “First, it is the rising U.S. Treasury bonds’ yield rates and renewed possibility of inflation affected by increasing oil prices. Then there’s trade tension between the United States and China and worries over weak performances of tech stocks.”

Leading tech shares in the United States such as Microsoft and Amazon led the Wednesday rout, which also dealt blows to local IT leaders Samsung Electronics and SK Hynix.

Analysts have warned that the two companies’ performances are going to suffer due to the oversupply of semiconductors starting in the fourth quarter.

Lee Kyung-min, an analyst at Daishin Securities, pointed to investors’ doubts over economic fundamentals in the United States.

His view is in line with the International Monetary Fund (IMF)’s downbeat assessment for the global and Korean economies this year through next year.

Its latest report painted grimmer prospects for the overall global economy this year and the next, trimming its predictions by 0.2 percentage points each to 3.7 percent for both years.

The agency also lowered its outlook for Korea’s economic growth this year and next, citing trade tensions between the world’s two largest economies, slower momentum in global trade and financial turbulence in emerging countries.

Meanwhile, the dollar is expected to continue strengthening against the won because of investors looking for safer assets in times of uncertainty.

Depreciation of the Korean won has led more foreigners to try profiting from the strengthening dollar. In the last eight trading days, foreign investors net sold nearly 2.3 trillion won ($2 billion) worth of shares on the Kospi.