Naver is ready to break free from the internet

Naver is ready to break free from the internet

Naver is ready to shake off the shackles of the virtual realm and make its impact on the real world, with the portal giant banking on location-based technology as its best bet at integrating itself into its users’ everyday offline lives.

“Naver’s core strategy in tech development is ‘Ambient Intelligence’ - which aims to understand circumstances and automatically suggest information or conduct an action according to it,” said Song Chang-hyun, Naver’s chief technology officer, during a key note speech at the event.

Song added that technology is changing in such a way that systems understand the context and situation a user is in, discover their needs first and conduct the right action, instead of simply responding to specific orders.

“The most important context [to understanding users’ needs] in the physical world is location,” he said.

Naver already has detailed maps and location data of Korean users accumulated through its Naver Map service. In Korea, the mobile app is one of the top location services on Google’s Android store as of September, according to Wise App. 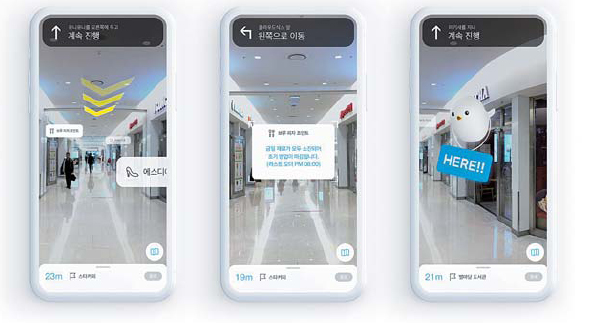 To encourage the development of mobility technology by third-party engineers, Song announced that the company would create open-source development tools equipped with Naver’s location data and technology.

The first platform announced to go open-source is “Enterprise API” (application programming interface), which will widen the range of location data accessible to external companies. Additionally, the companies will be able to embed Naver’s map and location services on their own websites or online services indefinitely, after paying a one-off setup fee. In the past, there was a daily usage limit.

“Map platforms require not only cutting-edge technology [to develop in the first place], but also large capital for maintenance [for regular updates], so it’s not easy to realize for smaller ICT firms,” the portal giant said in a statement.

“Now that the platform is open, we hope to see more innovative business models in mobility.”

Naver is also sharing a mapping platform called xDM, or eXtended Definition & Dimension Map. Mapping is the creation of maps by perceiving geographical features and serves as the basis of every location-related services and products including autonomous cars and robots.

The xDM API comes in two types: wayfinding, for navigation services, and autonomous mobility, for self-driving machines. Both APIs can work with Naver’s robots, revealed at last year’s Deview event, that film physical locations to turn them into digital data.

One example of Naver’s location tech output is an indoor navigation service under development with Incheon International Airport. The service can show directions to gates through augmented reality using images from a smartphone camera.

Song said the robots will be introduced at the Consumer Electronics Show next year. It will be Naver’s first time attending the annual event.