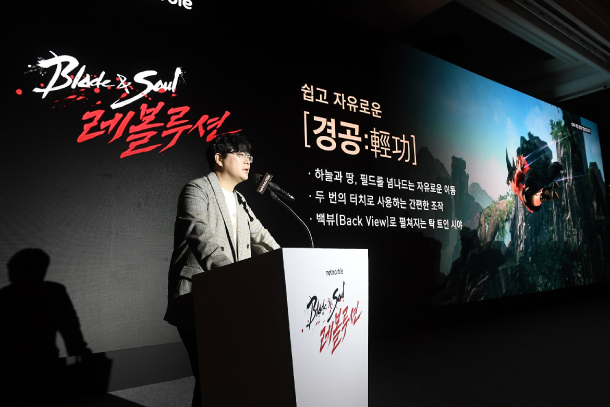 Following the success of its previous mobile smash hit, “Lineage 2: Revolution,” Netmarble presented the fantasy martial-arts mobile game “Blade & Soul Revolution” in hopes that it would give another boost to the gaming company.

During a press conference, Netmarble CEO Kwon Young-sik vowed to “revolutionize” the mobile gaming sector as it had done with its previous mobile game back in 2016.

“[The word in the title] ‘Revolution’ signifies our determination to outdo our previous product,” said Kwon. “Netmarble aims to bring another revolution through Blade & Soul Revolution.”

The second “Revolution” title game marks the two years since Netmarble launched a major-title mobile game. Although “Lineage 2: Revolution” is still at third place in terms of sales in the Google Play store, Netmarble has been pressured by market competitors, Nexon and NCSoft.

The massive multiplayer online role-playing game (Mmorpg) is based on the PC game “Blade & Soul” developed by industry titan NCSoft.

Netmarble pays royalties to use NCSoft’s original game’s intellectual property, and the recognition of the first game could help Netmarble reach out to gamers in the wider market.

First featured at gaming conference G-Star in November last year, the community-focused game will also introduce a combat system that allows up to 1,000 gamers to play at the same time. The open-field system will allow two groups of 500 players to fight one another.