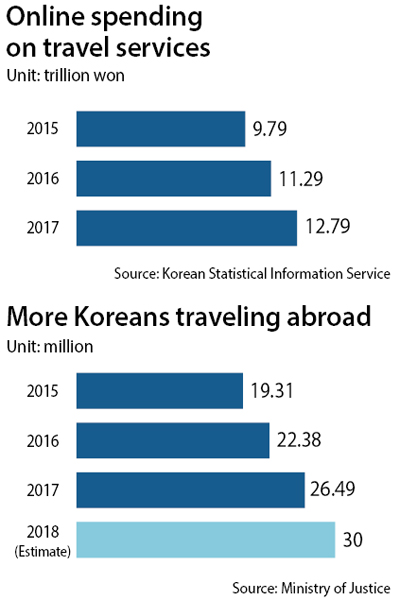 Two out of three Koreans are expected to travel abroad by the end of this year, but domestic travel agencies are on the decline as their outdated business model fails to compete with global travel platforms.

Four domestic travel agencies including Top Travel Service, once Korea’s most popular flight booking site, closed down this year due to financial challenges.

“Things are not looking good for the industry and there are always rumors of which travel agencies will shut down next,” said one travel agent who requested anonymity.

The closures appear to contradict statistics, which reveal that Koreans today are travelling more than ever.

Last year, Koreans spent 12.79 trillion won ($11.17 billion) online on travel-related services such as flight tickets and hotel rooms, according to the Korean Statistical Information Service. The number of Koreans traveling abroad has consistently risen over the past four years, and the Justice Ministry expects 30 million Koreans to travel abroad this year, more than half of the population.

The travel agencies that recently closed down all followed a similar business model. They would profit from buying flight tickets in bulk and selling them to customers, or receive commissions from the hotels where their customers stayed.

“For over a decade, Top Travel Service pursued the strategy of earning profits from reselling cheap flight tickets to consumers or receiving commissions from airlines,” said another travel agent who requested anonymity.

From the 2010s, however, the popularity of foreign travel platforms like Expedia and Priceline threatened to change the rules of the game in Korea. These platforms attracted customers by allowing them to compare thousands of cheap flights, accommodation, rental cars and local activities available in their desired destination, whereas traditional agencies had only provided a limited selection.

Instead of jumping on the online platform bandwagon, many domestic travel agencies shifted their focus to expanding services targeting Chinese tourists in the 2010s. This strategy included forming partnerships with duty-free stores to get commission for bringing shoppers from group tours, or building hotels specifically geared toward Chinese guests.

A series of unforeseen events like the MERS epidemic, the installation of the Thaad anti-missile system and Beijing’s subsequent ban on Chinese people going on group tours to Korea dealt a huge blow to the inflow of Chinese tourists. Unable to cope with the sudden loss of their main clientele, the travel agencies that had hedged all their bets on Chinese tourists were forced to shoulder huge financial losses or close down.

Some Korean companies like Interpark, Coupang and TMON did create comprehensive travel platforms, but they only focused on providing domestic travel products, leaving Koreans to search elsewhere to plan their trips abroad.

“Larger travel agencies also need to come up with new ways to differentiate themselves and remain competitive in the future,” said Lee Youn-taek, a tourism professor at Hanyang University.

Other experts believe that travel agencies’ poor performance may be traced back to weaknesses in the Korean tourism industry itself.

“The problem is that Korea doesn’t offer much for tourists. If we develop and offer more attractions, we may be able to encourage Koreans to travel more within the country,” said Oh Soon-hwan, a professor of culture and tourism at Yong In University.