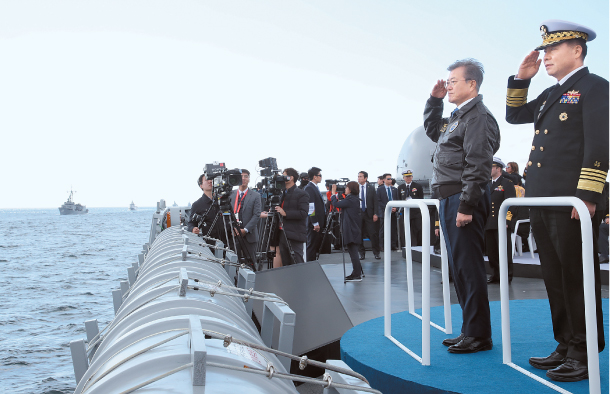 Korean President Moon Jae-in, second from right, salutes while inspecting naval vessels from 13 countries at the International Fleet Review held in waters off the country’s southern island of Jeju on Thursday. [YONHAP]

President Moon Jae-in on Thursday emphasized it was essential for South Korea to have a “strong national defense” to ensure peace and prosperity on the peninsula. He also noted that South and North Korea had embarked on a journey toward complete denuclearization and peace in a speech to top-ranking naval officials from around the world.

Standing on the South Korean Navy’s Il Chul Bong landing ship during an International Fleet Review event held in waters off the southern coast of Jeju Island, Moon said a strong national defense readiness was “critical” to the country’s path toward “peace and prosperity.”

“To reach the destination of peace and prosperity, it is critical to have strong national defense,” he said before inspecting an international fleet of 40 ships and 24 jets from 13 countries, including South Korea.

Moon’s appeared to say that without military strength, achieving stability in the region and peace with North Korea would be wishful thinking. “I will make the Navy of the Republic of Korea more powerful so that it can contribute to peace in Northeast Asia and around the world beyond just the Korean Peninsula,” he stressed, using the official name of South Korea.

While emphasizing the importance of having a strong military to fend off potential threats to national security, Moon noted the Pyongyang Declaration, an agreement that came out of his third summit with North Korean leader Kim Jong-un in Pyongyang last month. In the joint declaration, the two leaders agreed to halt all hostile military actions along the inter-Korean border in all domains - air, land and sea.

“The South and North have declared an end to military confrontation and begun a journey towards the complete denuclearization and establishment of a permanent peace regime,” he said.

While he predicted a bumpy road toward the goal of a peaceful Korean Peninsula, he vowed that his government would realize that commitment.

Moon also touched upon Jeju residents’ opposition to a naval base in southern Jeju completed in early 2016 after a decade-long protest by some residents of Gangjeong village, where the base is near, and left-leaning civic groups.

“I convey my deepest consolation to Jeju residents who felt pain from the construction of a naval base in Jeju,” Moon said. “I will do my best to heal the pain and wounds of Gangjeong village residents.”

The Blue House said Thursday that while other venues such as Busan and Jinhae District in South Gyeongsang, where the Naval Academy is located, were considered for the international event, Moon insisted on hosting the event in Jeju as a way of healing the pain felt by some Jeju residents over the naval base. “From the beginning, President Moon thought the International Fleet Review should be held in Jeju and he has been adamant about attending the event,” said the Blue House spokesman, Kim Eui-kyeom.

Moon’s remarks were delivered as part of his inspection of a fleet of ships from Korea and 12 other nations. The International Fleet Review is held once every ten years to promote naval cooperation among nations.

Of the 40 ships reviewed by Moon, 19 were foreign ships from 12 nations, including Russian missile cruiser Varyag and the U.S. Navy’s 103,600-ton Ronald Reagan aircraft carrier, which was the largest of all the 40 ships that took part in the event Thursday.