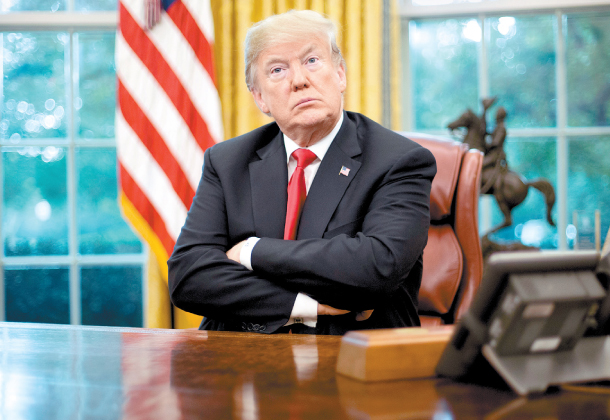 U.S. President Donald Trump rejected the notion that South Korea may lift some of its unilateral sanctions on North Korea, declaring it won’t happen without his “approval” on Wednesday.

Responding to reports that Seoul is reviewing the lifting of its so-called May 24 measures that block inter-Korean trade and investments, Trump said in the White House on Wednesday, “Well, they won’t do it without our approval.”

Trump further reiterated, when asked by a reporter to clarify if the South Korean government has been in contact with him over the issue, “Yes. They do nothing without our approval.”

South Korean Foreign Minister Kang Kyung-wha said Wednesday during a parliamentary audit in Seoul that government agencies are “reviewing” the lifting of its so-called May 24 measures, a package of sanctions essentially prohibiting South Korean individuals and companies from engaging in economic and cultural exchanges with the North and banning North Korean ships from the South’s waters.

The measures were implemented since May 24, 2010, in response to the sinking of the South Korean Navy’s Cheonan warship on March 26 that year, which killed 46 South Korean sailors. South Korean authorities said North Korea torpedoed the Cheonan, although Pyongyang denied responsibility.

Kang’s remarks during the audit session sparked backlash from opposition lawmakers. She later apologized for the confusion and clarified that the lifting of the May 24 sanctions was not a government position but something that was being reviewed by related ministries, taking into consideration the boundaries set by UN sanctions resolutions.

To Trump’s surprising comments that Seoul requires his “approval” over its own domestic measures, Kim Eui-kyeom, the Blue House spokesman, simply said in a briefing on Thursday that the U.S. president’s remark is “something that came up as he was responding to reporters’ questions.”

Kim continued, “This signifies that South Korea and the United States are in close consultation and that all matters will proceed through such understanding and consultation.”

Noh Kyu-duk, spokesman of the South Korean Ministry of Foreign Affairs, on Thursday said, “The lifting of the May 24 measures is an issue that will be comprehensively reviewed taking into consideration inter-Korean relations and the sanctions situation.”

Minister Kang, the previous day, pointed out that there is a need for “flexibility” in reviewing the May 24 measures, noting the ongoing denuclearization dialogue alongside the advancing of inter-Korean relations, and said it would have to happen “without infringing upon UN Security Council resolutions” on the North.

“At the current stage, a formal government review is not happening,” continued Noh. “South Korea and the United States have closely consulted each other on various matters, and will continue to do so, for the complete denuclearization and the settlement of permanent peace on the Korean Peninsula.”

But Noh added, “it wouldn’t be appropriate to comment” on the implications of Trump’s remark.

Unification Minister Cho Myoung-gyon during a parliamentary audit Thursday likewise reiterated that there “has been no detailed review” to lift the May 24 measures by the South Korean government.

South Korea has been cautious on the issue of reopening the Kaesong Industrial Complex and the resumption of Mount Kumgang tours. Kaesong had been the last remaining vestige of inter-Korean economic cooperation as it had been exempted from the May 24 measures. But the industrial park was eventually shuttered by the South in February 2016 in response to the North’s nuclear and missile provocations. Tours to the Mount Kumgang resort came to an end in 2008 after a North Korean soldier fatally shot a South Korean tourist.

Cho addressed the complexities of reopening the Kaesong Industrial Complex during the audit. To a lawmaker’s question on whether Kaesong could be reopened without infringing upon UN Security Council sanctions, Cho admitted that the “reality is different” because with the South Korean government shutting down Kaesong in 2016, “North Korea’s nuclear development and the Kaesong complex have become interconnected.”

He continued, “The international society also strongly perceives it this way,” referring to Kaesong being seen as generating money used for the North Korea’s nuclear and missiles program.

He said the reopening of the complex “will have to match the progress of denuclearization.”

He added, “We would need to take a comprehensive approach and respond accordingly.”

Many of the May 24 measures overlap with UN Security Council sanctions on the North.

Thus, even if the South Korean government lifts its unilateral measures, the move would be largely symbolic for the time being because of existing UN Security Council sanctions on the North, including sectoral bans on the export of goods that cover items ranging from coal and minerals to textiles, that will continue to block trade and investment in the country.

“President Trump has been very clear from the beginning that sanctions relief will follow denuclearization,” Robert Palladino, a deputy spokesman of the U.S. State Department, told reporters on Wednesday.

The Russian Foreign Ministry on Wednesday proposed five-way talks including the two Koreas, China and the United States.

This followed a meeting between North Korean Vice Foreign Minister Choe Son-hui and her Chinese and Russian counterparts in Moscow to coordinate a trilateral approach to the denuclearization process.

They called on the UN Security Council to ease the current sanctions against Pyongyang and expressed opposition to unilateral sanctions as well.