Lanterns are now a no-no at Korea’s festivals

Lanterns are now a no-no at Korea’s festivals 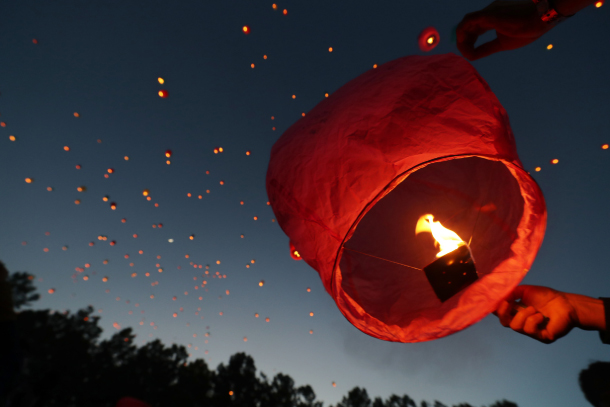 Local governments across Korea are canceling sky lantern events after police blamed one of the lanterns for a massive fire at an oil tank in Goyang, Gyeonggi, on Sunday.

County authorities in Jinan, North Jeolla, announced that it will not release sky lanterns at its upcoming red ginseng festival next Thursday. Provincial officials in Jeju also canceled the lantern-making event at the buckwheat festival in Seogwipo this weekend.

Sky lanterns will also be absent from next year’s Baekje Cultural Festival - an annual commemoration of the ancient Korean kingdom’s legacy - held in Gongju, South Chungcheong, according to festival organizers.

These cancellations follow the revelation that a massive blaze that burned through the oil storage tank in Goyang last Sunday was caused by a sky lantern released by a Sri Lankan construction worker at a nearby worksite.

In surveillance footage released by police, the lantern can be seen falling on a patch of grass near the oil storage facility and igniting flames that spread into the ventilation system of the tank. It triggered an explosion that was followed by a massive fire that burned for nearly 17 hours.

Sky lanterns are small hot air balloons usually made of paper or synthetic fiber with a candle or paraffin inside, which when lit cause the lantern to rise into the air. A symbol of good luck, they are a common sight at festivals in Korea. They are a popular event item for organizers as an inexpensive way to create a festive mood at night.

A single lantern usually sells for around 500 to 1,000 won ($0.44 to 0.87) from vendors in China, where the tradition of flying sky lanterns first originated.

The cancellation measures by local governments so far have been entirely voluntary. Sky lanterns are not prohibited under current laws, and authorities have not yet issued a warning against their use. A fire safety law passed in December last year mandates that festival organizers must obtain permission from local fire authorities to release lanterns at their events.

Sunday’s accident also prompted the organizers of festivals that have already taken place this year to review their plans for next year’s events.

Pyeongchang County in Gangwon, where the Winter Olympics were held this year, hosts an annual cultural festival to celebrate the works of local writer Lee Hyo-seok, one of Korea’s most famous authors. One of the festival’s most popular events involved the release of hundreds of colorful lanterns filled with personal wishes into the county’s famed buckwheat fields. Organizers said they would cancel the lantern event altogether.

On Busan’s scenic beaches, tourists are often spotted sending off sky lanterns for good luck around New Years’ Eve. But now Haeundae Beach, the city’s most famous seaside destination, has signs banning the sale and release of sky lanterns in the area.