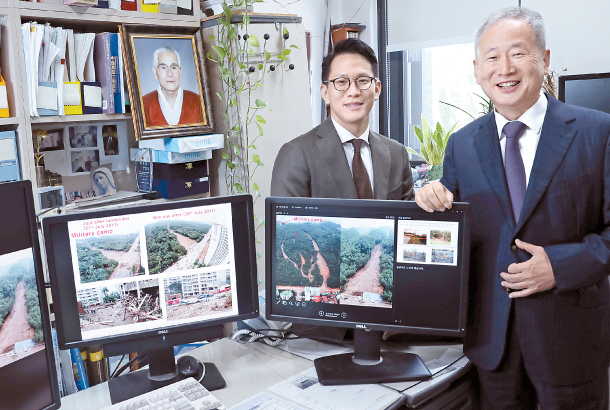 Landslide expert Lee Su-gon, right, talks to his son Lee Young-suk, left, in his office. Both are examining pictures of landslides that the elder Lee visited in the past. Behind them is a picture of Lee’s father, Lee Joung-hwan, who was also a geologist. [KIM KYUNG-BIN]


Sangdo Public Kindergarten, located in Dongjak District, southern Seoul, was severely damaged on Sept. 7 after a retaining wall at a nearby construction site let out. One expert issued a warning that the collapse could happen months before it did. Lee Su-gon, a civil engineering professor at the University of Seoul, warned in March that the construction from a nearby housing complex would cause the base of the kindergarten to eventually sink. His warning was not taken into consideration by the district office.

Lee is no stranger to his warnings being rejected and ignored. In October 2010, ten months before a landslide occurred at Mount Umyeon in Seocho District, southern Seoul, Lee submitted a 49 page policy proposal to then-Seoul Mayor Oh Se-hoon about the possibility of a landslide. His proposal was not accepted.

After a landslide at Mount Umyeon in July 2011, Lee was validated as a landslide expert by the public. However, he said that nothing changed after he received recognition. This, however, does not stop Lee from assessing sites to check for the possibility of a landslide or embankment collapse. This year alone, he has visited 15 places. His 2003 Kia Sorento, which has 410,000 kilometers (254,762 miles) on it, is proof of his passion.

“The residents who live near a landslide have no one to complain to, which is why they come ask me. Even the Sangdo Public Kindergarten asked me [to inspect the area] months before the cave-in occurred,” said Lee.

In August, he visited a landslide that occurred near the entrance of a tunnel that goes through Mount Nogo in Mapo District, western Seoul. He also went to Gasan-dong in southern Seoul to examine a retaining wall that collapsed. On Sept. 7, he was called upon to inspect a sinking mountain trail on Mount Sapae, north of Seoul.

Lee said that the collapse of a retaining wall and a stone embankment is an example of a man-made landslide. These disasters occur when construction is pushed forward without a clear analysis of the soil’s sediment composition.

Lee graduated from Korea University in 1980 with a degree in earth and environmental sciences and went on to complete his master’s degree in engineering geology at the University of Leeds and his doctoral degree in Imperial College London. His doctoral thesis on the evaluation of weathering and the geotechnical characterization of Korean granite was dedicated to his parents.

“My late father, who passed away in 2013, advised me on adopting a dissertation thesis that is related to our nation’s situation,” said Lee.
Lee is not the only expert in geology in his family. In fact, he is from a family of geological experts that spans over three generations.

His father, the late Lee Joung-hwan, graduated from what is now Kim Il Sung University in Pyongyang in 1943 with a degree in mining. In 1950, he graduated from Seoul National University with a degree in geology. After completing his education, Lee’s father started his career as the executive director of the Korea Institute of Geoscience and Mineral Resources (then known as the National Mining Research Institute) and as a grade-one civil servant for the Ministry of Science and Technology for 25 years. During that time, he helped source coal that was buried in Gangwon. He also contributed to distributing coal briquettes to households, preventing Korea’s deforestation.

Lee’s son, Lee Young-suk, graduated from Hanyang University’s College of Engineering. In 2014, he went on to complete a degree in soil mechanics at Imperial College London and is now currently working as an engineer at the research and development department of Hyundai’s Engineering and Construction Division. His job requires him to visit construction sites and identify the soil sediment. Lee’s objective is to suggest a mathematical method of construction according to the state of the sediment. In June, he helped determine how to successfully plant a post at the construction site of the Chacao Bridge in Chile.

The first, second and third generations of the Lee family all majored in geology. However, their field of expertise differs. Lee Su-gon’s father’s area of expertise was mineral deposits, whereas Lee specializes in granite and landslides. His son targets sediment composition and mathematical dynamics. Even though each generation is active in different fields — his father in public administration, himself in the academics and his son in industry — the love they share for geology is similar.

Regardless of his love for academics, Lee admits that his major was an obstacle for him once.

Engineering geology first became a separate discipline in the 1960s. The need for the two disciplines to be combined was spurred by a landslide in Vajont, Italy, in 1963. The landslide, which occurred near the man-made lake created by the construction of the dam, killed over 2,000 people. After inspection, it was revealed that the landslide occurred because the dam was built on top of a limestone foundation. Limestone easily breaks apart when it makes contact with water.

Lee is no stranger to hands-on experience. On Sept. 2, Lee Su-gon and his son Lee Young-suk took the clinometer that was used by Lee’s father and visited Mount Baebong. The mountain is located in Dongdaemun District, eastern Seoul, right behind the University of Seoul. They visited the mountain because a discontinuous joint in the granite rock mass had been found in the mountain. The clinometer indicated the slope of the mountain has 25 degrees.

The JoongAng Ilbo accompanied Lee and his son on this trip. Below are edited excerpts from the interview.


Q. Are clinometers in use nowadays?

A. Lee Young-suk: Not many people use a clinometer nowadays because you can use your smartphone to measure the slope’s inclination.

Do you often go to sites with your son?

Lee Young-suk: When I was an undergraduate, my major was electronic engineering. However, after following my father to the Mount Umyeon landslide, I decided to double major in civil engineering. I completed my master’s degree at Imperial College London, just like my father.

What do you think is the reason for the Sangdo Public Kindergarten collapse and the sinkholes?

Lee Su-gon: Not much research was done about the makeup of the soil during the planning process. This, inevitably, leads to poor planning and construction. When a disaster occurs, excess rainwater is often a reason, but in most occasions, the disasters are caused by human error.

Lee Young-suk: Natural elements like heavy rainfall can be a reason. However, I believe that you need to go to the site and see the condition of the soil for yourself, like my father, to come to a conclusion. You cannot determine the reasons for a certain disaster only through mathematical calculations.

Was there any elements of discomfort since both of you are active in different fields?

Lee Young-suk: I just wish my father wouldn’t come to [inspect] the company I work in.

What is your view on the academic situation of geological engineering now?

Lee Young-suk: When I was studying in London, most of my colleagues had a lot of experience working in the field. The more experience you have, the deeper you understand [geological engineering].