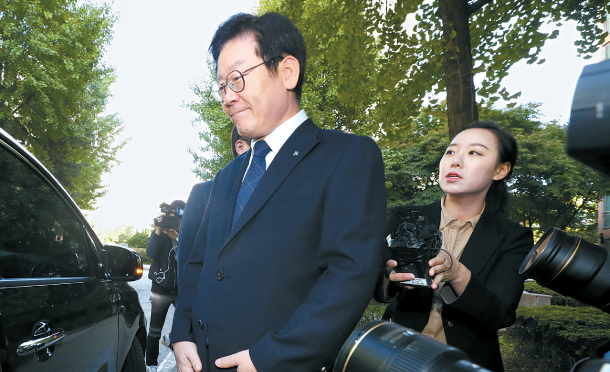 Gyeonggi Gov. Lee Jae-myung, left, gets in his car to go to work Friday morning after police raided and searched his home. [YONHAP]

Police raided the home of Gyeonggi Gov. Lee Jae-myung on Friday in an ongoing probe into allegations that he abused his power when he served as Seongnam mayor to force his older brother into a mental institute.

A Bareunmirae Party special committee investigating corruption in Seongnam accused Lee of power abuse and spreading false information when he was running for Gyeonggi governor in June.

Lee was mayor of Seongnam from 2010 to earlier this year, serving two terms. He was elected Gyeonggi governor in June. The committee believes that Lee abused his power as head of the Seongnam city government to force his brother into a mental hospital.

“The committee accuses Lee of violating the Public Official Election Act’s Article 250 on Publication of False Information by denying on TV that he tried to force his older brother into a mental institute,” Jang Yeong-ha, chair of the committee, stated in a press release on June 10.

“It also accuses Lee of abusing his power as mayor of Seongnam to try to force his brother into a mental institute.”

The normal procedure usually involves a family or close friend reporting a person with mental health problems to health authorities, followed by a diagnosis by doctors and sometimes an approval from head of the local government of the city where a hospital is located to finally admit the patient.

Lee’s brother, Lee Jae-seon, was admitted to a mental hospital in November 2014 while Lee Jae-myung was mayor of Seongnam. He died of lung cancer last year.

The committee also made a criminal complaint against Lee for denying on TV an alleged extramarital affair with actress Kim Boo-sun from 2007 to 2009, and for allegedly pressuring companies to sponsor Seongnam’s football club.

Police said the raid on Friday was a continuation of the probe from June when the Bareunmirae Party’s committee made the complaint against Lee, but that they weren’t looking for evidence related to the allegation concerning actress Kim.

“I don’t know what the big deal is,” Lee told reporters on his way to work Friday morning. “They make a fuss and come here to raid [my home,] but all they take from me is my cellphone.

“It’s something that happened six years ago,” he said. “I will hold an official press briefing soon.”

“I stopped your father from being forcibly hospitalized,” Lee Jae-myung’s wife, Kim Hye-kyung, tells the daughter of Lee Jae-seon, in a recorded phone conversation in June 2012.

The recording surfaced on social media platforms around the time of local elections in 2014, when Lee was running for a second term as Seongnam mayor.

Some netizens suspected that Lee tried to force his older brother into a mental hospital but somehow his wife stopped him. Lee Jae-seon’s wife, Park In-bok, spoke to the Seongnam Ilbo in June 2014 to confirm this claim.

“The allegation is true,” Park told the paper. “[My husband] had uploaded a comment criticizing Seongnam city government policies on its website. After that, [Lee] made my husband seem like a crazy person and barred all communications from him.

Then his wife called us to say that she tried to stop Lee from hospitalizing my husband but that she will not try anymore.”

Lee’s aide has since admitted to media outlets that the voice recording was Kim speaking to Lee Jae-seon’s daughter, but added that Kim meant to say “I stopped your father from being diagnosed with mental illness.”

Lee’s campaign committee issued a statement during the local election of 2014 on Lee Jae-seon’s erratic behavior.

“Lee Jae-seon has had mental health issues and doctors have diagnosed him to have symptoms of manic depression,” the committee said in its statement.

“Lee Jae-seon has asked Mayor Lee for special consideration for jobs in the government, posted indiscreet criticisms of the city policies on the city government’s website, threatened to kill his mother and set fire to her house, and on July 15, 2012, he did go to her house and physically abuse her and two younger sisters … But these are very private affairs of the candidate and we ask media outlets to refrain from continuing to report on them.”

The allegation that Lee Jae-myung tried to force his older brother into a mental hospital surfaced again, however, in January 2017, in time for the presidential election. Lee was a prospective candidate.

“Two hospitals in Seongnam sent diagnoses of Lee Jae-seon to a district health office in Seongnam in 2012, which falls under the authority of Mayor Lee,” Chosun TV reported on Jan. 1, 2017.

“Lee Jae-seon and his wife have claimed that Lee Jae-myung was behind this attempt to forcibly hospitalize Lee Jae-seon.”

“My mother did request a diagnosis of my brother from a district health office,” Lee wrote on his account on Jan. 1.

“But that health office falls under the authority of Seongnam mayor, so we did not go through with the procedure because it may cause political problems. I have explained this many times before.”

“Look at who signed the papers agreeing to hospitalize Lee Jae-seon for his mental illness,” Lee wrote on his account on Jan. 2. “His wife Park In-bok and daughter Lee Joo-young.”

Lee uploaded photos of the papers, showing Park’s signature under an agreement to hospitalize her husband on Nov. 21, 2014.