Moon says end to war is ‘only a matter of time’

Moon says end to war is ‘only a matter of time’ 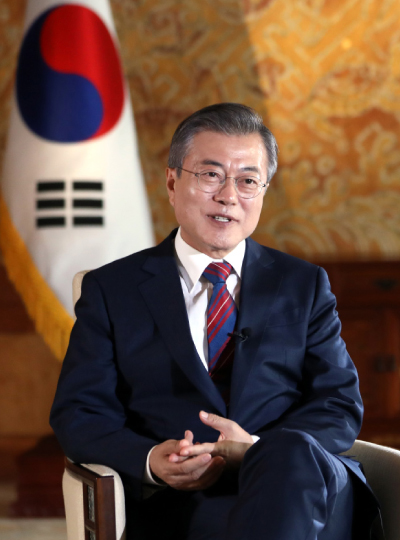 South Korean President Moon Jae-in in an interview with the BBC at the Blue House on Friday.[BLUE HOUSE]

South Korean President Moon Jae-in on Friday said he believed it was only a “matter of time” before related countries declare an end to the 1950-53 Korean War in an interview with the BBC at the Blue House.

The conflict ended in an armistice, not a peace treaty, leaving the two Koreas technically at war. This is one of the primary reasons that the United States keeps military forces stationed in South Korea.

“Issuing an end-of-war declaration is something that I had ample discussions with the U.S. side, including President Trump,” said Moon, according to a transcript of the interview released by the Blue House Friday afternoon.

He went on to say there was a “shared understanding between South Korea and the United States” that it would be better for the declaration to be announced “at the earliest time” as a “political statement.”

Moon said that declaring an end to the war would be one of the corresponding measures taken by the United States in response to the North’s denuclearization steps and that it would lead to negotiations for a peace treaty as a next step.

“An end-of-war declaration is a political statement signaling that the United States and North Korea have ended a long-running hostile relationship. If that happens, it will lead to the beginning of negotiations for a peace treaty, and in the end, the peace treaty will be signed with the complete denuclearization [of the North],” Moon said.

The president also reaffirmed North Korean leader Kim Jong-un’s commitment to denuclearization, emphasizing that the North promised to give up nuclear weapons “for the sake of economic growth.”

He also said that North Korean leader Kim told him there would be “no reason whatsoever” for him to maintain a nuclear arsenal under the international sanctions choking the North’s economy if his “regime’s security was guaranteed” by the United States.

Moon also said what Kim had meant by “complete denuclearization” would begin with a suspension of nuclear tests and missile launch tests, followed by “termination of nuclear facilities that produce nuclear weapons and develop missiles and of all existing nuclear arsenal and material.”

Moon said Kim had displayed “humble leadership that showed so much respect to his seniors in an honest manner,” and that he had a clear vision to develop his country. Moon fondly recalled his speech to 150,000 North Koreans at a stadium in Pyongyang on Sept. 19. He said was a “great honor” for him to address North Koreans, as he was the first South Korean president to deliver such an address.

Moon said that the key to improving human rights in North Korea would be bringing the North into contact with the outside world through cooperation with the international community and South Korea, rather than international pressure on the North to change its behavior.

Moon’s BBC interview was conducted a day before his nine-day trip to Europe, which kicks off in Paris and will be followed by Rome, the Vatican, Brussels and Copenhagen. Moon embarks on the trip Saturday and returns home on Oct. 21.

South and North Korea will hold high-level talks in Panmunjom on Monday to discuss ways to implement the Pyongyang Declaration, the product of the third Moon-Kim summit in the North Korean capital last month. The South Korean delegation will be led by Unification Minister Cho Myoung-gyon.