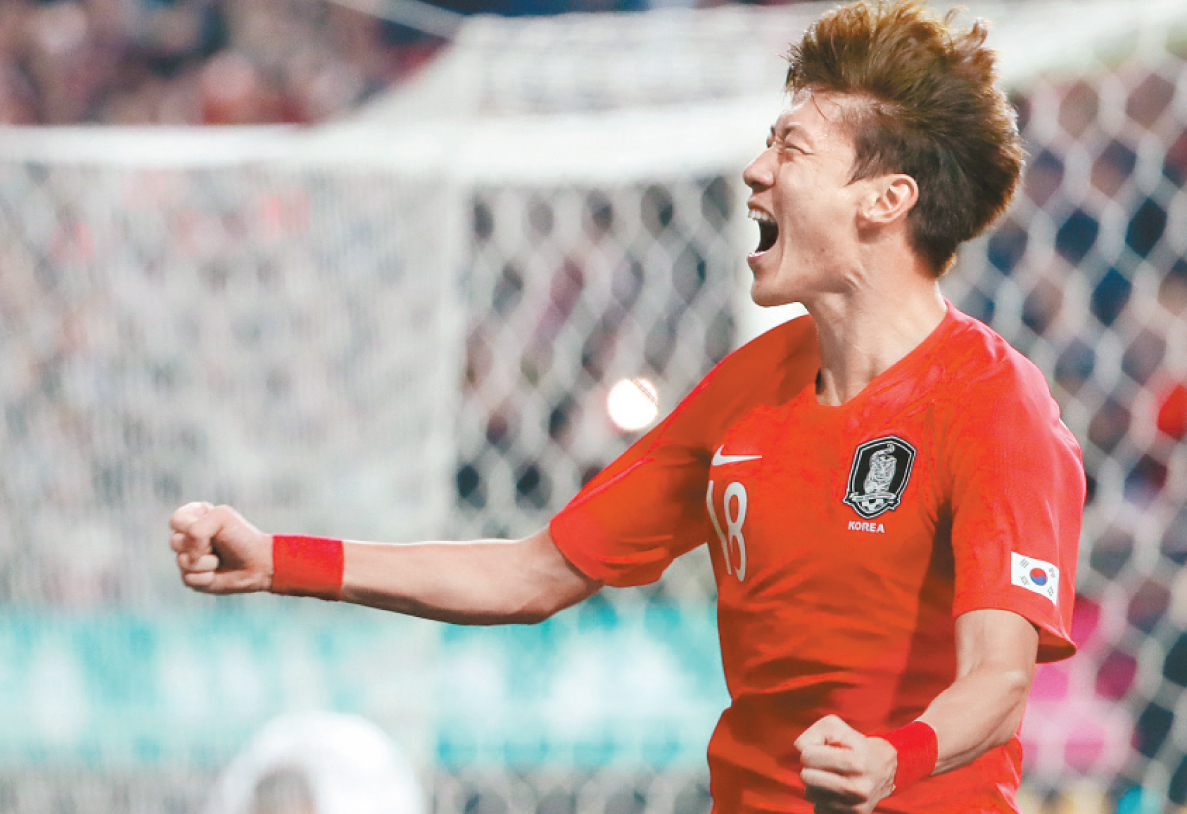 Korean striker Hwang Ui-jo on Friday ended his scoring drought with the senior national team, scoring a goal against Uruguay in a friendly match.

Hwang scored the game’s opening goal in the 66th minute at Seoul World Cup Stadium in Seoul, where the national team collected a 2-1 win.

Hwang’s goal came off a missed penalty kick by Son Heung-min. After a save by Uruguay goalkeeper Fernando Muslera, Hwang pounced on the rebound with a follow-up that found the back of the net.

It was Hwang’s first goal for the senior national team since October 2015. It was also his second goal for Korea in 14 caps.

“My first thought was that Son would make the penalty,” Hwang said after the match. “I think I had some luck, but I was able to score the goal because I didn’t stop concentrating on the ball.”

Korean fans had big expectations for Hwang after the 18th Asian Games in Indonesia, where he scored nine goals and led Korea’s under-23 team to win a gold medal. He was one of the three overage players for Korea at the Asian Games.

But some critics had doubts whether he could also show his attacking prowess against senior-level teams from outside Asia.

But against world No. 5 Uruguay, Hwang was finally able to break his scoreless streak on the senior side and proved that he is now one of the hottest Korean strikers.

Hwang got into his attacking rhythm in the second half. He got Korea’s second shot on target in the 49th after receiving a pass from Hwang Hee-chan.

Hwang then delivered a breakthrough for the hosts in the 65th after he earned a penalty kick. The Gamba Osaka striker was brought down by Uruguay center back Sebastian Coates in the box when trying to receive a pass from Nam Tae-hee.

“Uruguay have strong defense and their defenders like [Diego] Godin are powerful and physical,” he said. “But I tried to take advantage of their physical play.”

Korean captain Son Heung-min stepped up to take the spot kick, but was denied by Muslera. Hwang then corralled the rebound and made it 1-0 for Korea.

“Our victory is the result of a team effort,” he said. “I should have made more chances for my teammates and taken shots when I had chances.”

Hwang is likely to get a leg up on his competition for the starting striker spot. Bento has also tested FC Augsburg forward Ji Dong-won and Stade de Reims’ Suk Hyun-jun as strikers, but so far, Hwang is the only forward to have scored.

“These days, I just play with a lot of confidence,” he said. “But for a starting striker spot, competition is inevitable and it’s not strange to see other forwards making a start ahead of me. That’s why I have to work harder and show better performance.”