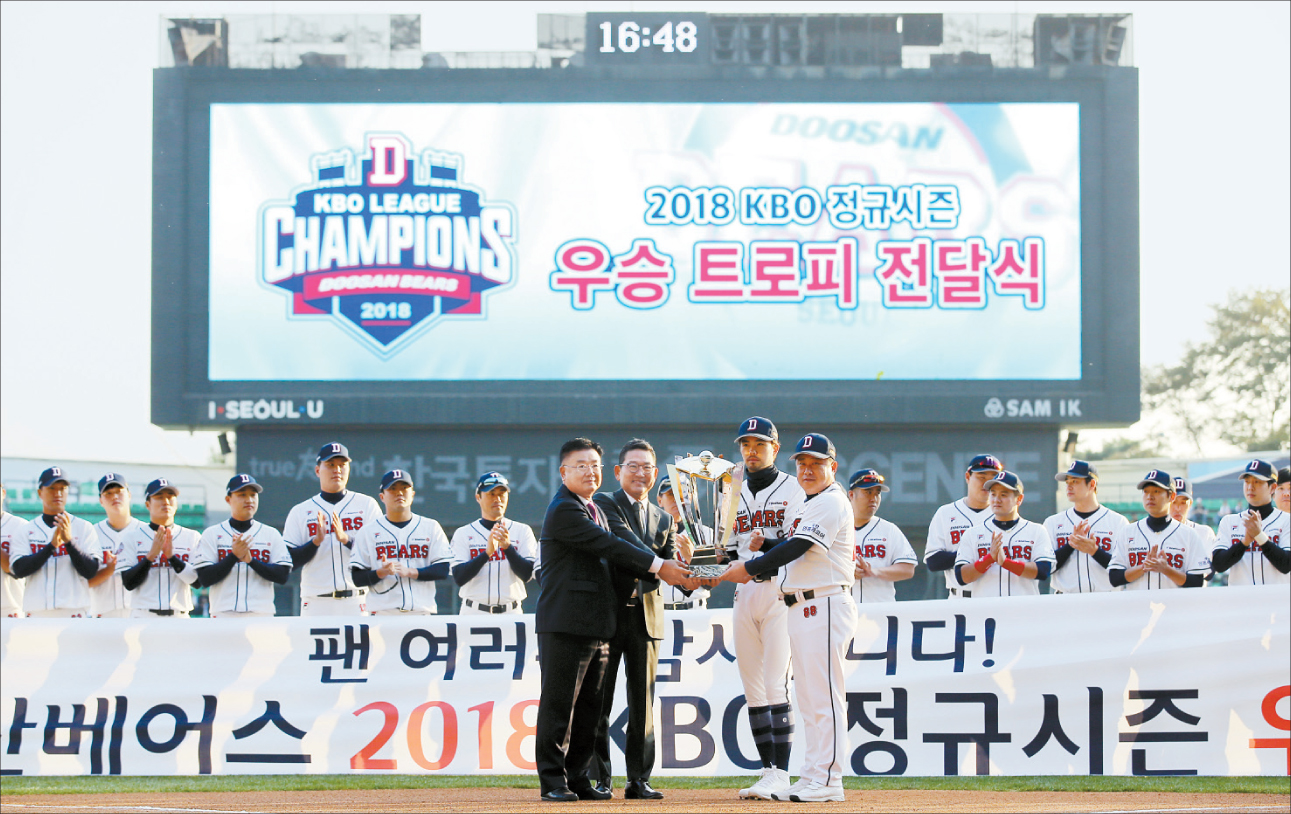 The Doosan Bears celebrate winning the regular season following their 13-2 win over the Nexen Heroes at Jamsil Stadium in Seoul on Sept. 25. [YONHAP]

The 2018 KBO regular season ended with little fanfare yesterday, two weeks and six days after the Doosan Bears ran away with the pennant and a one-way ticket to the Korean Series.

The Bears dominated the KBO all season. They took first place months ago and showed little interest in giving up their status. Much like in 2016, Doosan won the title long before the season ended, taking a lot of the drama out of the KBO’s final weeks.

Things weren’t much more exciting further down the table. The SK Wyverns, Hanwha Eagles and Nexen Heroes all secured berths in the postseason before September was over - although what position they would go through in wasn’t decided until much later. Only the contest for the wildcard spot offered any real excitement.

The battle for fifth place dominated the last few weeks of the season, with the Kia Tigers, Lotte Giants and Samsung Lions competing to secure a final shot at the postseason. Adding to the excitement, the Giants and Tigers faced each other on three separate occasions during the final week of the regular season.

The Bears ended way out in front with 93 wins, 51 losses and no ties, the best regular season record in KBO history, and a lead of 14.5 points over the Wyverns. The Bears victory dwarfs their huge 2016 win, when they ended the season nine games ahead of the second-place NC Dinos but with a similar scoresheet - 93 wins, 50 losses and one draw.

The KT Wiz ended in the penultimate position with 59 wins, 82 losses and 3 ties, something of a minor victory for a team that has never finished higher than last place in its four year history. Finally, in a finish that would have been unimaginable at the start of the season, the NC Dinos sit in last place with 58 wins, 85 losses and a tie. This year marks the first time that the Dinos have failed to reach the postseason since their debut season in 2013.

Due to this year’s unusually late regular season finish - the result of the Asian Games break in August - the postseason will begin immediately this week. The wildcard series will kick off tomorrow with the Tigers facing Nexen at the Gocheok Sky Dome in western Seoul. As the fourth-ranked team has a one game advantage going into the series, a loss on Tuesday would mean instant elimination for Kia.

The postseason proper will then begin on Friday. The first round of the playoffs will see the wildcard winner take on the Hanwha Eagles in a five-game series that will begin in Hanbat Stadium, Dajeon.

The winner of that series will earn a spot in the second round of the playoffs, facing the Wyverns in a five-game series set to begin in Munhak Stadium in Incheon on Oct. 27.

The overall victor of the playoff series will earn the right to take on the Bears in the Korean Series, which starts on Nov. 4 in Jamsil, southern Seoul. This year’s Korean Series will be the latest ever, with the champion potentially not being named until as late as Nov. 12.