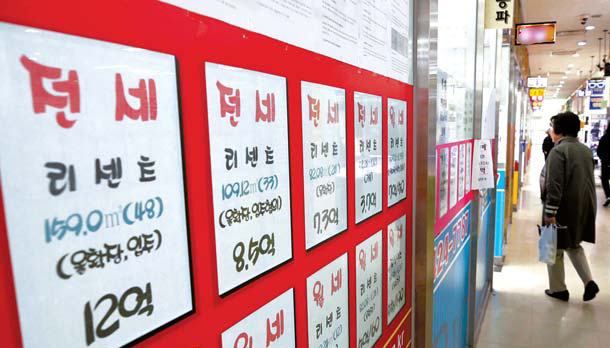 Although around 50 real estate offices conduct business in the 5,563 household apartment complex, there hasn’t been a single registered transaction in the past month.

“I haven’t dealt with a sales contract in over a month,” said Lee Ki-choong of Daewang real estate office. “Those who want to buy and those who want to sell - everyone is reluctant.”

The government’s recent “Sept. 13 real estate measure,” which enforced strong regulations to cool down the Seoul apartment market, is shaking things up. Transactions have dramatically decreased while the upward trajectory of apartment prices has waned. Meanwhile, transactions in Gangnam, southern Seoul, which saw the most interest from buyers earlier in the year, have completely disappeared. The government’s September measure, which virtually blocks mortgage loans for multiple homeowners, has likely had the most effect on the Gangnam market.

According to the Ministry of Land, Infrastructure and Transport, 675 apartments changed hands in Seoul over a 29-day period between Sept. 13 and Oct. 11 based on contract signing dates. That was only 6.1 percent of the 11,144 transactions that took place over the 29-day period prior to the government’s announcement from Aug. 15 to Sept. 12.

Over the same period, transactions in Mapo District decreased from 357 to 26 and transactions in Nowon, Seongdong and Dobong Districts all decreased to below 10 percent. Even when accounting for the transaction registration period, which can run up to 60 days, sales have decreased sharply across the board.

Sixteen houses were sold in the 1,612-unit Acro River Park in Banpo-dong, Seocho District, in August, while 14 changed hands in the nearby Raemian Firstage complex. But there have been none since the September measure.

The situation is no different in the Mapo Raemian Prugio apartment complex in Mapo District, that saw 39 sales in August and none since the new measure.

According to a homeowner who requested anonymity, selling their 146 square meter apartment in Daechi-dong, Gangnam District has been difficult. “After it didn’t sell at 3.2 billion won, I lowered the price to 3 billion won but people don’t even come and see it.”

Prices in southern Seoul have steadied. There are fluctuations though with asking prices falling by 100 to 200 million won for urgent sales.

A 76 square meter apartment in Daechi-dong, Gangnam District that sold for 1.85 billion won is now listed at around 1.75 billion won.

A real estate agent in the neighborhood, Chung Bo-gyung, said, “Those who want to buy are waiting with expectations of falling housing prices after loan restrictions made it difficult to borrow money and talks of a rate increase.”

Meanwhile, the Ministry of Land has assessed the September real estate measure as a success. During an audit by lawmakers on Oct. 10, minister Kim Hyun-mee said, “The overheated real estate market is cooling down after the Sept. 13 measure.”

Experts expect the current situation to continue until the end of the year.

“Dried up transactions will continue for the meantime due to pressure from housing prices rising over a short period of time and concerns over loan regulations and an interest rate hike,” said Park Hab-soo, a senior real estate researcher at KB Kookmin Bank.

Pressure on the real estate market could increase and cause prices to fall, as a plan to increase the general real estate tax awaits a decision in the National Assembly and the government plans to develop new cities.

For some, concerns over a steep price fall are unwarranted with the large number of potential buyers. “Even if the interest rate rises for loans, loans will be manageable for now,” explained Ham Young-jin, chief of real estate app Zigbang’s Big Data Laboratory. “Homeowners also will not dump the market with listings due to the pressure from [real estate] sales taxes.”