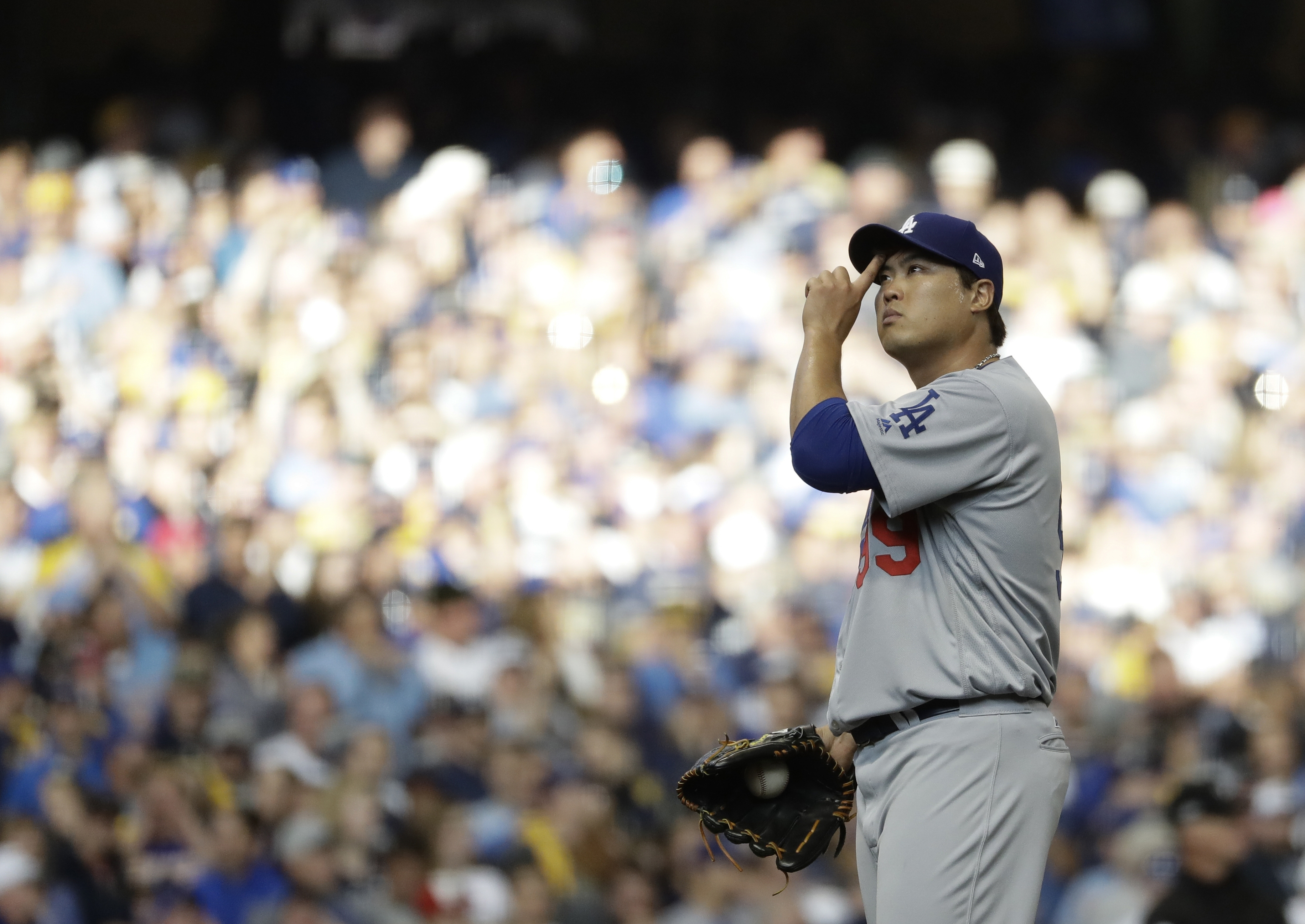 Ryu Hyun-jin prepares to pitch during the second game of the National League Championship Series against the Milwaukee Brewers at Miller Park in Milwaukee. [AP/YONHAP]

Ryu was charged with two earned runs on six hits, including a home run, in 4 1/3 innings in Game 2 of the best-of-seven set at Miller Park in Milwaukee on Saturday. Ryu was pulled in the fifth with the Dodgers down 2-0, but his teammates got him off the hook by rallying for a 4-3 victory.

Ryu entered this contest with a 2-0 record in four previous postseason starts with a 1.96 ERA.

This was Ryu’s shortest outing this year since lasting four innings against the St. Louis Cardinals on Aug. 21.

Ryu was coming off a brilliant start in Game 1 of the NL Division Series versus the Atlanta Braves on Oct. 4, when he tossed seven shutout innings and struck out eight in a 6-0 victory.

After the Dodgers dropped the opener on Friday 6-5, Ryu was tasked with helping the club get a split on the road before the series moves to Los Angeles on Monday.

Ryu was locked in a pitching duel with the Brewers starter Wade Miley through four innings. Ryu held the Brewers to three hits while striking out four, and Miley one-hit the Dodgers over the same stretch.

But then the Korean came unglued in the fateful fifth.

With one out, No. 8 hitter Orlando Arcia drove the first-pitch cutter from Ryu over the center field wall for a solo home run, putting the Brewers up 1-0.

Then Miley, who’d hit a double off Ryu in his first at-bat in the third inning, battled his counterpart for nine pitches before lining a single up the middle.

Ryu then fell behind in the count 2-0 against Lorenzo Cain and got the first strike on a cutter on the outside edge. Ryu came back with the same pitch but left it on the inner part of the plate, and Cain pounced on it for a double to the left field corner.

Madson intentionally walked Yelich to load the bases and set up a double play. Ryan Braun hit a soft grounder to shortstop Manny Machado, who only had a play at first base, and that allowed Miley to sprint home to make it 2-0 Milwaukee. That run was charged to Ryu.

Madson struck out Jesus Aguilar to end the inning and complete the line for Ryu, who threw 47 of his 72 pitches for strikes.

Travis Shaw’s solo blast in the bottom of the sixth inning off new Dodgers pitcher, Alex Woods, made it 3-0 for the Brewers.

Just when it seemed the Dodgers were headed for their second straight loss, the lineup woke up against the Brewers’ vaunted bullpen.

The visitors got two runs in the top of the seventh. Then in the eighth, Justin Turner, who struck out four times in Game 1, launched a go-ahead, two-run home run off Jeremy Jeffress, giving the Dodgers a 4-3 lead.

Kenley Jansen worked the scoreless ninth to seal the victory.