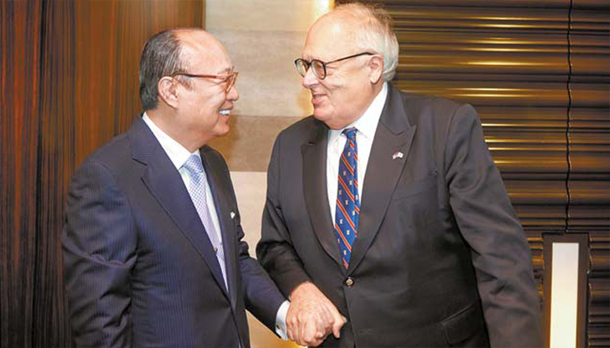 According to Hanwha Sunday, Kim emphasized that the close relationship between the two countries should be maintained, especially when their alliance has brought North Korea to the table for negotiations with the international society on various issues including denuclearization during the two-hour meeting with Feulner.

The founder of the U.S. think tank agreed that the alliance between the two countries has been the cornerstone to making denuclearization negotiations happen and added the two should continue close cooperation.

As for the second summit meeting between U.S. President Donald Trump and North Korean leader Kim Jong-un, Feulner said there needs to be a lot of preparation before it takes place. The meeting is expected to take place after the U.S. midterm elections next month.

“Uncertainties in bilateral trade have mostly been cleared up after the renegotiation of the Korea-U.S. free trade agreement, however Korean businesses are still having trouble,” Kim said, as the Trump administration presses on with protectionist policies.

Feulner said the major target of the U.S. administration’s trade policies from the beginning has been China, adding that renegotiations on FTAs with countries including Korea, Mexico and Canada have already been settled.

According to the Heritage Foundation founder, the United States will continue to pressure China in terms of trade and investment.

Feulner is known as an influential conservative in Washington and a strong supporter of Korean industry. He and Kim have maintained a relationship for 30 years from the early 1980s until now through regular meetings held to discuss current affairs involving Korea-U.S. relationships.