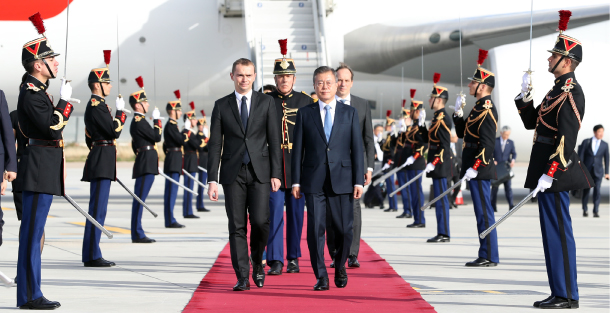 Korean President Moon Jae-in, right, inspects a French honor guard with France’s Minister of State Olivier Dussopt, left, after arriving at the Paris Orly Airport on Saturday, local time, for a four-day state visit that will include a summit with French President Emmanuel Macron. [YONHAP]

President Moon Jae-in called on France to help South Korea denuclearize the Korean Peninsula and establish permanent peace during a speech made to a crowd of some 200 South Korean expats in Paris Saturday.

The remarks were made shortly after Moon touched down in the European country earlier the same day for the first leg of his four-nation tour, which includes stops in Italy, Belgium and Denmark. Moon departed Seoul Air Base in Seongnam, Gyeonggi on Saturday morning and plans to return home on Oct. 21.

His meeting with South Korean expats was the first event on his schedule in Paris.

Moon stressed that he was sure peace will arrive on the Korean Peninsula in the near future and that he’d feel more empowered if people in France - “the nation of liberty, equality and fraternity” - supported him. The Blue House chief thanked the audience for their remote participation in the candlelight vigils of 2016 that played a key role in ousting the former Park Geun-hye administration, saying he will “not forget” how grateful he was to them. Moon was elected through a snap election in May 2017.

The South Korean president, at one point, recalled the speech he made on Sept. 19 in front of 150,000 Pyongyang citizens at the May Day Stadium during his three-day trip to the North for a summit with North Korean leader Kim Jong-un, saying the regime allowed him to deliver his message without any conditions.

“I had to mention complete denuclearization, I had to gain traction from the Pyongyang public and I had to earn support from the South Koreans watching through television, so I felt pretty jittery about making that speech,” said Moon, “but the North Korean government didn’t lay out any conditions and left it entirely up to me.”

The gesture, he pointed out, was proof that South-North relations have drastically improved lately, and so has mutual trust.

Moon said he wanted to take things further by holding an inter-Korean summit on a regular basis. Moon met Kim three times this year and a fourth meeting is currently in the works.

France is a nuclear state and one of five veto-wielding countries in the United Nations Security Council along with the United States, China, Russia and the United Kingdom.

But the country is one of only two countries in the European Union alongside Estonia that has yet to establish diplomatic ties with Pyongyang.

On Monday, he’s planned to hold a summit with French President Emmanuel Macron and participate in a state banquet at the Elysee Palace hosted by Macron and his wife, Brigitte.

Moon is scheduled to attend a meeting between French and South Korean business leaders Tuesday and leave for Rome in the afternoon.