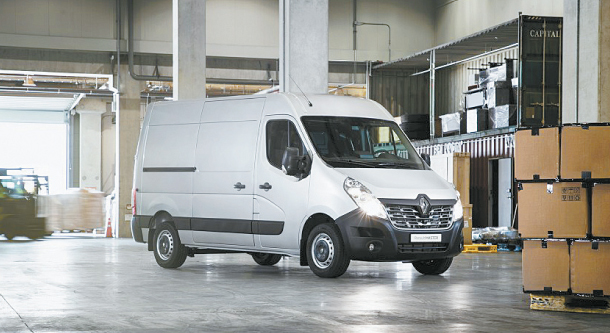 Renault Samsung Motors launched two trims - the Standard and the Large - of its midsize van Master in Korea on Monday. [RENAULT SAMSUNG MOTORS]

The unit of France’s Renault Group will offer a three-year, 100,000 kilometer (62,137 miles) warranty on major parts, including the engine. According to the company, competitors normally offer two-year, 60,000 kilometer warranties on similar vehicles.

Renault Samsung is selling two types of Master vans in Korea: the standard (S) and the large (L). The large has a longer body.

To be competitive in the commercial vehicle market in Korea, which has long been dominated by Hyundai Motor and Kia Motors, Renault Samsung is equipping the Master, a midsize van, with a range of safety features, including a lane departure warning system, which alerts a driver when the vehicle is moving out of lane, and an extended grip control, which adjusts the powertrain to road and weather conditions.

The carmaker said the model is the first small truck offered in the country with a lane departure warning system.

“Until now, it has been difficult for small and medium-size enterprises to utilize midsize vans due to their high price and maintenance fees,” Renault Samsung Motors said in a written statement.

“Master will lead the way in the market, with a reasonable price and low maintenance fees as well as convenient after sales service.”

The Master S starts at 29 million won ($25,565) and the Master L at 31 million won. The Renault Master is a popular commercial vehicle in Europe, first introduced in that market in 1980.