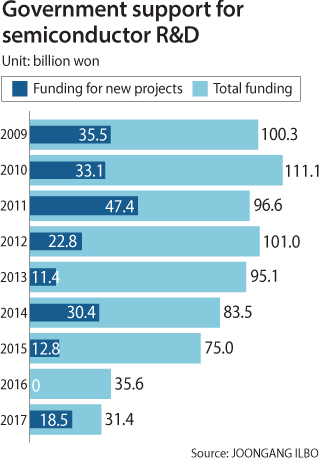 Samsung Electronics, the world’s largest chipmaker, and SK Hynix are expected to post great results in the third quarter thanks to strong semiconductor sales. But things are not looking great for Korea’s other semiconductor companies, especially equipment and materials makers, as they suffer from a lack of government funding and an unbalanced industry structure that offers few opportunities to cooperate with larger players.

Samsung Electronics announced an earnings guidance earlier this month that it expected third-quarter operating profits to reach a record 17.5 trillion won ($15.4 billion), which is 20.4 percent growth on-year. This would mean that the tech giant earned an average of 130 million won per minute over the past three months. Analysts say semiconductors account for around three-quarters of the company’s earnings.

Though SK Hynix has yet to make any official announcement, analysts estimate that the country’s second-largest chipmaker will post around 6.28 trillion won in operating profit for the third quarter. That is a 68 percent increase over a year earlier.

On average, Samsung Electronics and SK Hynix enjoyed an operating profit margin of 39.1 percent for the first half of this year.

During the same period, however, semiconductor equipment manufacturers had average operating profit margins of 13.5 percent, according to calculations made by the JoongAng Ilbo based on data from 166 listed companies in the semiconductor industry provided by Korea Exchange, the country’s exchange operator.

These companies manufacture the equipment and supplies necessary to fabricate semiconductors, not the chips themselves.

“If the operating profit margins for companies within the same industry vary significantly, it means there is a fundamental problem with how the industry is structured,” said Shin Kwang-seon, a public relations officer at Korea Exchange.

“There are barely any companies earning high profits [in the semiconductor industry] except for Samsung Electronics, SK Hynix and their partners,” said one industry spokesman who requested anonymity. “There is a huge imbalance in the industry.”

“While it is natural for the ‘rear industry,’ or companies that manufacture equipment and materials necessary for semiconductor production, to grow along with memory chips, that is not the reality in Korea,” said Choi Jae-sung, a professor of semiconductor equipment engineering at North Chungcheong’s Far East University.

Currently, only about 18.2 percent of semiconductor equipment used for chip production is made in Korea, with the rest hailing from countries like the United States and Japan, as Korean chipmakers find foreign equipment more reliable and technologically advanced.

A problem feeding into the weakness of the so-called rear industry is that Samsung Electronics and SK Hynix are both integrated device manufacturers (IDM), meaning that they carry out all processes of design, manufacturing and sales themselves. Because the IDM model does not outsource production to third parties, fewer companies can share in bigger companies’ success.

Critics argue that the government could do more to fund semiconductor research and development (R&D) to help strengthen smaller semiconductor firms and nurture domestic talent in the field.

It takes a company approximately 90 billion won to develop a single piece of test equipment for wafers, or thin silicon slices used for manufacturing semiconductors.

In the past decade, the government earmarked 81 billion won yearly for semiconductor R&D funding on average, with the amount decreasing every year since 2009.

“In most universities, the number of students who major in semiconductors halved,” said Park Jae-geun, chairman of the Korean Society of Semiconductor & Display Technology. “This is probably because they don’t think there are any attractive semiconductor companies to work for besides Samsung Electronics and SK Hynix.”

In 2017, only 43 students earned master’s degrees or Ph.Ds in semiconductor-related majors at Seoul National University, the country’s top national university. That’s half the number from 2007, when 97 earned graduate degrees in the majors.

“More people will study semiconductors if there are more small and medium-size enterprises that are doing well,” said Yoo Wan-sik, CEO of Semics, which manufactures semiconductor equipment. “We urgently need government policies to support cooperation between industries and educational institutions, and between larger and smaller companies.”

“Just as advances in artificial-intelligence technology will determine the competitiveness of [a country’s] IT industry in the future, it is crucial to receive investment to develop semiconductor technology and nurture experts in the field,” said Song Yong-ho, who teaches electronic engineering at Hanyang University.