[The Future is Now] Futuristic homes have already arrived

[The Future is Now] Futuristic homes have already arrived

Smartphones can now be used to control nearly all home appliances.

Sohn Eugene, a working mother, feels like she has been transported to the future.

In June her family moved to a brand-new apartment and Sohn ditched the old appliances she bought 10 years ago when she got married and replaced them with the latest tech. The new white goods opened her eyes to a whole new world of convenience that she never knew existed.

Initially, Sohn didn’t expect much from the new refrigerator she purchased under the Samsung Electronics’ Family Hub brand. Fridges are fridges, she reasoned.

The 41-year-old soon realized how wrong she was. These days she often finds herself calling out to Bixby, the artificial intelligence platform installed in the fridge that is activated by voice-command. Her new smart fridge can recommend recipes based on her family’s food preferences and allergies and display them on a gigantic touch-screen monitor embedded in the front of the appliance. The fridge’s artificial intelligence is even able to automatically detect what she puts in it without her having to provide details through the grocery-tracking cameras installed inside.

Barely having time to visit grocery stores during the week as a full-time office worker, Sohn simply checks what’s inside the fridge by looking at the screen as she leaves home in the morning and orders groceries on a smartphone app. The food arrives on her doorstep at a designated time.

“I am not such a great organizer and had to throw away so much produce that went bad because I didn’t even know it was in the fridge,” she said. “The new fridge is a life changer, saving so much hassle and cost.”

For In Hye-young, a PR manager at a game company in Pangyo, Gyeonggi, new technology has helped her enjoy her alone-time a bit more. Upon arriving at her studio apartment in Mapo, western Seoul, In habitually grabs a remote control and turns on her new 65-inch smart OLED TV from LG Electronics. When she watches a low-resolution video from a USB plugged into the TV, the machine learning system automatically converts it into a high-resolution version. The TV also optimizes sound to fit the types of video she watches - from baseball matches to live concerts and blockbuster movies.

Not only that, the combined artificial intelligence power of LG’s own Smart ThinQ platform and Google Assistant has made it possible for the tech-savvy consumer to control her air purifier and air conditioner.

The simple voice command, “I am hot,” will turn on the air conditioner and lower the temperature to one that she usually prefers - thanks to the system’s machine-learning capability.

In is even able to check that everything is safe and sound at home through her CordZero R9 ThinQ robot vacuum cleaner from LG, which moves around the house and detects movement. It automatically photographs strange objects with an embedded camera and immediately sends a notification to In’s smartphone. 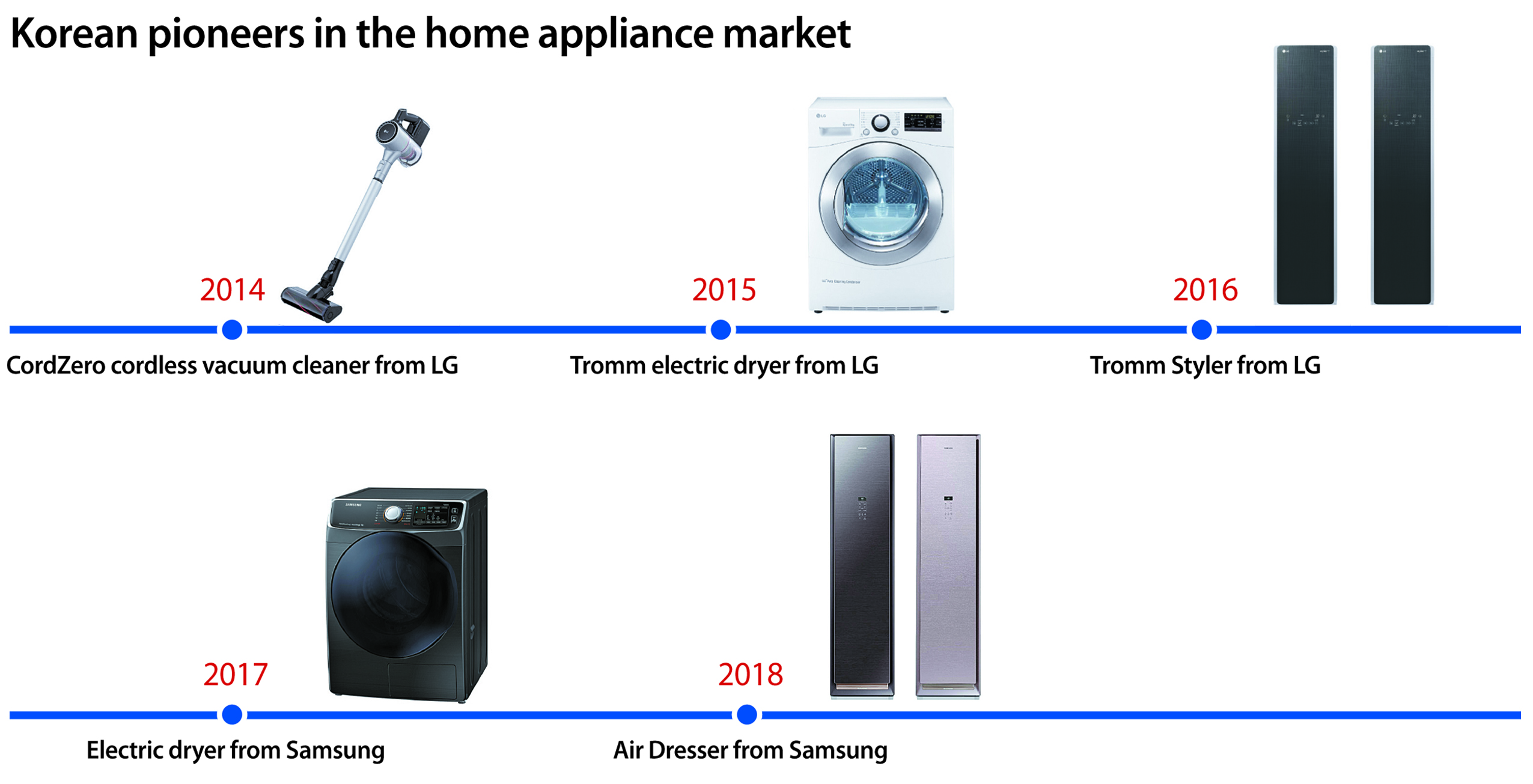 Living up to the hype

It has been a couple of years since home appliance makers began using “connectivity” and “smart” to promote new devices powered by Internet of Things technologies and artificial intelligence. Only recently have those buzzwords become a real game changer after the technologies evolved to a reliable level. Now white goods have leapt beyond their traditional functions to recognize users and provide services optimized for them, naturally penetrating everyday life.

“If 2017 marked the initiation of AI-enabled home appliances, 2018 will be about how the features of AI in a true sense have been applied to nearly all of them,” said Song Dae-hyun, president of the home appliance and air solution business at LG Electronics, at the beginning of this year.

He added that the chain of AI devices launched last year had limited ability - mostly space recognition - but they are now smarter and able to machine-learn space, situations and user patterns.

The massive supply of such smart home appliances - from refrigerators to TVs and air conditioners - has driven demand. According to industry sources, 45 million smart white goods were sold last year, with the figure expected to jump up to over 74 million this year. By 2021, the annual sales volume is projected at as much as 330 million. Samsung’s AI-enabled refrigerators, for instance, sold five times more in the first five months of this year than the same period a year ago.

New kids on the block

In tandem with the evolution of existing home appliances, new product categories have also sprung up - largely related to enhancing air quality at home and fighting the aftermath of exposure to fine dust. Clothes dryers and steam closets are the core examples.

“Consumers have been noticeably moving to find solutions to protect their own health as they grow more sensitive to environmental issues,” said Lee Seung-hyun, a member of Samsung Electronics’ strategic marketing team who is in charge of air purifier development planning.

Lee Dong-hyo, a single dad in his mid-40s, says he has been freed from the tiring chore of going back and forth between a dry cleaner and home at least twice a week to have his suits and shirts ironed and his daughter and son’s school uniforms cleaned after buying a steam closet in the summer.

In just 40 minutes or so, the clothes in Lee’s Tromm Styler garment management system come out fresh. The steam closet uses steam to refresh and sanitize clothes, removing odor, dirt and wrinkles - without the need for detergent.

“One of my colleagues gave me a tip about the Styler,” he said. “I wish I had known about it much earlier.”

Eyeing the exploding demand for the steam wardrobe products that have effectively been dominated by LG since the company invented the first of its kind two years ago, Samsung Electronics and Coway, a smaller player, jumped into the market this year.

Coway, a household name famous for rental services for water purifiers, began renting a device called Fresh Wear Styling System in May. Samsung’s Air Dresser promotes itself as different from LG’s Styler in its cleaning method. Air and steam are sprayed on garments in the Air Dresser from the top and the bottom to get rid of dust and odor, ridding clothes of 99 percent of the dust in garments in half an hour or so.

Koreans only recently fell in love with clothes dryers, albeit belatedly, as households grew increasingly concerned about worsening air quality. Dryers help reduce the reliance on weather conditions and drying laundry outdoors, until recently the only option for some households, as drying laundry indoors can pose health risks to people prone to allergies and asthma and contribute to the growth of dust mites.

According to industry data, just 100,000 clothes dryers were sold in 2016, five years after LG introduced Korea’s first heat pump-based dryer, a common system overseas. Sales figures have skyrocketed in the last two years, with between 1.3 million and 1.5 million expected to be sold this year. Depending on the result of the year-end shopping season, sales could even surpass 1.5 million. LG and Samsung now make up over 90 percent of the market, with smaller players such as Daewoo Electronics, Carrier, Winix and SK Magic joining the battle.

The change in consumers’ preference for home appliances has transformed the landscape in the so-called “wedding white goods” market, referring to the items that newly-weds tend to buy for their first home. Data in June from Hyundai Department Store’s wedding preparation division showed that couples bought more clothes dryers, cordless vacuums and air purifiers than ever before. At the same time, the demand for rice cookers, wired vacuums and microwaves dropped significantly.

The main reason consumers were initially reluctant to snap up cordless vacuums was the short battery life and weak suction power, but manufacturers have overcome the hurdles. Now up to 33-volt lithium ion battery packs can fully charge in four hours or so with a battery life of about 40 minutes, double that of models from a few years ago and more than enough time to clean most homes.

Initiated by Dyson’s success and prompted by the British brand’s copycats and similar-looking products - from LG and Samsung as well as Electrolux and Tefal - cordless vacuum sales are set to grow more than 100 percent in Korea this year. AI-enabled robot vacuums and mops have also jumped into the competition as people are increasingly inclined to minimize the time and labor spent on household chores.

“Sales of environment-related home appliances have been gaining momentum recently,” said Joo Young-hun, an analyst at Eugene Investment and Securities. “Their sales growth is likely to persist for a while due to the fine dust problem.”