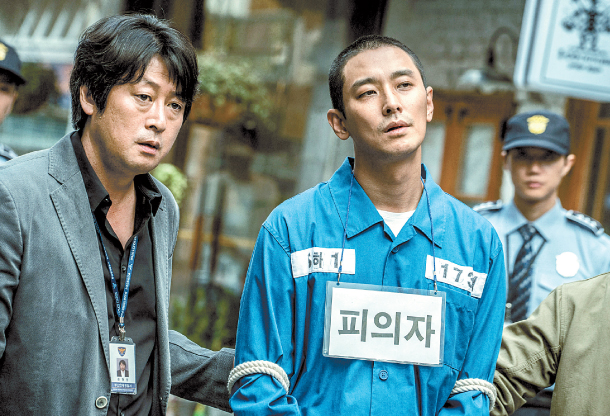 “Dark Figure of Crime” shot its way up to the top of the weekend box office in its second weekend, pushing aside Hollywood’s antihero flick “Venom.” [SHOWBOX]

According to data provided by the Korean Film Council on Monday, “Dark Figure of Crime,” starring Ju Ji-hoon and Kim Yoon-seok, topped Korea’s weekend box office from Friday to Sunday. In its second weekend, the crime drama sold 553,000 tickets at 1,064 screens.

The movie about a detective (Kim) who looks into additional crimes after hearing a confession from a prisoner (Ju) that he had committed additional murders, has now sold 2.83 million admissions since its release on Oct. 3.

Coming in at second was “Venom,” which landed a spot down from its debut weekend last week.

The stand-alone movie centering on Spider-Man’s nemesis Venom sold 494,000 tickets at 1,011 screens, boosting its total ticket sales to 3.25 million as of Sunday.

Starring Tom Hardy, the film centers on a disgraced, scandal-ridden reporter, Eddie Brock (Hardy), who attempts to revive his career by investigating a sophisticated and unscrupulous corporate survivalist group, the Life Foundation.

But after contacting an amorphous extraterrestrial symbiote that bonds with him, Eddie suddenly finds himself endowed with superpowers.

Some of the newly-released smaller budget movies also performed well in the weekend box office.

In particular, “Miss Baek,” a toned-down drama starring Han Ji-min, sold 161,000 admissions at 624 screens. The small budget movie, with a break-even-point of 900,000 ticket sales, is one of the rare movies centering on a female protagonist.

“Miss Baek” revolves around character Sang-ah (Han), a social outcast who was abandoned by her abusive mother in her youth. She was then convicted and jailed after trying to protect herself from the son of a powerful businessman who attempted to rape her.

After serving years in prison, she earned money by doing odd jobs from cleaning cars to giving massages to women.

The only person she interacts with is the detective Jang-sup (Lee Hee-jun), who always has Sang-ah’s back when she is in trouble. But Sang-ah refuses to open up even to this man who shows her unconditional love.

Things start to change for Sang-ah when she encounters a young girl who is endlessly abused by her young, game-addicted father and his two-faced girlfriend. Seeing herself in the youngster, Sang-ah’s life starts to revolve around protecting the vulnerable girl.

Coming in at fourth was Bradley Cooper’s directorial debut “A Star is Born.”

The musical romantic drama, which Cooper also co-wrote, sold 87,000 tickets in its debut weekend. Since its release on Oct. 9, the movie has sold a total of 153,000 tickets.

Casting pop star Lady Gaga as an unknown singer who becomes a pop sensation backed by Jackson Maine, played by Cooper himself, a famous country singer privately battling an alcohol and drug addiction, the movie is the fourth remake of the original 1937 film after the 1954 musical, the 1976 rock musical, and the 2013 Bollywood romance film.

A period epic, “The Great Battle,” about the fierce battle between Goguryeo (37 B.C. - A.D. 668) General Yang Man-chun (Zo In-sung) of Ansi and his troops and a large army from the Tang Dynasty, rounded out the top five.