Kazakhstan has advice on how to shed nukes

Kazakhstan has advice on how to shed nukes

The ambassador of Kazakhstan to Korea, Bakyt Dyussenbayev said that Kazakhstan’s experience with denuclearization can be an example for North Korea. 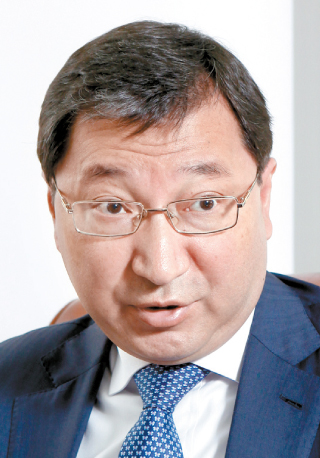 “We are very open to talk about our experience, the so-called Kazakhstani model of denuclearization,” Dyussenbayev told the Korea JoongAng Daily on Oct. 10. “Kazakhstan had the fourth largest nuclear arsenal of the world in its territory, but after the collapse of the Soviet Union, one of the first steps of our president was to sign the decree to close the biggest nuclear testing zone in the world at the time, the Semipalatinsk Test Site.”

Dyussenbayev said the decision was essential for the foreign investments that followed.

“This denuclearization process for Kazakhstan meant not only security guarantees for our country but also economic development - the flow of foreign investment into the country,” he said. “Since that period, Kazakhstan has become a voice for nonproliferation in the international arena. Maybe this experience can be useful for the Korean Peninsula.”

President of Kazakhstan Nursultan Nazarbayev, in 1991, signed the agreement to shut down the nuclear test site. He also signed agreements to disarm more than 1,400 nuclear warheads from the former Soviet Union and to invite inspections from the International Atomic Energy Agency.

At the time, it received funding from Washington, through the Nunn-Lugar Cooperative Threat Reduction Program, to ease the financial burden of the process. Former U.S. President Barack Obama called President Nazarbayev “one of the model leaders in the world on nonproliferation and nuclear-safety issues” at the Nuclear Security Summit in Washington in April 2010.

Dyussenbayev arrived in Korea on June 12, the date of the historic summit between U.S. President Donald Trump and North Korean leader Kim Jong-un in Singapore.

Noting that “a peace settlement seems closer than ever in the recent history of the Korean Peninsula,” the ambassador added that he welcomes all agreements from the summits, including talks on developing an inter-Korean railway that may also connect to Russia’s Siberian rail system.

To cooperate on the Eurasia railway system, South Korea joined the Organization for Cooperation of Railways in June; Kazakhstan is also a member.

“We completely support this initiative, as the transportation of goods from Europe to Asia by sea requires more or less 40 to 45 days, and using such a railway would reduce the time to two weeks or 10 days,” said Dyussenbayev, who was formerly his nation’s ambassador to Spain and head of the Europe Unit in the Ministry of Foreign Affairs of Kazakhstan.

As he begins his tenure in Seoul, the envoy said he hoped to see more cooperation in IT and digital innovation. Korea’s main exports to Kazakhstan are electronic goods and parts and synthetic resins. Kazakhstan exports crude oil, alloy iron and uranium to Korea.

“We have an intergovernmental commission on trade, economy and science between the two countries, and we are planning to organize the next meeting of this commission in the nearest future possible, because the last one was held in 2014,” he said. “The main objective of the commission will be to find new ways and new projects in different spheres, including in IT development and new technology, which Korea is famous for. We have a project called Digital Kazakhstan, an initiative spanning to 2022 to transform the digital innovation environment of the country, and we are interested in Korean know-how and technology and expertise in the sector.”

Hosting a visit by South Korean President Moon Jae-in is also on the table for the new ambassador.

The envoy added he also hopes to increase everyday people-to-people exchanges. “We have around 1,000 Kazakhstani students studying in Korea and the number is increasing year by year as more students take an interest in the Korean language and culture,” he said. “There are also more than 100,000 people of Korean descent in Kazakhstan - one of the very important ethnic communities in our country of some 130 ethnicities.”