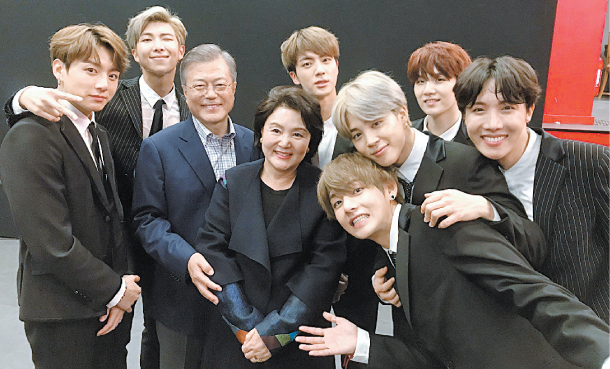 In the interview conducted ahead of his four-day state visit to France, Moon reflected on the inter-Korean summit held in Pyongyang from Sept. 18 and 20 and listed five signs that indicated that Kim was sincere in his pledge to denuclearize in exchange for security guarantees for his country and regime.

These include, said Moon, Kim declaring in April a “new strategic line” favoring economic growth; his pledge to the international community of a “complete denuclearization of the Korean Peninsula” in inter-Korean summits and the first North Korea-U.S. summit in June; and the demolishing of the Punggye-ri nuclear test site and Tongchang-ri missile engine test site.

Moon, according to a Blue House transcript of the interview, added that Kim stated during the inter-Korean summit in Pyongyang that he wants to “create a Korean Peninsula free of nuclear threat.”

North Korea, however, is “suffering great difficulty because of international sanctions and doesn’t have the ability to shoulder the retaliation from the United States and international community in the case it breaches denuclearization negotiations,” Moon said.

Le Figaro on Sunday described Moon as resembling an “Asian Harry Potter,” but noted his “steel determination” as he plays a mediating role between the unpredictable U.S. President Donald Trump and North Korean leader Kim. It noted that Moon is bringing a “new stage of his diplomatic offensive,” delivering a reconciliatory message toward Pyongyang through a nine-day, five-nation Europe tour that kicked off in Paris.

Moon said that he believes that a declaration to end the 1950-53 Korean War “could be the starting point toward establishing a peace regime” on the Korean Peninsula.

He added, “In the future, depending on the progress in the North’s denuclearization, there can be an agreement to open a North-U.S. liaison office and the alleviation of sanctions.”

But Moon pointed out that the international community “needs to show that Chairman Kim’s decision to denuclearize is the right decision and continue to lead North Korea to the path of permanent and stable peace,” while recognizing “this is just the beginning, and will not be an easy road.”

He went onto describe the “final goal” of denuclearization as the “scrapping of all of North Korea’s nuclear facilities, along with its existing nuclear weapons and materials.”

Moon reflected on Korea and France “advancing friendly relations for over 130 years,” having established diplomatic relations in 1886, and weighed in on K-pop’s global appeal.

“Koreans are people full of passion and enthusiasm, and I am very proud of this as it bridges generations, overcomes language barriers and has the power to bring everyone together,” Moon told Le Figaro. “I believe K-pop, which is loved by Europe and the world, is an expression of Koreans’ passion and enthusiasm.”

On Sunday afternoon, Moon and South Korean first lady Lee Jung-sook attended the Korea-France Friendship Concert at Le 13eme Art theater in Paris, attended by some 400 people including French officials and Korean studies students of seven Paris-based universities. The two-hour performance had the theme “Resonance of Korean Musicians” and included both traditional Korean performances and a major splash of Hallyu as K-pop sensation BTS performed their hits “DNA” and “Idol.”

Moon got a lot of attention on social media after embracing BTS member RM backstage after the concert. He and the first lady posed for a photo with the Billboard 200 chart-topping boy band, which is in the middle of its “Love Yourself” world tour, which includes a show in Paris. Moon was set to hold a summit with French President Emmanuel Macron Monday.

They were also expected to discuss North Korea, improving bilateral ties and economic cooperation and further developing their bilateral strategic partnership. Moon and Macron last held talks on the sidelines of the Group of 20, or G-20, summit in Hamburg, Germany, in July 2017. France is one of the five permanent members of the UN Security Council, so Moon could discuss sanctions on the North, according to Le Monde. Moon was also scheduled to take part in a wreath-laying ceremony at the Tomb of the Unknown Soldier and attend a state banquet hosted by the French president and his wife, Brigitte Macron, at their official residence, the Elysee Palace. On Tuesday, Moon will attend a reception at Paris City Hall.