Work on roads, rails get serious for two Koreas

Work on roads, rails get serious for two Koreas 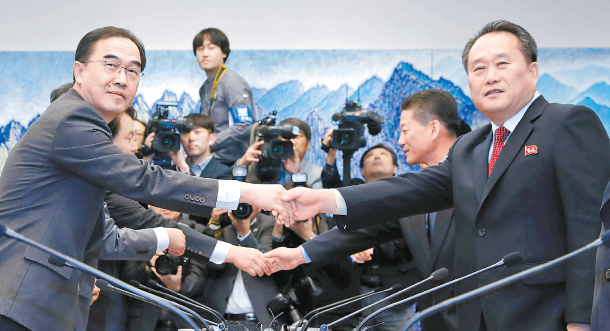 The two Koreas agreed in a high-level meeting Monday to hold a joint ceremony some time between late November and early December to mark the start of working to modernize and link roads and railways connecting the two countries along the seas.

The event was one of seven major agreements reached by officials from Seoul and Pyongyang in the latest high-level talks held in the Peace House, a South Korean-controlled building in the truce village of Panmunjom. The meeting was meant to hammer out agreements in the Pyongyang Declaration, signed by South Korean President Moon Jae-in and North Korean leader Kim Jong-un on Sept. 19 during their third summit.

According to a joint press statement issued by the South’s Unification Ministry on Monday, the two Koreas decided to jointly investigate railways along the Yellow Sea from late this month and kick off similar work on railways along the East Sea from early November.

Plans to jointly investigate roads running along both coastlines will be specified through further discussions, according to the press statement.

An inter-Korean sports meeting is planned for late October at the joint liaison office in the North Korean border town of Kaesong to discuss plans to make a bid to jointly host the 2032 Summer Olympics. They are also expected to negotiate forming combined teams for the 2020 Tokyo Summer Olympics and other international events.

A high-level military meeting between generals from both countries will be held in the near future to work out a military agreement signed last month, which mentioned easing military confrontation near the demilitarized zone and establishing a South-North military committee.

A Red Cross meeting has been scheduled for November at the North’s Mount Kumgang resort to discuss issues pertaining to the reunion of families separated by the 1950-53 Korean War, including renovation work for a building within the resort where many reunions were held in the past.

Later this month, both Koreas will also hold a meeting at the Kaesong liaison office to discuss transmittable diseases and ways to prevent their spread. On Oct. 22, the countries will hold forestry talks to discuss the protection of the ecosystem, modernization of tree nurseries and control of pine wilt disease at the same office.

The two Koreas further agreed to discuss working-level matters in the near future regarding a concert Pyongyang musicians are planning to hold in Seoul soon. The Pyongyang Declaration says that the concert will be held some time in October, but a specific date was neither specified in the declaration last month nor in the joint press statement on Monday.

Aside from the joint press statement, South Korea’s Cultural Heritage Administration announced Monday that North Korean officials suggested to the group they launch a joint excavation of Manwoldae, a Goryeo Dynasty (918-1392) royal palace in Kaesong, on Oct. 22.

The South initially asked the North to resume the stalled project on Sept. 27, but the North refused, citing a lack of preparation. The joint project first began in 2007 but was halted in 2015 amid North Korea’s provocations.