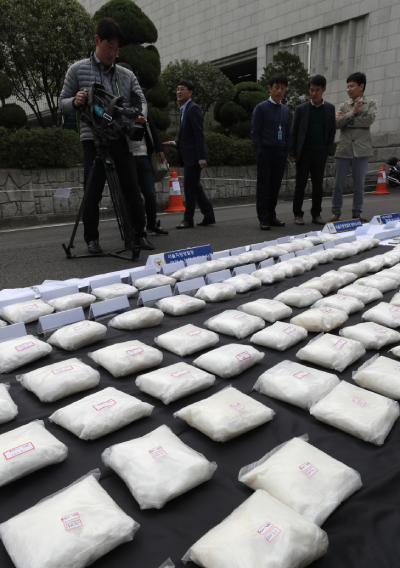 Police display bags of methamphetamine, part of the 112 kilograms of the drug that the police confiscated, at the Seoul Metropolitan Police Agency on Monday. [YONHAP]

Korean police said Monday they have arrested six members of a drug trafficking syndicate involving Taiwanese and Japanese organized crime rings in connection with the smuggling of 112 kilograms (246 pounds) of methamphetamine into the country.

The amount was the largest seizure of the drug ever in South Korea. The drugs had an estimated street value of 370 billion won ($326.56 million), according to police.

The six people arrested included a 25-year-old Taiwanese, a 32-year-old Japanese and a 63-year-old South Korean.

The Seoul Metropolitan Police Agency said the Taiwanese obtained a screw making machine from a ship in the southeastern coastal city of Busan, which departed from Bangkok on July 6 this year. Inside the machine were 112 1-kilogram bags of methamphetamine.

The Taiwanese, along with a Taiwanese accomplice, transported the machine to a warehouse in the city of Hwaseong, near Seoul, that he was renting. They took the machine apart and stored the drugs in apartment in Seoul that he was also renting.

In July and August, the Taiwanese gave 22 kilograms of the drug to a Japanese dealer who has yet to be arrested. The 34-year-old Japanese later sold the methamphetamine to the Korean suspect for 1.1 billion won.

After learning Korean investigative authorities were moving to bust the syndicate, the Taiwanese attempted to leave the country on Aug. 26. He was arrested at Incheon airport. The remaining 90 kilograms of the drug were confiscated.

Police are looking for four main culprits who are believed to have given instructions to the six arrested suspects. The police have secured arrest warrants for the four from their corresponding countries.

The drug smuggling involved affiliated groups of the Taiwanese syndicate Zhulianbang, or the Bamboo Union Gang, and the Japanese Inagawa-kai crime syndicate, police believe. Korean drug dealers, which have no connection with drug making organizations, are believed to have depended on the crime syndicates.

They have also asked the Thai police to track down the shipping details for the screw making machine to get leads on how the methamphetamine was smuggled.