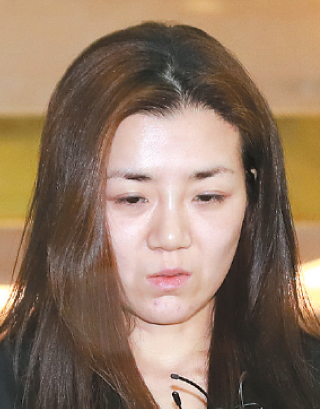 Prosecutors on Monday decided not to charge Korean Air heiress Cho Hyun-min with assault following accusations that she threw a drink and a glass cup at an advertising executive in a fit of rage during a meeting in March.

The public disclosure of Cho’s outburst triggered a massive backlash from Korean Air employees and the public at large, leading to a series of accusations from insiders on a host of wrongdoings by the Cho family and its patriarch, Cho Yang-ho, who prosecutors said on Monday they would indict without detention on charges of misappropriation and embezzlement.

The Seoul Southern District Prosecutor’s Office said that the allegation that Cho threw a glass on the ground during a business meeting in March cannot be considered assault since the cup was not directly thrown at a person.

Further abuse charges stemming from accusations that the heiress threw paper cups filled with fruit juice at advertising agency employees were also thrown out because the victims did not seek punishment, prosecutors added.

Press reports of Cho’s actions in April - emerging only four years after the infamous “nut rage” scandal in 2014 when her elder sister Cho Hyun-ah grounded an international flight because of how she was served macadamia nuts - set into motion a string of internal denunciations against the Cho family, accusing them of a wide range of wrongdoings including embezzlement of company funds, smuggling, power abuse, and of course, unfettered rage.

Since then, the family became a quasi-permanent fixture in domestic news, prompting investigations by police and prosecutors into the allegations.

After a four month probe that began in June, prosecutors on Monday said they would indict Korean Air and Hanjin Group Chairman Cho Yang-ho, 69, for eight separates charges including embezzling a total of 27.4 billion won ($24 million) in company funds.

Cho is accused of taking 19.6 billion won from company funds between 2003 and May 2018 by awarding a family owned business a contact for brokering purchases from suppliers of duty free items sold on Korean Air flights.

He is also suspected of operating a pharmacy in Incheon under a false medical license and receiving 152 billion won from the state’s health insurance agencies in benefits from 2010 to 2014. Prosecutors say this action constitutes a violation of medical laws.

Moreover, he has been accused of using company funds to pay off 1.7 billion won in legal fees incurred after his eldest daughter Cho Hyun-ah was indicted over the nut rage case.

A fourth allegation, that he and his siblings evaded some 61 billion won in inheritance tax after receiving foreign assets from their late father, Hanjin Group founder Cho Joong-hoon, was lifted by prosecutors, who said the statute of limitations had already expired for this case.

Prosecutors, however, decided not to seek a detention warrant for the chairman at this time, given that their previous attempt to do so in July was turned down by the court. Further investigations since then have not yielded additional evidence justifying detention, which is often granted when defendants are likely to tamper with existing evidence.

Nonetheless, the Cho family is likely to remain in the public eye since prosecutors have yet to reach a conclusion on a host of allegations, including one that Lee Myung-hee, the family’s matriarch, and Cho Hyun-ah illegally hired foreign workers and engaged in offshore tax evasion. Lee herself faces charges of assaulting and insulting employees after footage from 2014 showed her attacking workers at a construction site.

Investigations into accusations that the family used Korean Air planes to smuggle luxury goods into the country without paying tax are still ongoing.