[News in focus] U.S. Treasury warns banks to stay out of North

[News in focus] U.S. Treasury warns banks to stay out of North 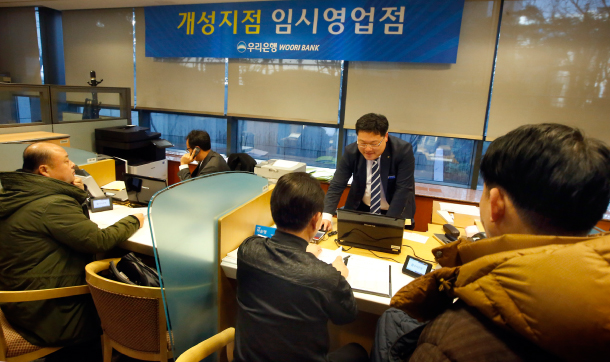 Major Korean banks have come under scrutiny for trying to reopen branches in North Korea as the United States reiterates its continued support for United Nations sanctions on Pyongyang.

The U.S. Department of the Treasury contacted seven Korean banks including the Korea Development Bank, Shinhan, KEB Hana, Woori and KB Kookmin last month to urge them to comply with UN sanctions on North Korea.

The move, revealed in Korean media on Oct. 12, had the desired effect. Financial institutions have pulled back from preparations for potential inter-Korean economic projects.

“It is true that the atmosphere has changed,” said a source at one of the banks who requested anonymity.

“Before the conference call, we tried to promote different internal initiatives to run businesses in the North, but now we are keeping a low profile,” the source said.

The U.S. Treasury Office contacted the banks at some point from Sept. 20 to 21, with a vice director-level official from the U.S. government contacting officials in charge of compliance issues at the banks, according to another source from one of the banks.

“It wasn’t like a stern warning, but more of a request to make sure that we all operate business in accordance with UN sanctions,” the source said.

Local banks such as Woori Bank and Nonghyup Bank had reorganized divisions and human resources to prepare for the reopening of their branches in North Korea.

Woori Bank won permission to operate in the Kaesong complex in 2004 after it beat out five other bidders, including other state-run banks. It provided money transfers and cash deposit and withdrawal services to 123 companies in the complex and their workers until 2016, when it closed its doors after the inter-Korean initiative was suspended.

Nonghyup Bank is counting on the resumption of tours to Mount Kumgang in the North.

The bank ran a branch from 2006 to 2008 in the Mount Kumgang tourist zone, a special administrative region in the North that South Korean tourists were allowed to visit.

Lee Dae-hoon, CEO of Nonghyup Bank, confirmed that the preparation process will be carried out in line with sanctions.

“We will take into account UN sanctions and other U.S. restrictions when we prepare for the possible reopening of the branch at Mount Kumgang,” the CEO said on Tuesday during a regular audit reporting session at the National Assembly.

Still, opinions vary regarding the tone of the U.S. Treasury.

Rep. Kim Seon-dong of the main opposition Liberty Korea Party said that the content of the call was closer to a stern warning, while the Ministry of Foreign Affairs, financial authorities and sources in the banking industry said that it could be categorized as monitoring or outreach activities.

“Meetings with compliance officials are usually made public, but it wasn’t the case,” Kim said last Friday during an audit of the Financial Supervisory Service. “This indicates sensitive issues were discussed.”

Financial Supervisory Service Chief Yoon Suk-heun countered, saying that the “U.S. Treasury asked the banks to follow UN sanctions and they said they will. The banks see the contact as a monitoring measure.”