The Blue House Four must answer

The Blue House Four must answer 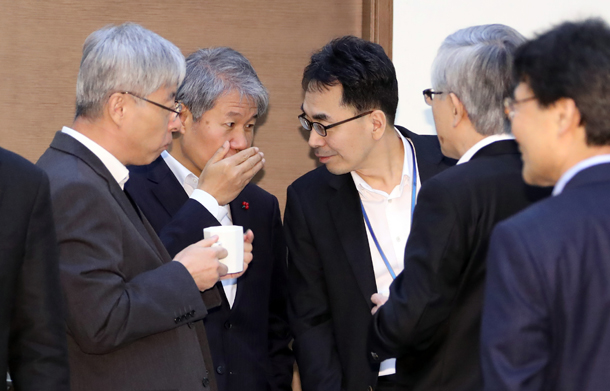 As the policy is justified and reasonable, the “Blue House Four” should not have negative connotations. When the minimum wage goes up, the incomes of low-income earners increase, which expands household spending and leads to increased production and investment by businesses. Once a 52-hour workweek is implemented, more employees are needed, and hopefully companies will hire more. Expanding the number of civil servants offers opportunities to young people. Upgrading irregular jobs into regular employment ensures a stable living for workers.

It would be nice if the policy would generate immediate outcomes, but the reality is not matching expectations. Since the income-driven growth policy was adopted, the employment situation has deteriorated and the economy is losing steam. While major economies such as the United States, Japan and Germany have improving job markets, unemployment in Korea has been above 1 million for nine consecutive months. About 300,000 people were newly hired per month on average last year, but the number dropped to 100,000 this year, and in the past three months it has shrunk to several thousands to tens of thousands.

So it seems that Chu attacked openly because he didn’t want the policy to go on. In a personal statement on October 12, when the September employment statistics were released, he vented that the Blue House was ordering public agencies to create two-month short-term positions. He claimed that the Blue House was encouraging temporary employment when it had pledged to create quality jobs.

Even the best of intentions could fail when they clash with reality. In the age of low growth, at about 2 percent, policies that do not contribute to the health of companies and the market may bring an employment disaster and further contribute to slowing growth. Chu has called for the Blue House Four to be replaced, changes in economic policy and drastic regulatory reform and restructuring. It is now the Blue House Four’s turn to answer.