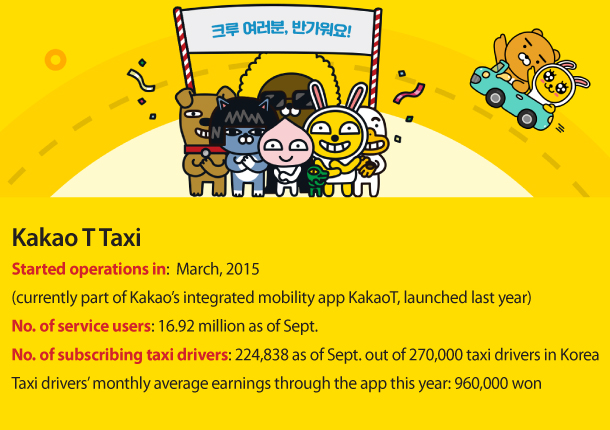 Kakao Mobility has opened recruitment for its carpool app, infuriating taxi drivers who are vehemently opposed to the move.

According to the mobility company that operates taxi-hailing app Kakao T, recruiting drivers is one of the crucial steps in preparation for the launch of its carpool service. The hiring process opened on Tuesday with the launch of a driver registration app, dubbed Kakao T Carpool for crews.

Kakao Mobility was quick to point out that recruitment does not mean it will immediately launch a carpool app, adding that there is no set date for release. Instead, Kakao is looking to move drivers registered on Luxi to the new Kakao app, although this process will mean that it has a pool of drivers readily available, allowing it to immediately launch the app whenever it wants.

Kakao Mobility has actually been attempting to launch its own carpool service since it acquired Luxi for 25.2 billion won ($22.4 million) in February. At the time, the company made it clear that it would only use the carpool service to cover shortages in taxis during peak hours, “within the legal boundaries.”

Kakao’s statement did little to appease taxi drivers back in February, and they’re not any happier with the service now. Korea’s taxi drivers are fiercely opposed to ride-sharing apps, which they consider an unlicensed threat to business.

This is the main reason why popular international ride-hailing companies like Uber are illegal in Korea under Article 81 of the Passenger Transport Service Act, which says that personal vehicles cannot be exploited for business purposes.

Carpooling services, however, have been operating by taking advantage of a loophole that says that carpooling during commuting hours is permitted. Still, the vagueness of the term “commuting hours” has caused conflicts between carpool service providers and taxi drivers.

Taxi drivers argue that Kakao is taking work away from them. As Kakao operates Kakao T, which thousands of taxi drivers rely on for work, the feeling of betrayal is even stronger.

“It feels as if we are being backstabbed by Kakao, who we have been thinking of as a business partner,” said a spokesperson from the Korea National Joint Conference of Taxi Association, a group representing over 100,000 corporate taxi drivers nationwide, in a phone call Tuesday. “I can’t believe Kakao is making this announcement without delivering any message to drivers who have been holding a series of rallies against the company’s plan to start the carpool business.”

The drivers held two rallies in Pangyo, Gyeonggi, where the Kakao Mobility office is located, on Oct. 4 and 11. About 500 people gathered at the second rally from four taxi driver unions, including the Korea National Joint Conference of Taxi Association. Tomorrow, a bigger protest is due to take place in Gwanghwamun Square in central Seoul at 2 p.m.

To participate in tomorrow’s rally, about 4,000 drivers from Incheon, about half the city’s taxis, are expected to walk out, according to Incheon’s taxi association. About 2,000 taxis in Jeonju, the capital city of North Jeolla, are also due to stop operations for the rally, according to the city’s government.

Some other cities are also facing similar problems as taxi drivers say they will leave for the rally.

Despite the controversy, Kakao Mobility maintained Tuesday that carpool apps could be a great complementary service for taxis, citing data that on Sept. 20 there were 205,000 calls for taxis on the Kakao app from 8 a.m. to 9 a.m., but only 37,000 taxis were available.