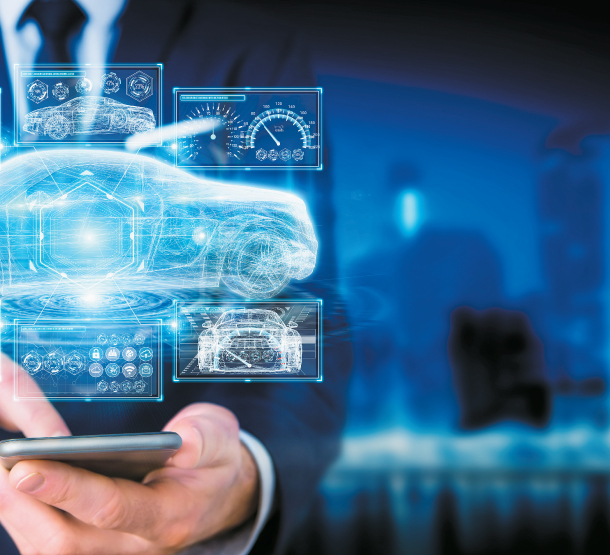 There was a time not so long ago when cars were nothing more than a mere means of transportation.

The ability to safely deliver passengers from A to B determined a car’s market value. Robust hardware such as strong steel plates and durable engines were what consumers were looking for when they purchased a car.

Those days are long behind us.

With the rapid advancement of connectivity and smart car technology, cars have moved well beyond merely transporting passengers.

As a result, the in-vehicle experience - a complicated system managed by a huge amount of software - has become the competitive edge for cars. How high-tech an infotainment display looks and how much entertainment it can provide are the new standard in evaluating a car’s value.

No wonder the world’s biggest IT firms like Google, Apple and Microsoft are jumping into the industry.

“Carmakers no longer compete in hardware because it is easily imitable, hence it generates less value in the long-term,” said Chang Sae-jin, a professor in the business department at Korea Advanced Institute of Science and Technology. “Hardware will degenerate to become a commodity, whereas competition in software will become fiercer than ever.”

Left: The reporter tries out the voice-recognition function from Kakao installed in Hyundai Motor’s Tucson SUV on Oct. 8. Right: The reporter gives orders to KT’s artificial-intelligence speaker Genie to try out the home-to-car service. [PARK SANG-MOON]

Hyundai Motor, Korea’s No. 1 automaker, has partnered with more than 10 software firms this year, an unprecedented number of partnerships to be made in a single year, in its initiative to take the upper hand in the burgeoning industry.

The collaboration with SoundHound is already paying dividends in Hyundai Motor’s latest lineup.

SoundHound’s audio-recognition function is being used to analyze the music playing on the radio in a car to allow the system to display the name of the singer and the song title on the center screen. The service was previously available on smartphones, but this is the first time it has been installed in a car in Korea.

Hyundai Motor has also joined forces with Kakao to utilize the IT firm’s voice-recognition function and massive database collected from its search engine business.

Through Hyundai Motor’s in-house connected service Blue Link, which acts as a gateway between orders made from exterior sources and the vehicle, the embedded navigation provides real-time traffic information to offer the shortest route to a destination.

His words turned out to be true. The embedded navigation system, which would often lead drivers through heavily congested roads when traveling between Gwanghwamun Square in central Seoul and Gangnam Station in southern Seoul, surprising chose a route that used small, unpopular roads to cut down on the journey time by as much as 20 minutes.

The carmaker’s foray into the smart car-related software industry will continue into the future as Hyundai Motor Executive Vice Chairman Chung Eui-sun recently pledged to become a “smart mobility solution provider,” moving away from its 50 years of history of focusing on hardware.

Already on the market

“Genie-ya, turn on my car’s engine and set the temperature to 20 degrees Celsius [68 degrees Fahrenheit].”

With this simple command, users can now turn on their car engine and warm it up, all from the comfort of their living room. A small change it may be, but being able to adjust temperatures can really make a significant change to users’ comfort levels.

This system is the result of a partnership between Hyundai Motor and telecommunication company KT to provide a so-called home-to-car service. A voice order given to KT’s smart speaker GiGa Genie is transferred to Blue Link to control the basic functions of a car.

It could also lock the door, turn on the emergency lights and, in the case of an electric vehicle, charge itself with a simple voice command.

Starting with its latest Tucson SUV, Hyundai Motor plans to install the service in its future lineup. Kia Motors has also recently installed a similar system in partnership with SK Telecom in its Sportage SUV.

“This service could later be expanded to car-to-home services as well where the driver can control diverse electronic devices at home inside their car,” said Kim from Hyundai Motor’s connectivity team.

The 2019 Mercedes-Benz E-Class has been launched with a concierge system that not only makes restaurants and hotel recommendations, but also makes reservations and directly guides cars to a location by sending the address to the embedded navigation system.

“Stable connectivity is the most important factor in enabling all these functions,” said Sam Lee from Mercedes-Benz Korea, who handles the connected service. It is currently partnering with KT to use its network.

Acknowledging the importance of software development, the Korean unit of the German carmaker said it launched a separate 30-person strong R&D team in 2016.

“The team is dedicated to developing diverse infotainment and navigation systems,” the Mercedes-Benz Korea official said.

The connected car industry is at a tipping point.

The industry is expected to be worth 113 billion euros ($130 billion) by 2020, expanding by nearly four times compared to the 31 billion euros market in 2015, according to Strategy&’s market data. Carmakers are hurriedly introducing their prototypes to take the lead in the yet-to-mature market.

“Once the software technology is standardized, it is hard to either imitate it or chase it,” said Chang. “That is why automakers are furiously investing in software firms right now.”

Hyundai Motor’s partnership with Kakao will add Kakao Mini, the IT firm’s smart speaker, to vehicles. This will add all of the speakers functions to the cars. At the moment, Kakao Mini can read the news, read fairy tales, order take-out food and send KakaoTalk messages to friends.

Hyundai Motor said it would implement these services, as long as they do not intervene with driving, into cars in the near future.

The partially autonomous hydrogen-powered Nexo which Hyundai Motor demonstrated early this year has a karaoke system in the back seat in collaboration with SM Entertainment. Passengers can also check their heart rate and consult with a doctor through the infotainment screen installed in the back.

Mercedes-Benz’s latest infotainment system, dubbed MBUX (Mercedes-Benz User Experience), is expected to be another game changer once it enters the market, presumably next year when it starts mass production on its A-Class sedans. On top of voice-recognition functions and the AR navigation display, the MBUX will be able to have simple conversations with the driver with the installed artificial intelligence.

Instead of “set the temperature to 20 degrees Celsius,” the vehicle will already know what to do when the passengers says “I am cold.” The carmaker said the software will continue to learn how to respond with its deep learning algorithm.

The industry’s rapid rush into connected services has lead auto giants like BMW, Ford, Renault-Nissan and most recently Volkswagen to collaborate with Microsoft to use its cloud technology Azure to connect vehicles to the internet.

“Smartphone functions will be delivered to cars,” said Chang. “They’ll be like smartphones on wheels.”