China’s tourists are growing source of foreign exchange for North

China’s tourists are growing source of foreign exchange for North

To commemorate the 53rd anniversary of its founding, the JoongAng Ilbo is running a special series of reports on the development of a market economy in North Korea. The JoongAng Ilbo teamed up with the Institute for National Security Strategy (INSS), a national security research institute under the National Intelligence Service, to interview recent defectors on the current state of North Korea’s economy. Names have been withheld or changed for the defectors’ security and that of their families still living in the North. - Ed. 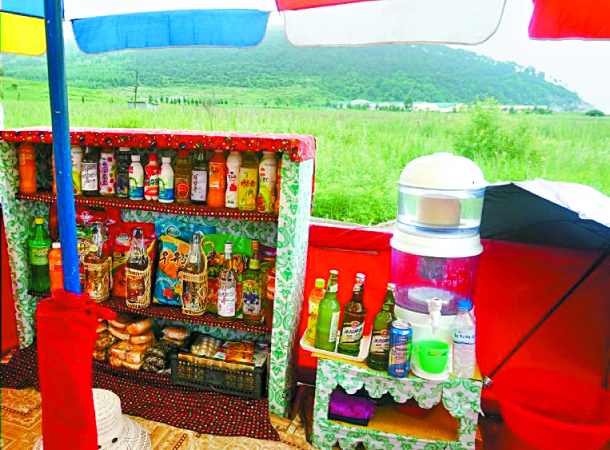 A roadside stall near the border with China, where North Korean vendors sell domestically produced foodstuffs, drinks and alcohol. [A JoongAng Ilbo reader]

Bereft of its primary source of income - coal exports to China - the North Korean regime is seeking new ways to make money, legal or otherwise.

Tourism is a preferred method, tapping into a nearly limitless pool of Chinese visitors looking for a unique place to visit.

“The regime is instructing workers that tourism is a key industry, using the Mount Kumgang tours by South Koreans as an example,” said one defector familiar with the country’s travel business. “It is expanding tours to regional cities like Sinuiju, Hyesan or Rajin-Sonbong aside from official tours of Pyongyang.”

Tour packages to North Korea are once again commonly sold in China, but that wasn’t the case just a few months ago. Last July, the Chinese government banned all tour packages to North Korea in response to accusations by the U.S. that it was deliberately lax on enforcing the international sanctions put on Pyongyang by the UN as a result of the regime’s nuclear and missile tests.

In Linjiang, Jilin Province, located just across the Yalu River from Chungang County in North Korea, travel agents busily gather local tourists for a single-day trip across the border to Hyesan, the capital of North Korea’s Ryanggang Province.

Despite the fact that it is technically a trip abroad, the tour requires no passports for the Chinese travelers, only domestic identification cards. But tourists are carefully monitored and followed by North Korean overseers, and they see only what their guide chooses to show them.

There are also tour packages that allow Chinese to drive their own automobiles into North Korea, according to one defector familiar within the industry. Of course, North Korean minders must accompany these tourists in their vehicles.

“It is unclear what kind of agreement was reached between North Korean and Chinese officials that led to these trips,” said the defector. “I think the Chinese tours were approved by a customs office or at least at the level of a provincial government.”

Early last month, North Korea began offering tourists in China and elsewhere the unique opportunity of attending the mass games and art performances commemorating the 70th anniversary of its founding on Sept. 9.

According to broadcaster Voice of America, an average of eight flights a week take place between Beijing and Pyongyang. Flights once banned have now resumed between regional Chinese cities and North Korea’s capital.

Pyongyang also recently signed a contract with an Italian company called Mistral Tour to include visits to North Korea as part of a 15-day package trip across China and both Koreas. The tours are set to begin next March.

In North Korea, tourists help the country by bringing in foreign exchange to buy indigenous products, ranging from Taedong beer to seafood banquets.

One product that stands out as a major cash cow for North Koreans is the mitten crab - known locally as hairy crabs due to their furry claws. Hairy crabs from Shanghai are well known in Asia and prized while in season during autumn. North Korea produces them, too.

“Official exports of seafood are illegal due to international sanctions,” said one defector who lived in the Rajin-Sonbong area. “Though Chinese customs regularly check products from the North, they legally allow Chinese visitors to take back up to five kilograms (11 pounds) of mitten crabs per person.”

One kilogram of hairy crabs goes for $10 in North Korea, and sells for up to $70 in China. Tourists from China can easily make up the cost of a day trip to the North by selling the crabs back home, the defector said.

Shuttle traders in China take day trips to Rajin-Sonbong in North Korea, where they buy crabs in bulk to sell in cities like Hunchun.

The North Korean government has also jumped on the seafood bandwagon, operating a major seafood restaurant right next to the customs office on its border with China to accommodate visitors.

Vendors can also be seen selling foodstuffs and alcohol in makeshift stalls on both sides of the border, while North Koreans have also been witnessed in Yanji - the seat of the Yanbian Korean Autonomous Prefecture in China - peddling bread, soft drinks, beer and other alcoholic beverages made in the North.

But food and booze are not the only merchandise sold by North Koreans. According to a report on Sunday in the Tokyo Shimbun, a Japanese newspaper, North Koreans have been caught selling drugs in China for the first time in seven years.

Citing a source in Beijing, the newspaper reported that a North Korean exporter resorted to selling illegal drugs made in the North in Yanbian, China, as a way of earning foreign currency by taking advantage of loosened controls at the border since North Korea began making overtures to its neighbors.

Analysts say the fact that the North’s traders have resorted to such a dangerous business as drugs - punishable by death under Chinese law - suggests they are strapped for cash as a result of international sanctions.

According to China’s General Administration of Customs, the agency responsible for the country’s imports and exports, the total volume of bilateral trade between China and North Korea totaled $1.58 billion in the first half of 2018 - a 58 percent decrease from the first half of last year, while North Korea’s total exports to China dropped almost 90 percent compared to last year.

One North Korean defector who used to do business in Southeast Asia said making money abroad by bypassing international sanctions is a daily test of one’s business skills.

“There is a prevalent belief in North Korea today that the country is immune to sanctions since they have been so frequently imposed by the United States over the last 70 years,” he said. “But it is true that the last two rounds of international sanctions (referring to UN resolutions 2375 and 2397) have narrowed business opportunities.”

Nonetheless, he added, one has to follow the party’s orders and make money regardless of legal niceties. To bring foreign currency or products into Pyongyang, methods of bypassing prying eyes have been developed.

When a person’s name appears on the U.S.’s North Korean watch list, for instance, one can easily get a new name with a new passport. A defector who worked as a diplomat said he frequently witnessed colleagues getting new names after returning home - all tacitly sanctioned by the government.

Another method is to use a third country to launder the origins of traded goods.

“Foreign suppliers also have to make money,” said another defector who used to do business in Southeast Asia. “They say they don’t sell products to North Korea, but eventually come around and tell you methods to bypass the ban when you offer them more money.”

He said these methods often involve sending the products first to China or Russia, where they are “laundered” to be shipped to the North. “As long as the products are not packaged in large containers like coal, smuggling them into the North is possible.”

Trade documents and stamps can easily be acquired with an additional fee of $300 to $500, he added. “As long as falsified documents and bribes are given, all traces of the transaction can be erased.”

“Despite the diversity of these attempts at bypassing the international sanctions on Pyongyang’s part,” said Lee Sang-geun, a researcher at the INSS, “results have been insufficient to reduce the burden on North Korea’s economy.”